February 14th, 1990 was not any extraordinary Valentine’s Day here on Earth. Couples dined, candles flickered, hands were held. On a day characterized by love, companionship, and joy, an enormous marvel of human ingenuity named Voyager One was embarking on a solitary trip into the cosmos. Initially launched 13 years previous by NASA to explore the universe, this spacecraft stood alone in the silent void of deep space, six billion desolate miles away. As its mission neared the end, Voyager One snapped a photograph of Earth. An unfathomable photo, depicting our planet as a humblingly tiny pixel in a massive universe, famously described as the “pale blue dot” by the late Carl Sagan.

“From this distant vantage point,” he described, “the Earth might not seem of any particular interest. But for us, it’s different. Consider again that dot. That’s here. That’s home. That’s us. On it everyone you love, everyone you know, everyone you ever heard of, every human being who ever was, lived out their lives … the Earth is a very small stage in a vast cosmic arena … Think of the endless cruelties visited by the inhabitants of one corner of this pixel on the scarcely distinguishable inhabitants of some other corner. How frequent their misunderstandings, how eager they are to kill one another, how fervent their hatreds. Our posturings, our imagined self-importance, the delusion that we have some privileged position in the universe, are challenged by this point of pale light.”

However, one need not travel to the ends of the universe to experience a pale blue dot for themselves. Lurking amidst the flowing IV lines, flashing telemetry monitors and rhythmic ventilators of the intensive care unit lie dozens of pale blue dots disguised as lifeless, intubated and sedated bodies.

Prior to arriving at the hospital, Mrs. G was one of those bodies, a healthy 65-year-old mom, grandmother, and wife. Mrs. G had tripped and fell down the steps, fracturing her femur. Unknown to us at the time, the fall also injured her chest wall, causing a slow and steady leak of blood into the sac surrounding the heart. Two days into her hospitalization to fix the leg, Mrs. G became acutely hypotensive as her heart was struggling to pump against a high-pressure blood filled sac. Her organs began to fail from the lack of blood flow. My attending rushed to the bedside with our ultrasound machine to peer inside her body in an attempt to discover the cause of her low blood pressure.

While cardiology was called for an emergent drainage of her pericardium, Mrs. G was intubated to help her breath and started on pressors, a powerful class of medications that artificially keep the blood pressure up to maintain perfusion to her tissues.

For the next two weeks, Mrs. G was part human part machine, as she slowly crept towards recovery. Every few days a new complication arose. A blood clot in her leg requiring anticoagulation. A pooling of blood in her chest compressing her left lung, for which a large plastic chest tube was sneaked between her ribs, ejecting a wine bottle worth of blood so fresh and glistening that it burned an image into my brain.

On day twelve, things were looking up. Her organ function was returning to baseline. The medical team was optimistic, the family guarded but hopeful. That morning on rounds, the nurse uttered four terrifying words: “Her lines are clotting.” Blood clots can be an ominous sign, suggesting she may be going into DIC, a complex clotting state that occurs during extreme illness, morbidly referred to as “death is coming” among the ICU staff. I ordered STAT DIC labs to confirm. They were positive. That evening, a family meeting was held at which point Mrs. G’s family knew the outcome looked grim.

The following day, however, Mrs. G’s blood miraculously did not continue to clot. Her kidney, liver and lung function normalized. With her daughter, husband and sister at the bedside, my attending delivered the prodigious news: “I think she is ready to be extubated.” The family stood up, their eyes wide open and welled with tears. The ventilator was turned off. Mrs. G continued to breath on her own. Slowly, the sedation was weaned and the breathing tube removed from her throat.

In an almost Frankensteinian manner, her comatose body suddenly became alive. The daughter tremulously unfolded a pair of glasses and inched them up the bridge of Mrs. G’s nose. They gazed at each other in disbelief. “Mom! Today is my birthday! I can’t believe this is happening! I’m so happy.” Mrs. G continued to stare at her daughter as they held hands. “I love you,” she whispered in a raspy voice. “I love you. I love you. I love you,” she kept repeating. At that moment of absolute bliss, the awe of Voyager One’s photographic genius was reproduced in a hospital bed, and nothing else mattered in the world.

Illness is the ultimate life-perspective machine, summoning the values and morals in you and your loved ones that really matter, disintegrating the ones that don’t. A mother escaping the brink of death to be with her daughter for another holiday. A significant other that overcomes a cancer diagnosis; those are life’s pale blue dots. Those are the awe-inspiring wide angle shots from billions of miles out that make the truly sacred aspects of life glow. The desire for power and prestige, the name of the hospital you trained at, why those can only be seen when your camera’s lens spirals out of focus.

Larry Istrail is an internal medicine resident.  He is founder, Ancestral Weight Loss Registry and blogs at his self-titled site, Larry Istrail, M.D.

Doctors and nurses need better support when they make errors 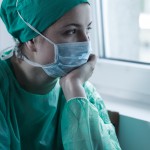 We've killed the way physicians should be 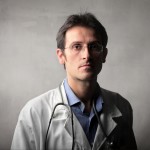