A 21-year-old woman is evaluated for a 3-week history of painful nodules and a rash in the lower extremities, along with pain and swelling of the wrists, knees, and ankles. She reports a low-grade fever and a 2.7-kg (6.0-lb) weight loss since the onset of symptoms. She has taken naproxen with some relief. History is significant for gastroesophageal reflux disease and acne. Medications are over-the-counter famotidine as needed and minocycline.

On physical examination, temperature is 38.2 °C (100.8 °F), blood pressure is 110/60 mm Hg, pulse rate is 92/min, and respiration rate is 16/min. BMI is 24. Mild swelling of the wrists, knees, and ankles is noted. There are scattered 1- to 2-cm painful erythematous nodules as well as livedo reticularis in the lower extremities beginning at the thighs. The remainder of the examination is normal.

Discontinuation of minocycline is indicated for this patient. Minocycline is one of the known causes of drug-induced lupus erythematosus (DILE). Criteria for DILE include a positive antinuclear antibody (ANA) test, exposure to a drug associated with DILE, and at least one clinical feature of lupus in a patient without a known history of lupus. Common symptoms include malaise, fever, arthritis, and rash. Diagnosis is typically confirmed when symptoms resolve several weeks to months after discontinuation of the offending agent. The agents classically associated with DILE, such as procainamide and methyldopa, are not commonly used at present. However, the spectrum of DILE includes other medications that are more commonly used, including hydralazine, diltiazem, isoniazid, minocycline, and certain tumor necrosis factor α inhibitors (such as infliximab and etanercept). Other agents that possibly cause DILE include specific anticonvulsants, antithyroid agents, and certain antibiotics.

The diagnostic laboratory evaluation for DILE is similar to that for patients with suspected idiopathic systemic lupus erythematosus. Antinuclear antibodies are typically positive, whereas anti–double-stranded DNA antibodies are usually negative in DILE, as are most other lupus-associated extractable nuclear autoantibodies. Antihistone antibodies have traditionally been associated with DILE caused by older medications, but their presence may be more variable with DILE induced by newer agents. In addition to causing DILE, certain medications, such as minocycline and hydralazine, may be associated with a p-ANCA syndrome that may also cause a small- to medium-vessel vasculitis with organ involvement. Treatment of DILE, regardless of offending agent, requires discontinuation of the drug. The patient can also be treated symptomatically until manifestations resolve. An NSAID such as naproxen may be helpful, as can low-dose prednisone. Rarely, more substantial therapy may be needed if there is internal organ involvement.

Neither azathioprine nor high-dose prednisone is indicated in this patient because she does not have evidence of internal organ involvement.

Famotidine has not been associated with DILE.

If surgery is a team sport, should surgeons bear sole responsibility for errors? 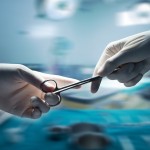 MKSAP: 21-year-old woman with a rash in the lower extremities
1 comments