Transparency in medicine is a good thing

When the Center for Medicare and Medicaid services (CMS) publically disclosed the 2012 CMS reimbursements to physicians, the response was immediately felt throughout the medical community.  As a practicing physician, we were warned of this day.  Can’t say we prepared for it, but we sure did brace for it.

And sure enough, on April 9, 2014, the New York Times published on their website a sortable database where anyone (patients and media outlets alike) can look up their doctor or any doctor nationwide.  Within the next 24 hours, local newspapers published on their front pages the faces of the “highest paid” doctor in their region with some being reimbursed at the level of CEOs of Fortune 500 companies.

As a retina physician, my profession was one of the most reimbursed medical specialties by CMS largely due to our use of high cost, vision-saving, medications.  We’ll touch on that later.

Several months later the Physician Payments Sunshine Act disclosed payments to health care providers and hospitals they receive from industry during 2013.  These relationships with industry may include payments for participation on a speaker panel, advisory board, royalties or stock incentives, or reimbursements for resources used in clinical research.

Physicians weren’t the only entities where the light was shined upon. Some academic hospitals were exposed as to how much more they were charging patients for surgical services and comparing them to less costly outpatient surgery centers where patients may be charged a fraction of the cost for the same procedure.

Transparency in medicine officially made its mark.

Transparency can change physician behavior — often for the better

A recently published survey of family practice physicians showed that when physicians were aware of the exact cost of a prescription medication as well as the cost of a comparable therapeutic equivalent, the physician will more likely select the cheaper of the two medications assuming the safety and efficacy profiles were similar.  That simple act alone could reduce health care costs while improving patient medication compliance at the same time.

OK, so surveys are more theoretical and sometimes don’t necessarily translate to real-world clinical practice.  In my field as a retina specialist, we can treat patients who have a central vision blinding condition known as wet macular degeneration with either one of three different medications:  Avastin, Lucentis, or Eylea.  Lucentis and Eylea have been studied through the rigorous FDA process and were both found to be safe and extremely efficacious as injections directly into the eye to prevent blindness and improve vision.

They also cost ~$2,000 per injection, and patients often require treatment every 4 to 8 weeks indefinitely.  Avastin, which is biochemically similar to Lucentis, works just as effectively, but is compounded and used off-label at a cost of ~$60 per injection.  Most retina specialists use all three drugs at varying frequencies.

However, once CMS pulled the sheets and showed exactly how often we used each of these medications and identified those who were using the higher costing medication the most, doctors began using the less costly Avastin more frequently.

There was a noticeable shift in physician behavior.  It seems like physicians didn’t want to grace the front pages of the local newspaper a second time.

Transparency in medicine can be misleading

The “CMS data dump of 2014” highlighted the total amount of payments physicians were reimbursed by Medicare and Medicaid.  News outlets more often than not interpreted this as how much doctors made as salary through payments from our hard earned tax dollars.

As a retina doctor whose specialty was portrayed as a high-cost outlier, I’d say that nothing could be further from the truth.  The bulk of the CMS payments to retina doctors covered the cost of these medications that we administer to our patients to treat them.  In fact, about 96 percent of the CMS payments for these medications go directly back to the pharmaceutical companies.  The treating physician may charge a 4 percent markup on the medication to cover storage, inventory software and handling of the medication as well as supplies related to the treatment procedure.

The rest goes to big pharma.  Now that wasn’t mentioned in any of the newspaper articles.

Transparency in medicine will only become more transparent. And doctors will need to adapt.

Furthermore, the government won’t stop making more and more physician metrics publically available.  In 2017, through the Affordable Care Act, the government will begin rating all physicians with regards to cost and quality measures through a value-based payment modifier system, and this will be made public for anyone to review.  Cost measures are already being calculated. The quality measures are tabulated by how often doctors comply with reporting “physician quality reporting system (PQRS)” measures.

For example, to satisfy the reporting requirement of these PQRS measures, I would need to address a patient’s blood pressure, counsel smoking cessation, add the patient to our online access patient portal system, and provide them with some pamphlets on diabetes management.  Those who forget to mention smoking at their annual prescription eyeglass refraction may be lumped into the “poor quality” pool.

Missing the PQRS reporting measures will cost you.

As calculated by the value-based payment modifier system, those who are high cost, but forget to send the patient home with some paperwork (low quality of care) may be subject to penalties by CMS upwards of 2 to 4 percent of their total annual Medicare reimbursement.  You have been warned!  On the flip side, become a low-cost physician and hit all of your PQRS marks, you may be rewarded with a bonus of up to 4 percent!  So at least mention to your patients that smoking is bad …

Transparency, when used responsibly, is a good thing.  To reign in the high cost of health care and eventually make doctors better health care providers, transparency is likely a necessary thing.

A rotation in Uganda provides perspective to this medical student

Will your anesthesiologist leave the OR? Patients deserve to know. 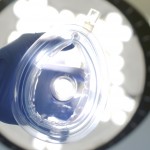 Transparency in medicine can be misleading, but it’s necessary
6 comments