Although we are all very similar, there are genetic differences between us that can affect our health. In different populations, people share different frequencies of certain genes. These gene variants can explain differences in medication responses, incidence of disease, and protection from illness.

For example, warfarin is a widely prescribed medication that is used to prevent clotting and ischemic stroke. The dosing of this medication was previously generic and does not account for differences in different populations. This can be dangerous considering the medication is used to prevent a fatal or debilitating incident. A gene variant known as CYP2C was found to have an effect on dosing in African Americans. Currently, there is a site that has a developed an algorithm that tries to incorporate these differences to improve accurate dosing.

However, there is still an abyss of unknown data regarding medications and disease that is related to genetics. Unfortunately, the majority of the genetic studies being published do not represent a significant proportion of non-European populations. This disparity in medical genetics can have devastating consequences.

The idea of a genetic disparity is not novel. Nature recently published an article by Dr. Esteban Burchard entitled: “Medical research: Missing patients.” In his article, he highlights differences in response to medications in Latinos due to differences in genetic make-up. There is not enough representation from groups other than those of European ancestry in these studies. Therefore, investigators are constantly unable to understand genetic diversity due to lack of statistical power.

In fact, Dr. Burchard states that fewer than 4 percent of genetic association studies have been conducted in people of non-European descent. Some large genetic studies, such as the BabySeq Project, take place in a hospital with low diversity. The BabySeq Project is a study that researchers are conducting to understand our genetic risk profiles. They are sequencing or reading the genes of infants and following them over time to determine how these genes affect health. This study is the first of its kind; and it may become an important aspect of future medicine.

It is ironic that there is a paucity of information related to African American genetics, considering the Human Genome Project used cells from an African American woman named Henrietta Lacks. Her cancer cells, known as HeLa cells, continue to grow 50 years after her death. HeLa cells have allowed for a multitude of genetic studies along with many more discoveries in medicine. It is becoming general knowledge now, but her family did not know about her tremendous contributions to medicine until many years after her death. Henrietta’s family will finally be able to make decisions about how their genetic information is used. Because of this fact, and studies such as the Tuskegee Study, many African Americans are apprehensive about participating in clinical trials. That is why it is important to have representation on the clinical side of the study. Also, it is important to note that there is a federal ethics organization called the institutional review board (IRB) that painstakingly makes sure the Tuskegee Study never happens again.

Currently, there may be a change in sentiment. Dr. Joyce Balls-Berry from the Mayo Clinic conducted a survey at the Links, Incorporated’s 2012 National Assembly. The Links, Incorporated is a national organization of African-American women dedicated to service, mentorship, and leadership. She found that more than one-third of the women surveyed were “extremely willing” to participate in a biobank or genetic study. If more people are aware of genetic studies, perhaps more diverse genetic information can be gathered.

Now that we know there is a genetic disparity, what can we do about it? A great way to boost numbers is for everyone to look up genetic studies in which they can participate.  Some examples of studies that promote diversity are: Lazarex-MGH Cancer Care Equity Program (CCEP), Multi-Ethnic Study of Atherosclerosis (MESA), the Jackson Heart Study, and the Genetics of Asthma in Latino Americans (GALA) study.

Some genetic studies are for anyone, and some trials require people to have a certain disease. I donated my blood sample to Massachusetts General Hospital for their DNA Core facility. My blood sample will be anonymously added to a massive biobank and used for genetic studies. The researchers will have access to my medical record and demographics; however, this information is kept very confidential. Regardless, genetic information is not allowed to be used by insurance companies as a reason to inflate costs. President Obama mandated the Genetic Information Nondiscrimination Act (GINA), which states that no one can be discriminated based on their genetic make-up.

Another way to ensure there is not a great disparity in genetic research is for the NIH to encourage collaboration with hospitals that have a diverse population. Dr. Burchard helped conduct a study enrolling Latino Americans for genetic studies related to asthma. In order to maintain enough representation, the group established collaboration with physicians working in diverse communities in San Francisco, Mexico and Puerto Rico. The group also included bilingual clinical coordinators, religious leaders, and community activists.

President Obama stated in a State of the Union address that his administration is encouraging the use of personalized genetic information to help treat diseases. This requires extensive genetic studies to understand our different responses to medications and our health risks. If we all want to be included in this progress, it helps to be aware that there is a genetic disparity. To help this cause, we can encourage our friends and family to find genetic studies and enroll in them. The goal is to ensure that personalized medicine is not so personal, and will benefit us all. 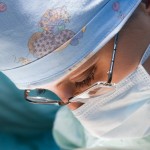 An emergency in public: When should doctors help?