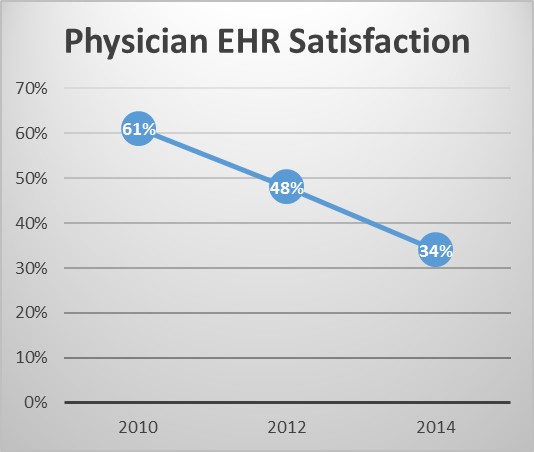 Modern electronic health records (EHRs) have become the norm in U.S. health care — nearly 80 percent of office-based physicians use them, up from 40 percent in 2009, according to federal data. But while adoption is up, satisfaction has plummeted. In 2010, about 61 percent of physicians liked their EHRs (were satisfied or very satisfied, according to periodic AMA surveys). This dropped to 48 percent in 2012, and in 2014 satisfaction rates were only 34%. Physicians have come to loathe their EHR systems.

How do we understand this? What can we do about it? Why, though more ubiquitous, are EHRs so frustrating to rank-and-file physicians? Is it that vendors simply don’t “get it,” or don’t employ physicians to help with product development? Or is it something more fundamental?

Institutions adopt EHRs and push them onto physicians

The dynamic at play here comes from the convergence of two trends in health care delivery. One is the increasing institutionalization of health care, with large systems, hospitals and medical groups dominating local markets. Institutions choose an EHR and then push it out to community physicians (often subsidized or free) in hopes of capturing their loyalty.

Institutions ask EHR vendors to address a whole list of features that are important to the institution. Vendors respond with a one-size-fits-all approach, with many modules to address many of the use cases, which is good for the group, but maybe not so good for each physician. The systems become very complex and expensive, focusing on creating “complete” documentation rather than “fast” documentation. The documentation burden is largely on the physician — input by patients about the current complaint, the history of present illness, and the review of systems is not facilitated, and must be documented by the physician. The need to hire scribes to follow the physician around and do the charting is an entirely fabricated work-need resulting from burdensome EHRs.

The other emerging trend is the shift to value-based care, away from fee-for-service. This makes institutions nervous, since EHRs currently in the market were developed in a fee-for-service environment, and are best suited for that. This new environment involves risk-sharing, measurement of the health status of populations and coordinating care across many settings. New tools are needed, and older EHRs were simply not designed with the value-based landscape in mind. The response by EHR vendors has been to add on additional modules, or interfaces with outside products to build the dashboards needed for population management, risk assessment, predictive modeling, quality metrics, and managing bundled payments. Such bolt-on technology results in a more burdensome system for rank-and-file physicians to use. The result? Plummeting satisfaction with EHRs.

Can this ever change?

Traditionally, EHRs manage the health data they create (or import) internally, within their proprietary systems. The data is institution-centric, and works best within the “walled garden” of the EHR — it is not natively built for sharing. This is true for on-premises enterprise systems as well as for cloud-based EHRs. While it is true that recent regulatory and certification pressures have improved the ability to share some standardized elements of data between different systems (this is very important for care coordination and value-based care, and some EHR vendors have done much work here), the data remains in their institutional silos

This monolithic approach will not fundamentally change so long as the data is locked up within the enterprise system. If anything, there will be continued “system bloat” that will further frustrate physicians. And if an institution chooses to swap out an existing enterprise EHR for another one, it is a huge, arduous process, with dilemmas of data migration being a big barrier to change.

Let’s imagine a different future. Let’s imagine something that is fundamentally, radically changed — as different as a Tesla is from an internal-combustion automobile.

In this new era of health IT, data is de-coupled from within EHRs. Of course, the data is in a HIPAA-compliant safe cloud. But, unlike cloud-based EHR data, this data is patient-centered, universal, and captures the whole story about the patient from all sources. It is built to be universally accessible for input and output. It is a platform, an operating system.

When the data is no longer locked within a given EHR’s system, then the role of the EHR is radically different. There can be dozens, even hundreds of small, lightweight apps that can interact with the shared data, and the value of these apps will be that they serve the unique workflow requirements of specific care settings. Just as there are countless individual settings where health care is delivered, there can be countless apps that make sense for each such setting.

Abandoning a “bad” product due to a bad user interface (UI) and swapping it out for another one is easy, because there is no longer a data migration issue. The data is universal, external, and in the cloud. Just like swapping out apps on one’s cell phone, so long as the data is in the cloud (and not locked locally in your device), changing is not hard, and the decision is based on individual preference.

Let’s say that we build (or have built) the beginnings of such a universal data platform. Let’s say that this platform is able to aggregate data from payers, from EHRs, from patients and their devices. What will become of the established enterprise systems? Likely, institutions will keep them (there is, after all, a huge legacy investment in them). But to address local pain points within an institution, “satellite” apps that interact with the emerging universal data layer will start to be adopted. This trend will grow as the app developer community creates increasingly useful, focused products that do what clinicians need to do, while allowing other apps to do the population management work needed by institutions in a value-based environment.

The future state of EHRs will see a trend where monolithic systems, while continuing to grow and attempt to do new things with old frameworks, will see competition from a new approach, where data is universal and patient-centered, and monolithic EHRs are replaced by a marketplace of smaller, lightweight apps designed to help specific workflows.

This is the way forward out of plummeting satisfaction, and shows a bright but very different-looking future. 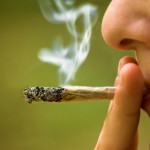 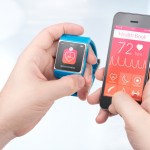 I despise my EHR. But I’m still using it.
3 comments