I’m supposed to speak at the body donor memorial in September. I told the organizers my speech was written. “Don’t worry,” I assured them. “I have it all in my head, just need to get it down on paper. I’m a writer; it’s my process.” But the truth is that I am struggling with what to say. I’ve tried to write it, but I just end up drinking a pot of coffee while the blinking cursor taunts me.

The family members of our donors deserve to hear words that help them feel proud of their loved ones and let them know how grateful we are. And I dream of giving a speech that moves the audience to tears, but I can’t seem to get past my feelings about anatomy lab — most of which do not lend themselves well to a stuffy affair in a packed auditorium.

I dreaded going to lab more than I dread going to the gym — which is really saying something. I feel ashamed and guilty that anatomy lab often filled me with horror, disgust, and fear. These feelings are especially acute because I know that some of my classmates have positive memories about anatomy — feelings of excitement in getting to explore the human body and uncover its inner workings, and I wonder why I don’t feel the same.

During the first weeks of anatomy lab, I had nightmares almost every night. Mostly it was the same dream over and over again. I was the cadaver. Cold and naked on the table, masked faces with readied scalpels standing over me. I tried to scream but couldn’t make a sound. Then I was enveloped in darkness as the clamshell table covers were closed and latched. I woke up covered in sweat. Every night, without fail. The dreams got so bad, in fact, that I started avoiding going to the lab to study altogether, turning instead to my precious books in the comfortable safety of the library.

Naturally, I was terrified the first time I saw my donor’s face — his piercing blue eyes staring into my own. The first time we cut into his flesh I squeezed his hand as we plunged our blades deep into his chest. But of course, he didn’t flinch. I guess that’s the thing about our donors — we can’t hurt them. Truly they are our first and most patient teachers in medical school. Available at any hour, willing to be subjected to the utmost probing; however, these once living souls chose to make the selfless act of willing their earthly remains to our untrained hands. Perhaps I have such a hard time with lab because I could never fathom giving such a gift.

As much as I hated anatomy lab, I was shocked when it seemed to end rather suddenly. Oddly, I felt the need to go back one more time. Sadistic as it was, I told Aaron and Kim (our body donation people) that I would help them clean up and come 9 a.m. on the day before the biochem final, I walked into the lab to find all of the tables open, with all of the bodies exposed. This could have been the start of one of my nightmares, but it was near the holidays, and Kim had Christmas carols playing gently in the background. “Thanks so much for coming,” Aaron says, not looking up from removing a leg from the most musclely cadaver.

Below the tables are body-sized cardboard boxes. Our job is to move the bodies off the table and into the boxes so they can be cremated. I think about running for the door. Looking around the room, I have to say this wasn’t the mitzvah I had in mind.

Kim and I approach the first body — a woman with painted fingernails in a similar shade of pink to my own lacquered fingers. I see the cards and flowers that have been left for her. Someone has taken the time to meticulously piece her back together. Apart from her leg resting a few inches from her pelvis, she looks almost whole. We come to the next table and the next, each with flowers and notes of gratitude. We are careful to lay the bodies gently in the boxes, tucking the flowers and cards in along with them. One of the lab groups visits to say goodbye to their donor in person. I watch as they hold hands and bow their heads in silent farewell.

As Kim and I work, I press her for details about what is going to happen to the bodies. She patiently recounts what I already knew. They will be cremated and the ashes scattered in San Francisco Bay. I know what the cremation process looks like. I saw it in a documentary once. I know that the mass of the ashes will be less than the body’s original mass because the matter has been converted to energy.

I’d like to think some of the energy that was released when they were cremated is in me. My neurons fire when I think of the brachial plexus, or the great vessels. It’s in you too. When you press your stethoscope to a patient’s chest or to your own, it will be their heart you picture in your mind. When you feel for the liver, it shall be theirs you’re reaching for. And when you fall into bed at the end of an excruciating day, you’ll know exactly which muscles, nerves, and sinews ache because you saw them in another.

I named our cadaver Ed. I’m not sure if anyone else in my group called him that, but to me, he was Edward, the 6-foot-something, skinny as a rake man who never met me but illuminated the human body for me in ways no other could. When Kim and I finished putting all of the bodies in the boxes, I snuck back to my table. I had a note in my scrubs pocket for Ed, and I pressed it into his hands.

I went home this weekend for my mom’s birthday. We took the ferry from Tiburon to San Francisco at sunset. It was beautiful. The sun glinted off the water as it slunk below the horizon. Despite having a hard time in the anatomy lab, I feel a certain peace in thinking back on it, and I know I am forever changed — even if I still have the occasional nightmare. I lean over the ferry railing, staring into the depths of the foamy blue-green sea; I think of Ed and think of how his carbon particles have become part of the seaweed and the fishes. There was a Giant’s game in the city that night, and as it got dark, we were treated to a glorious fireworks display I remember what my note to him said:

“Oh, gentle Teacher. I bring you flowers, I carry your body to the funeral pyre. May all of the structures in you that I have named and laid bare, flare. May they burst into light.”
– C. Montross

The day I saw the humanity in medicine

All actors should have to take a CPR class 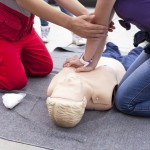