People can wear what they want in America. Whether you want to debut the latest vogue or your midriff rife with adiposity, you are free to do so. But just because you can, doesn’t mean you should. In the span of one week, I found two people — on two separate occasions — wearing white coats, each eliciting a different reaction from me.

In the past few months, I have made a conscientious choice to buy more of my groceries in the form of fruits and vegetables — and less in the form of boxes, cans, containers, and cartons, and you may want to do the same. Although Winn-Dixie may not sit at the pinnacle of grocer quality — like perhaps Whole Foods, it does offer a reasonable produce selection at a reasonable price. As I happened to be picking out nectarines, I glanced up and felt that I was hallucinating. In escaping the hospital, I found it inescapably in front of me: a man in his white coat. In one of those moments where you realize something is wrong but don’t know what, I thought maybe I had not seen him correctly.  Maybe he was a chef and was wearing a white apron? Or maybe I was still in the hospital, and this was normal? Snapping to reality, I realized he was at Winn-Dixie, and I was too. He was wearing a white coat, but I was not. I took out my camera and snapped away.

My first reaction was: What the hell? This is gross. First, I don’t even leave the hospital without washing my hands. This guy brought 20 square feet of a microbiological zoo to buy fried chicken! Maybe he has a really good excuse. Maybe he got fired from the hospital (and couldn’t leave his white coat at the hospital), his car got stolen (so he couldn’t leave the white coat in the car), and was so busy talking on the cell phone that he didn’t realize he could disrobe and fold his white coat for placement in a shopping cart or basket. Maybe he also didn’t realize that he had committed a more heinous oversight: Wearing sandals with his white coat — the coup de grâce. I was apoplectic that more people were not pausing their purchasing activities to gawk at this unfathomable fashion faux pas.

White coats are dirty. In one Israeli study, more than half of physician’s white coats harbored pathogenic bacteria, like Pseudomonas, Acinetobacter, Staphylococcus aureus, Enterobacter — even some with antibiotic resistance. The concern over the transmission of disease had led Britain’s National Health Service to ban doctors wearing white coats in the hospital, and the United Arab Emirates’ Ministry of Health to ban it outside the hospital. Washing your white coat doesn’t help — unless if you’re washing it several times a day. According to the latest white coat research, coats worn just 8 hours after washing have as much contamination as one that is washed “infrequently.” Wearing your white coat for just 3 hours gets you to the 50 percent level of contamination.

No one has shown that doctors wearing white coats outside the hospital increases illness in the general public, but one study showed transfer of multidrug-resistant organism from cloth to pigskin was possible. In theory, transfer from cloth to human skin should also be possible. Whether that translates into morbidity and mortality remains to be seen, but why risk smearing methicillin-resistant Staphylococcus aureus (MRSA) on every surface in Winn-Dixie?

I myself have worn scrubs, albeit begrudgingly, outside of the hospital, but never a white-coat. Doctors, like everyone else, have lives to live and errands to perform. Sometimes, I’ve had to pick up dinner or go to the ATM on the way home. But, I don’t wear my white coat. I’ve never even thought of wearing it out of the hospital, let alone with sandals. To me, it is so unorthodox it rivals opening an umbrella indoors. When I do wear scrubs out, I sometimes take off my scrub top and wear my plain and completely unfashionable T-shirt to minimize any possible bacterial trail and, more importantly, to avoid signaling to the rest of America that I work in a hospital.

The second time it happened, I was again not prepared. I was driving home, listening to the BBC on the radio, when I had reached the tail of a line of cars waiting on a red light. As I waited, I listened to the latest headlines being rattled off. And then I saw it, less than a week’s passing from the first sighting. Again, I thought, It couldn’t be. But it was! A white coat on a person outside of the hospital! I stared at her and wondered, What the hell? Again, I snapped away (see the above picture on the right). Not only are you wearing a white coat outside the hospital, but you are really wearing it outside! In the middle of summer, the heat and humidity in Miami is unbearable. Even if you forgot you were wearing a white coat as you sat in your car and turned on the air conditioner, you would definitely remember wearing it as you opened your car door and the sauna-like environs slapped your face. You would definitely remember you were wearing a white coat as your core temperature rose, your back started to sweat, and your thalamus went into overdrive to keep your body cool.

The only way a person would wear a white coat in such a setting is if they actively chose to do so. There is no excuse as she could have easily laid her white coat down in the back seat or trunk. The most logical explanation for a person to elect to wear a white coat in public is to signal that they are in the health care profession and, more specifically, are a doctor, whether they are or aren’t. White coats are associated with doctors as toque blanches are associated with chefs. One could easily wear a white coat in public to signal to others that they are not just any “Joe” or “Jane.” If being doctor confers special treatment in public, then one could use it for such a purpose. I don’t know if any such promotional sale or treatment by the major gas stations for physicians, but maybe I am wrong. Chefs don’t wear their hats in public. Neither do judges wear their robes in public. Imagine if they did — what a farce! Doctors, and anyone else possessing a white coat, should follow suit and refrain from using the white coat in a personal situation.

White coats are easily removable, unlike scrubs, which is what makes it a point of contention. Even though I consider scrubs being barely socially acceptable, many do not. I am actually not even the first to post about someone wearing a white coat at the gas station. I found a medical student posting about another instance of the exact same situation. In his/her blog, they write that perhaps this white-coat wearer was attempting to signal their perceived lofty status as a doctor. However, any attempt to do so backfires as it more blatantly reveals the “doctor’s” lack of awareness.

The use of the white coat for secondary gain is actually a violation of the medical profession’s ethos. Doctors are doctors to be doctors. The only time it might — barely — be appropriate to wear a white coat out is if one was making a house call. When I was a medical student, one of my family medicine attendings did make house calls — something of a rarity these days — and he didn’t even wear a white coat. If you’re knocking at someone’s house, the tenants already know you are their doctor. Second, doctors are human — just like our patients. Wearing a white coat does not separate us from disease, emotion, or people. Although the white coat signifies our profession, it shouldn’t be used to distance ourselves from those around us — whether we are inside or outside the hospital.

But maybe all of these out-of-place doctors had valid reasons. I don’t know. I am curious to know what you think. Maybe if this keeps up, people will start saying, “You can take him out of the hospital, but you can’t take the hospital out of him.” 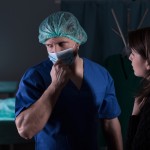 Patients just want their doctors to care. But too many don't.

Doctors shouldn’t wear their white coats in public. But some still do.
15 comments