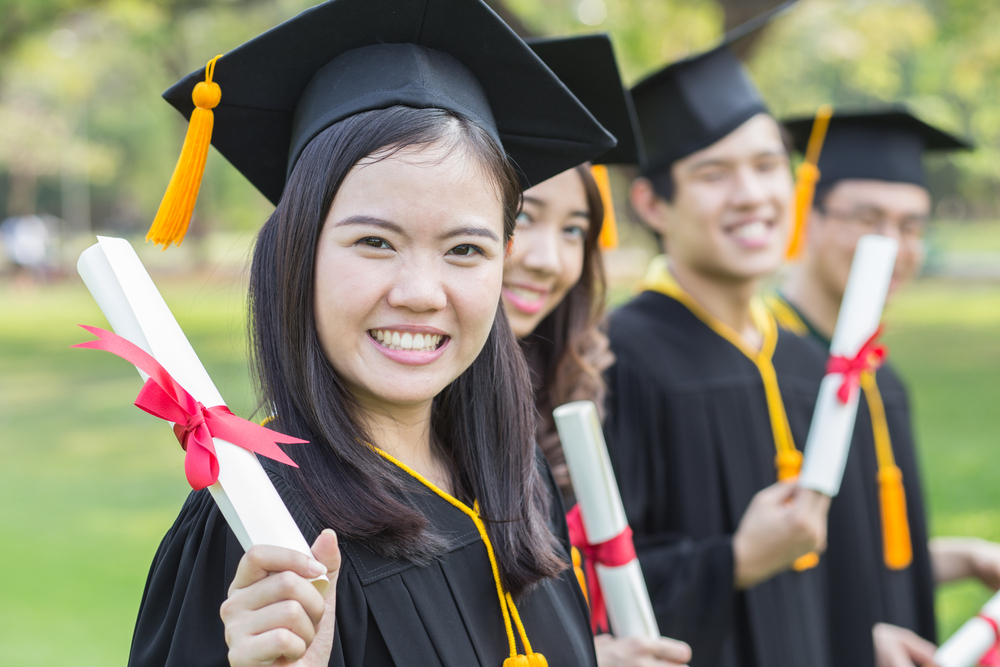 In the news recently has been a complaint filed by over 60 Asian-American groups, alleging discrimination in admissions at Harvard.  They point to such statistics as this: in 2009, among accepted applicants to the Ivy League, the average SAT score on a 1600 point scale for Caucasians was 310 points higher than Hispanics and African-Americans.  Asian-Americans’ average scores were 140 points above Caucasians.  Ivy League schools have long confirmed that they practice affirmative action to boost Hispanic, African-American, and other “under-represented minorities,” which would explain the score gap between Hispanic/African-American applicants and white applicants.  But all have strenuously denied penalizing Asian Americans in any way, which makes the SAT score gap between Asian-American and White applicants awkward to explain.

Such schools fall back on the position of “we admit based on holistic criteria.”  Of course, this exact explanation is what was used in the 1920s at Yale and Harvard to limit the admission of Jews, at a time of sky-rocketing anti-Semitism.  Admissions officers noted an alarming rise of Jewish matriculates into Yale, Harvard, and other bastions.  At the time, admission into such schools was strictly merit-based: Anyone who did well on a fairly difficult exam covering everything from trigonometry to Amazonian geography to Greek grammar could get in.  Immigrant Jews regularly did far better than the white, Anglo-Saxon Protestants (WASPs) who had previously composed a majority of the students.  To stop this:

The admissions office at Harvard became much more interested in the details of an applicant’s personal life. Lowell told his admissions officers to elicit information about the “character” of candidates from “persons who know the applicants well,” and so the letter of reference became mandatory. Harvard started asking applicants to provide a photograph. Candidates had to write personal essays, demonstrating their aptitude for leadership, and list their extracurricular activities.

By 1933, the end of Lowell’s term, the percentage of Jews at Harvard was back down to fifteen percent.

And thus was born the modern university admission system.  Over time, antisemitism waned in this country, and the percentage of Jewish students skyrocketed.  But the same system today, this complaint alleges, is being used to suppress Asian-American enrollment at elite colleges.

Now, it’s important to note here that the system used in much of Asia — strict admissions based on performance on a single national exam — has it’s own problems.  Widespread cheating, incredible stress, and the elimination of extra-curricular activities such as sports, reading, whatever in favor of constant exam prep are the logical results.  And, of course, the system results in production of assembly-line graduates who can recite the laws of thermodynamics but can’t work together to conceive of and design a new jet engine.

And furthermore, evidence of static Asian-American percentages at elite schools relative to a 50 percent population increase and the SAT average score gap do not constitute proof of discrimination.  As Professor Espenshade (the Princeton professor who found the SAT average score gap) explains, teacher recommendations, essays and many other factors play into college admissions — making it hard to claim these SAT averages are a smoking gun.  Added into this are legacy admissions, which serve the university’s purpose of getting as many alumni donations as possible.

In addition, Asian-Americans may be a victim of their own success: As a group, Asian-Americans are the highest earning demographic in the country.  It’s important to note here that “Asian-American” is not a monolithic group — the children of the poor immigrant Chinese single mother working as a waiter in a restaurant and the Hmong or Vietnamese in Texas are hardly advantaged.  But nevertheless, it does suggest that the average Asian-American high school college applicant may have significant advantages over the average Hispanic, African-American, and possibly even white applicant.

That was certainly my case: As the son of an engineer and a physician, with my grandparents living with us to bring me up, I had every advantage in the world.  If I didn’t do very well on my SAT and other exams, I could hardly have expected any understanding or leniency from elite schools.

Affirmative action has a bad connotation these days, but I fully support the underlying principle: Trying to pick based on future performance, not on past achievement.  The Black kid who gets a 1400 on their SAT math and verbal while dodging bullets every day in the South Side of Chicago is probably just as smart as someone like me with a perfect 1600.  And furthermore, that drive to succeed in spite of a total lack of role models, a single parent who is likely working two jobs to stay afloat, and the constant threat of violence is indicative of potential far beyond something like an Eagle Scout award that suburban kids can boast of.  That is what affirmative action really is: appropriately considering achievement in light of circumstances.

All this, combined with the fact that the person organizing the lawsuit (Edward Blum) against Harvard and other Ivy League schools over their admissions policies is an avowed opponent of affirmative action for under-represented minorities, renders the current complaint questionable.

But still: Can the massive SAT score gap between Caucasians and Asians really be explained by just these factors alone?  Are the white applicants to all these elite schools so disadvantaged relative to the average Asian-American applicant, that it justifies an over 100-point difference?  Perhaps not.  In any case, the discovery process will probably be quite interesting.

Now we come to the situation in medical school.  All students applying to medical school must take the MCAT exam, a standardized national test.  The American Association of Medical Colleges (AAMC) to it’s credit tries to be quite open with it’s data.  Briefly googling, one can easily find the table which breaks down accepted students to medical school by race and MCAT scores. 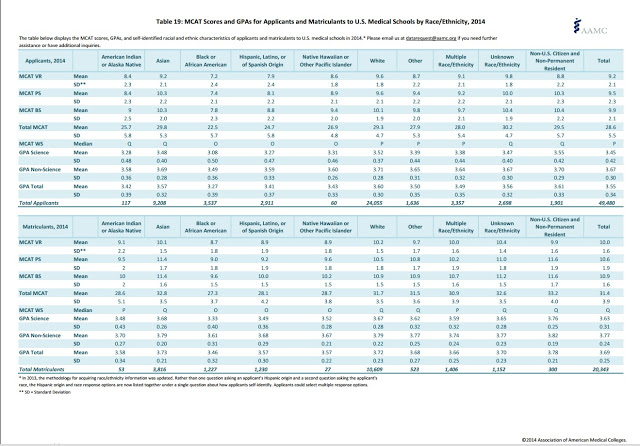 What do we see?  Average scores for Asian applicants who were accepted: 32.8.  Average for White applicants:  31.7.  A full point lower.  Using a chart that looks at MCAT percentiles, this corresponds roughly to being in the 85th vs the 90th percentile of the total number of people who took the exam, give or take.  African-American and Hispanic averages are significantly lower, 27.3 and 28.1, which correspond to percentiles of 62 and 68 or so.

Now, none of this implies that African-American or Hispanic doctors (or white doctors) are worse than Asian ones.  After all, a test score is only one measure of an applicant, and studies have consistently shown little correlation between MCAT scores and skill as a physician.  Of course, MCAT scores do predict some ability to learn and retain some of the vast amount of information in medicine, but the fact is that communication skills and so much of what makes a good doctor can not be measured by any exam.  Not to mention, multiple studies have shown that: 1) physicians sharing the same ethnic background as their patients are more likely to have a better relationship; 2) medical students graduating from schools with diverse student bodies are more likely to rate themselves as ready to care for diverse patients; and 3) under-represented minority physicians are more likely to practice in areas that are medically underserved.

Now, geography may play an even larger role.  Public medical schools, which form a large percentage of the total, like to take students from the schools’ home state.  Their reasoning is that such students are more likely to stick around and practice in the same area.  America’s Asian population is heavily concentrated in a few states: California, New York, and Texas.  The University of South Carolina Medical School is thus unlikely to take many Asian-American students since not many Asian-Americans live in South Carolina.

All this adds up to a reality that if there is any discrimination in medical school admissions, it’s awfully subtle, and what’s more they’re doing a pretty bad job of it — since almost 20 percent of medical students are of Asian origin, relative to an American population of 5.6 percent.  What’s more, a difference of only 1 point on the MCAT between white and Asian applicants is pretty hard to claim as evidence of discrimination.

Ultimately, while undergraduate Ivy League schools may or may not have something to worry about, medical schools’ admission policies seem to be on pretty solid ground. 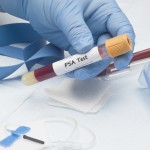 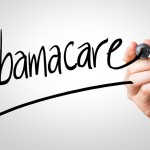