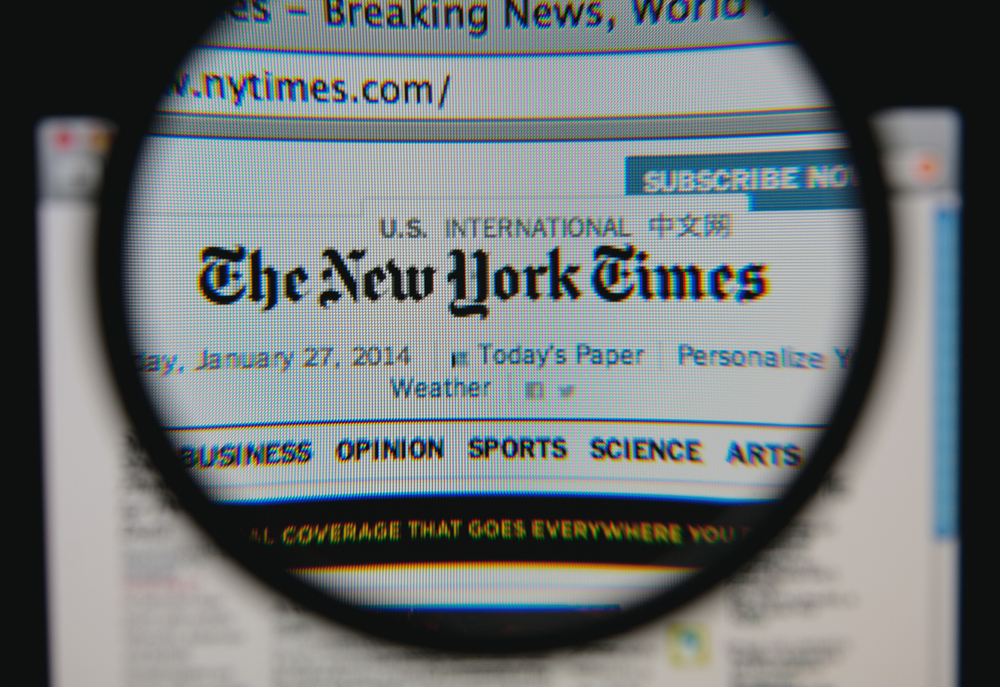 With the flurry of Twitter posts about Maureen Dowd’s article “Stroke of Fate” in the New York Times, it almost seems as if the subject is already stale.

Maureen Dowd is the Pulitzer Prize-winning op-ed columnist for the New York Times who tells a compelling story about a young patient who suffered from a stroke. The patient was healthy triathlete, and she initially attributed the symptoms of her stroke to a migraine headache. Ms. Dowd’s article also touched upon the frustration and fear that patients feel after the diagnosis of a stroke which was an important part of the article. However, somewhere in the middle of the article, Ms. Dowd does a journalistic faceplant that probably had Joseph Pulitzer doing a few backflips in his grave.

Ms. Dowd accompanied the subject of her story — her niece — to Boston in order to be evaluated by a national stroke expert. There they met 78-year-old Dr. Louis Caplan, a Harvard professor of neurology. Dr. Caplan made several inflammatory quotes regarding emergency departments which Ms. Dowd was only too happy to publish. She doesn’t appear to have fact-checked the statements, she doesn’t appear to have asked the professor for the basis behind his statements, nor does she appear to have asked other experts in the field for their comments on the topic.

Of course, Ms. Dowd may argue that her failure to check her sources was an innocent mistake, or that was part of her journalistic expression, but, in either case, she was irresponsible and unethical. She used one of the largest forums in the United States to provide misinformation about emergency medical care. As I read through Dr. Caplan’s quotes and the comments to the article, I can’t help but wonder whether or not Ms. Dowd’s actions were intentional. It doesn’t take much insight to realize that comments from a medical “expert” who denigrated another medical specialty would result in an avalanche of clicks to the New York Times website.

The problem is, Ms. Dowd, your article generated interest not because it was good journalism, but rather because it was hack reporting. You could have used your niece’s misfortune to provide information to your readers about the signs and symptoms of vertebral artery dissection, the treatment, and the outcomes. Instead, you threw your integrity out the window to create just another piece of clickbait. Shame on you.

It isn’t just Ms. Dowd who failed at the New York Times. The New York Times editors failed. Again. Ms. Dowd’s article is eerily similar to a sepsis article written by Jim Dwyer in the New York Times several years ago. Mr. Dwyer told the story of his nephew, Rory Staunton, who, in the midst of influenza season, went to the emergency department with fever and vomiting. Rory received treatment in the emergency department, his symptoms improved, and he was discharged, but he later died from sepsis. Mr. Dwyer went on a crusade against the hospital and the emergency medical providers. In the process, Mr. Dwyer failed to note many of the circumstances regarding Rory’s care, made many inappropriate comments, misapplied sepsis guidelines that were not designed for children, and then tried to hide the fact that those guidelines were not designed for use in children. When called out on his selective reporting of the facts, Mr. Dwyer made excuses such as Rory may have been a child, but he “was the size of an adult.” That episode of drive-by journalism didn’t work so well, either.

So the New York Times editors allowed yet another poorly researched and inflammatory article to be published in their paper. That’s editorial negligence. Shame on each and every one of you, as well.

Then there’s Dr. Caplan. During his interview with Ms. Dowd, Dr. Caplan asserted that all of us “E.R. people … get very little neurology training.” Dr. Caplan also chided “E.R. personnel” for failing to perform enough vascular imaging during suspected strokes, stating that “if a stroke is suspected, a vascular image must be taken as well as a brain image, because it shows up first in the vessels that supply and drain the brain.”

Dr. Caplan then gets creative with his explanation why emergency medical care is “dangerous.” He expresses his fear of “dangerous” “emergency rooms” when patients should instead be going to academic medical center neurologists for their care, then he laments that patients need to “worry about the quality of treatment” once they arrive in the “dangerous” “emergency rooms,” and compares emergency physicians to cud-chewing country bumpkins in “local gas stations” who see a Rolls-Royce roll into their shop, pull off their motor-oil stained baseball caps, scratch their heads with dirty fingernails, spit into a spittoon, and ask each other, “Gee Cleatus, what’s that?”

First of all, it isn’t an “ER.” It is an emergency department. The fact that Dr. Caplan still uses such an outdated term merely demonstrates his ignorance about the specialty of emergency medicine. Despite his obsolete medical lexicon, Dr. Caplan then provided Ms. Dowd with his intimate knowledge of the insufficient quality and quantity of neurology training in emergency medicine residencies throughout the country. Ms. Dowd doesn’t appear to have asked Dr. Caplan if there is any basis for his assertion, but hey, why does Dr. Caplan need to have any basis for his opinions? He is an “expert.” Heck, he even has his own Wikipedia page.

Despite Dr. Caplan’s contentions to the contrary, vascular imaging is standard for patients suspected strokes routinely undergo vascular imaging. Again, Dr. Caplan provides no data to support his contention that the studies are not being routinely performed and Ms. Dowd either didn’t know or didn’t care to ask him for such data. In fact, both brain imaging and vascular studies were performed on Ms. Dowd’s niece, but according to neurology expert Dr. Caplan, they were “misinterpreted” by the non-ivory tower doctors at the ordinary Maryland hospital that initially diagnosed the patient.

Dr. Caplan’s gas station analogy is perhaps the most silly of his comments. Dr. Caplan infers that “local mechanics” are incapable of handling anything but common mechanical problems on common motor vehicles and analogizes emergency physicians as the “local mechanics” of the medical community. How condescending. I have several friends who are “local mechanics,” and I’m pretty sure that each of them has more useful knowledge in their brains than Dr. Caplan. But I get his point. All of us “E.R. people” are glorified triage personnel. If we see anything more than ear infections and sore throats we’re out of our leagues. Even then, we should probably get ENT consults at academic medical centers just to be sure. Because of our tremendous lack of knowledge, we make the emergency department a “dangerous” place.

The knowledge and skills of an average emergency physician would put those of Dr. Caplan to shame. Sure, Dr. Caplan can use some fancy picture cards to check a patient’s memory and can stomp on his ivory pedestal declaring radiologists incompetent in their interpretation of brain scans. But could Dr. Caplan properly use a slit lamp, deliver a baby, properly dose children’s medications, interpret an EKG, reduce a dislocated shoulder, insert a chest tube, resuscitate a coding patient, suture a complex laceration, manage a violent psychiatric patient, or coordinate care for a patient needing emergency surgery? Of course not.

Yet, emergency physicians all over the country routinely perform these tasks … without the help of ophthalmologists, obstetricians, pediatricians, cardiologists, orthopedists, surgeons, intensivists, plastic surgeons, psychiatrists, and administrators. Yeah, emergency physicians diagnose and treat more strokes than Dr. Caplan does, too. Emergency physicians even made the right call on Ms. Dowd’s niece. The article noted that in the emergency “room,” the doctor told Tara that she had suffered a stroke. Her appointment with Dr. Caplan was more than four months after she suffered her stroke. Dang it if those dangerous “E.R. people” don’t get things right once in a while.

Dr. Caplan’s myopic view of medicine has jaded not only his perceptions of emergency departments, but may have influenced the perceptions of people who believe the tripe in Ms. Dowd’s article. I’m thinking it might be in Dr. Caplan’s best interests to have his eyes checked.

Or even his brain.

I hear that Harvard has specialists for that.