The recent Germanwings tragedy has called commercial aviation’s concept of fitness for flight into question.  Although the official mishap investigation has not yet concluded, available information at the time of this writing points to an intentional crashing of the plane by the 27-year-old co-pilot, Andreas Lubitz.

Reports from the co-pilot’s medical records allege he had previously experienced episodes of depression and carried diagnoses for other psychosomatic disorders.  Antidepressants and torn medical memorandums stating that he was not fit for flight were apparently found at the home of Lubitz by investigators.  Despite this, at one of the company’s first press conferences, Lufthansa CEO stated on the record that Andreas Lubitz was “100 percent fit to fly” based on his most recent flight physical in 2014.

This quote and the sensational nature of the story have stirred considerable debate across the globe regarding what this phrase actually means.  By the very nature of their work, much like medical doctors, aircraft pilots are directly responsible for the safety of other human lives.  It is often assumed without question that these professionals are mentally and physically capable of performing their required duties.  Like the Germanwings Airbus 320 aircraft, this previously accepted belief has been left shattered. 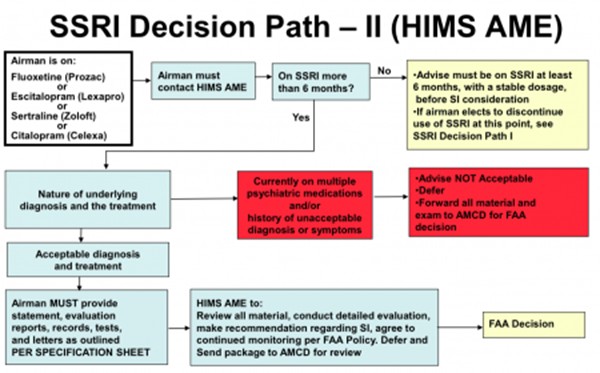 A variety of editorials and articles since the incident communicate a message of outrage and utter perplexity that anyone with a history of mental illness or on antidepressants could possibly be at the controls of an aircraft transporting 100’s of trusting passengers who remain ignorant to their pilot’s mental status.  This is an important question, and current policies need be reviewed and scrutinized.  The U.S. Federal Aviation Administration (FAA) and International Civil Aviation Organization (ICAO) currently have official policies regarding how the flying status of pilots with mental health disorders should be approached.  The FAA’s guide for Aviation Medical Examiners (AMEs) regarding depression and treatment with antidepressants can be reviewed here.  In summary, the FAA allows pilots who demonstrate stability in symptoms while on one antidepressant for at least 6 months to be approved for continued flight duties on a case-by-case basis, which requires special issuance of medical certification.  The decision tree that the FAA has created for their flight docs can be viewed above.

One reactionary response to this incident currently being discussed is to implement a zero tolerance policy towards depression and mental health disorders among pilots.  Although many readers may sympathize with a zero tolerance approach to keeping pilots with mood disorders or antidepressant use out of the cockpit, this is not the most pragmatic approach.  The current system as it stands is logical and preferred.  Here are three reasons why pilots should have an opportunity to remain in the cockpit with a known diagnosis of depression or while taking antidepressants:

The challenge of the aviation medical examiner (AME) or flight surgeon is to use his or her clinical judgment to determine if a pilot is fit for flight.  The first step is acquiring an exhaustive history and performing a thorough physical exam.  Like any physician, this information is then translated into diagnoses.  During the annual flight physical, rather than providing medical treatments for each diagnosis, the flight doc must instead apply the regulating body’s published aeromedical standards (these differ between civil and military organizations and geographically as well).  In cases where a well-defined aeromedical standard does not exist, the flight doc must determine how the medical condition, symptom, or medication would likely affect the aircrew member’s ability to safely and effectively perform their required duties.

In the case of major depression disorder affecting an FAA pilot, an AME can use the aforementioned FAA guidance to determine if a pilot is in fact medically certified for flight (“fit to fly”).  Upon meeting these very specific criteria, the AME must request a special issuance from the appropriate regulating body (in this example, the FAA) to allow the pilot to continue flight duties.  The objective review by a distant regulating body of medical professionals provides the necessary check and balance to the individual physician’s desire to advocate for their patient.  This pragmatic and rational approach allows the physician to make a unique aeromedical disposition on each case, and the pilot will feel more comfortable sharing their mental health struggles with a medical provider.  The solution is to continue to empower the aviation medical professional to make a reasonable aeromedical disposition for the flyer, but then revolutionize the reporting process so that all interested parties can be knowledgeable of the pilot’s condition.

The more concerning issue that this tragedy has uncovered is not whether pilots with mental health disorders should be allowed to fly.  Aircrew will continue to manifest mental illness at a prevalence similar to the general population.  In these cases, the best system is one in which pilots are more likely to share their symptoms with a medical provider.  In turn, effective communication between primary care physicians, flight medicine doctors, regulating agencies, and airlines organizations must exist without interruption or obstacle.  In the case of Andreas Lubitz, the question is whether Lufthansa and the ICAO even knew about his medications and diagnoses. (Editor’s update: They did.) Therefore, the controversy lies more in the current method of reporting that civilian and commercial aviation depends upon to ensure that the pilots guiding millions of passengers across the open skies and jet streams of our globe are in fact medically fit to do so.

Rocky Jedick MD/MBA is a flight surgeon.  He can be reached on Go Flight Medicine and on Twitter @GoFlightMed.

The SGR is dead! Hooray?

Should there be zero tolerance for depression in the cockpit?
16 comments