Outside of a Southern California hospital, an ER doctor is crouched down against a concrete wall grieving the loss of his 19-year-old patient. A paramedic snaps a photo of the tender scene. His coworker, a close friend of the doctor, posts the photo (with permission) online. Minutes after the photograph, the doctor returns to work “holding his head high.”

Thousands of people have commented on the web. In their own words, here is why the photo went viral:

1. Humans crave raw empathy. The photographer captures a poignant moment in a stoic profession that trains doctors to remain professionally distant. The voyeuristic photo reveals the emotional reality of doctoring—and a side of physicians that people don’t usually see — while uniting us all in our common humanity.

When it comes to our work, nothing is harder — and I mean nothing — than telling a loved one that their family member is dead. Give me a bloody airway to intubate. Give me the heroin addict who needed IV access yesterday, but no one can get an IV. Give me the child with anaphylaxis. But don’t give me the unexpected death … We can only do so much, and we can only hope to do our best. But it’s that moment, when you stop resuscitation, and you look around, you look down at your shoes to make sure there’s no blood on them before talking with family, you put your coat back on and you take a deep breath, because you know that you have to tell a family that literally the worst thing imaginable has happened. And it’s in that moment that I feel. And I feel like the guy in this picture.

3. Doctors are not allowed to grieve. A surgeon, TheGreatGator, shares, “We are never formally trained to deal with loss and/or with giving the worst news of a families life to them.” Another doctor, boldwhite, writes:

I know what that person is feeling. Yesterday one of my 17-month-old patients died. I was in the bathroom crying in private between patients several times yesterday. I’ve cried in stairwells and hallways. It eats at you. Life is very fragile and the pain of losing those we are trying to help becomes a scar that doesn’t go away. It has shaped who I am as a person.

4. In medicine, crying is unprofessional. That needs to change — now. A premedical student volunteering in the local ER tells me about a female physician who cried after losing a child. He thought her behavior was unprofessional. I asked him to consider, “Who did she harm by crying?” Meanwhile, a physician tells me she’s been cited for unprofessional conduct for crying at work. Her boss told her, “Unless you are dying, crying is unprofessional behavior and not to be tolerated.” Some physicians and young doctors-in-training are uncomfortable with tears. Grieving is a healthy reaction to sadness. Humans bond through shared pain. Please do not punish your colleagues for their willingness to be vulnerable with grief-stricken families. Real doctors cry.

5. Patients want doctors who cry. Patients are comforted when doctors grieve with them. Vicki Allemand Scott, a mother on Facebook, concurs, “When my daughter passed away the doctors and nurses formed a wall in front of us until she was gone. ALL of these wonderful people were crying just as much as we were. I will never forget the kindness and compassion we were shown by these special people.”

6. Real men cry. Men are socialized not to cry. This photo honors a man for having the courage to cry. A son, livinbandit, shares:

My dad is an ER doctor, and has been for as long as I’ve been alive, always working nights. He doesn’t usually talk about patients, but he would talk about the gross things he’s had to deal with around the dinner table with the family. The times that I do remember though, however rare they were, were the times he would come home, and cry in my mother’s arms because there was someone that he couldn’t save no matter how hard he tried … He didn’t think any of us kids were watching, but I seemed to always see. I’ve never had more respect for my dad then when I would see him cry because he felt like he could have done more … Even if he couldn’t have.

7. More than anything — doctors need your empathy. What happens when the physician in the photo pulls himself together and gets back to work? One commenter on Reddit, PM_YOUR_PANTY_DRAWER, suggests the sad reality:

The part most people fail to realize, is that this man now has to compose himself, walk into another person’s room, and introduce himself with a smile and handshake to the next person. Sometimes healthcare workers walk in to see someone new and before even introducing themselves, out comes; “We’ve been sitting here for 45 minutes and …” or ‘That guy next door has been moaning forever and nobody is helping him.” You literally had to direct yourself 100 percent at someone grappling with death, and the rest of the show goes on around you.

There’s times where you run, and rush, and hurry, and skip eating, and go 12 hours without urinating, and you’d give your firstborn for a cup of water, and through it all, you lose, you get complained to, and you get zero sympathy from your coworkers or management. I’ve been covered in phlegm, urine, feces, blood, infectious drainage, sweat, and tears. I’ve had to go from ensuring a person continues to breathe, to a room full of angry people because grandma wanted a Tylenol and the call light has been on for 10 minutes, and we’re going to another hospital, and we want another doctor, and this place is getting a call to the administration, and I’m going to call a lawyer, and I’m calling Channel 6 news, and we know so-and-so and he’s going to hear about this.

Health care is a life of fighting, defending yourself, sacrificing yourself, working weekends, missing holidays, and sometimes things like losing a patient makes you want to throw up your hands and say, “Fuck it, I’m out.” But you can’t. You do it because you love it. You do this thankless and unappreciated job because you want to. I can’t believe I’m in 6-figure debt and gave up the nights and weekends of my 20s so I could voluntarily do it. But I couldn’t see myself doing anything else.”

One doctor, jimbomac, has a simple request: “Let me tell you those ‘thank-you’ cards probably mean more to us than you think … we do hugely appreciate when people like yourselves take the time to say thanks.”

I had a friend who was consuming heavy amounts of cocaine in the 80s trying to deal with a doctor’s life. He was a Cedars doctor making big bucks and living a prestigious life so I asked him why and he responded with. Paraphrase: I’m an oncologist who thought I would be able to help using the latest cure methods. I find myself head of the ward of incurables and it is my job to ease their pain and watch them die and then watch the response of family members to the outcomes.

9. If you don’t cry, you die. In my recent article, “Physician Bullying: ‘Not Allowed to Cry’,” I discuss unprocessed grief as a root cause of physician bullying, abuse, depression — even suicide. Both men I dated in med school died by suicide. Brilliant physicians. One overdosed at a medical conference. The other overdosed after work. In just over a year, we lost three physicians in my town to suicide. Gunshot wounds, mostly. One local doc lost seven colleagues to suicide — so far. Our profession punishes doctors for grieving and restricts the medical licenses of those seeking mental health care. So rather than process our grief, many docs turn to alcohol, drugs, firearms.

10. The physician in this photo is a modern day hero. 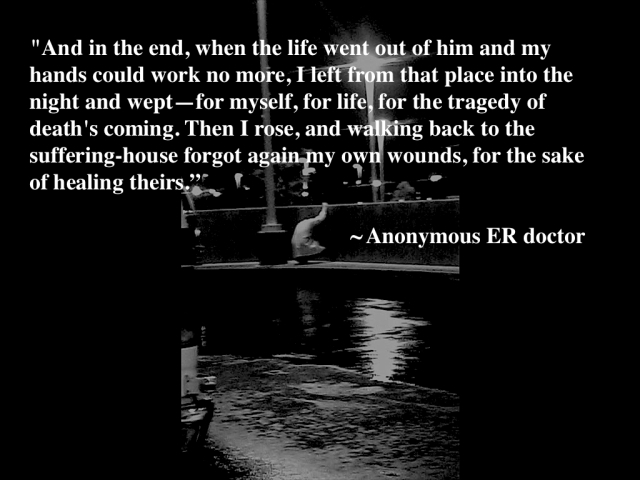 Why you should help your local hospital improve