Nurses are the superheroes of health care 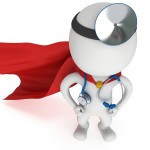