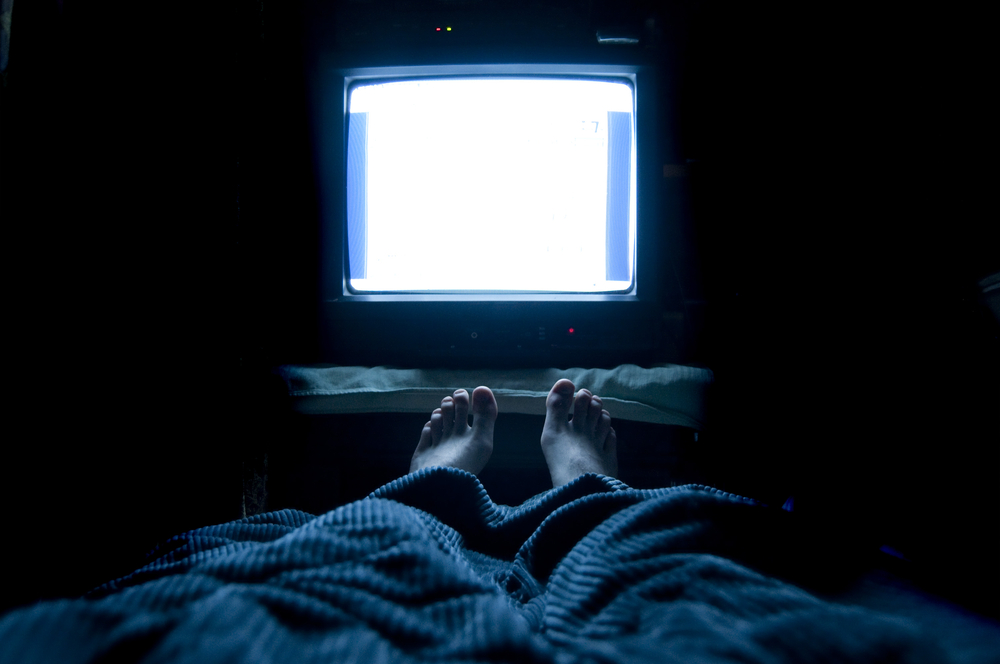 As a sleep physician, I spend a lot of time educating patients about what sleep is and how it works. Sleep, as I often explain, is not simply the lack of being awake; any more than landing a plane is simply the lack of flying. It’s becoming increasingly understood that sleep is an actively generated state, created by a series of neurohormonal changes that work in concert to nudge the brain into the sleep state.

To stretch the plane analogy further, if being asleep were like the plane being on the ground, then falling asleep is like the act of landing the plane. And just like when you land a plane, there are a lot of variables that are involved. There are numerous events that must happen in succession, each affecting and triggering other events that ultimately induce the brain to sleep. A recent study demonstrates just how watching too much television can wreak havoc in this delicate process. Here’s just a few of the ways that television can ruin your sleep.

1. Watching television makes you go to bed later. Television watching has steadily increased in our society, and its migration into our bedrooms marked a time when it began to disrupt our collective sleep and sleep habits. The most obvious effect that this might have is the most simple; we stay up later watching a program that has our attention. This few minutes a night may seem innocent enough. But our brains have a predetermined amount of sleep they need to function well. When we miss that sleep, we build up a “sleep debt” that can make us tired all of the time. Even if we catch up on a bit of sleep the next day, unless that sleep debt is paid back, the brain will still be fatigued.

2. Watching television alters your brain’s bedtime habits. While the sleep state is primarily a biochemical process, the act of falling asleep is very much a learned behavior that goes back to childhood. These learned habits and behaviors of falling asleep are crucially important to helping the brain go to sleep. Like potty training children, we train our brains when and where to fall asleep. These learned behaviors and routines help work in concert with the biochemical processes in our brains to bring us in for a soft landing and help us get a restful night of sleep. For most of our childhood and adult lives, going to bed is associated with sleep; the introduction of television retrains our brain that the bed is just another place to sit or lay down, but not necessarily the place that we are going to initiate sleep.

3. People who watch more television take longer to fall asleep, and wake up earlier. Making us stay up later and altering our bedtime habits may seem like more obvious effects of television. However, its other effects are more insidious, and potentially more damaging to overall health over the long term. It would appear that people who are sedentary and watch more television not only take longer to fall asleep, but they also wake up earlier. How could watching more television do this? The stories and drama that we see on television draw us in, perhaps a bit too much. They can stimulate our nervous system to respond to stress rather than relaxing. This over-stimulation can cause negative effects to sleep quality that may last throughout the sleep cycle.

4. Watching television makes you wake up more often during the night. There’s another way that television can negatively affect sleep. The light emitted by television can be disruptive to sleep, especially light emitted in the blue spectrum. Our brains use light to help guide our sleep/wake cycles. Darkness promotes the production of melatonin, an important chemical involved in the generation of sleep while light suppresses the production of melatonin. The stimulating effect of light tells our brains “go!” at the same time that other mechanisms are saying “stop!”

For me, this study reinforces what I’ve been telling my patients for years. Television is for the living room. Bathrooms are for going potty. It’s time we used our bedrooms for what they were meant for: sleeping.

Television ruins your sleep.  Here are 5 ways how.
2 comments