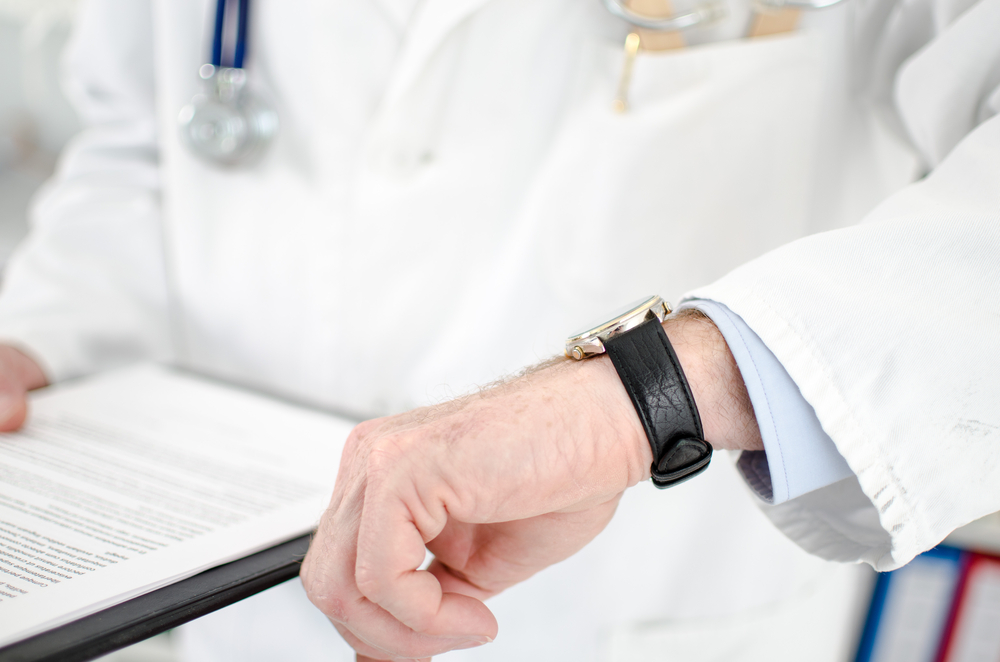 It is in the very words, “running late.” It is not walking late, or strolling late, or even meandering late. It is always running late, the phrase itself active, implying urgency and speed, rush and anxiety. The distress, just like the White Rabbit. The dash to the next appointment in a crammed tight, overfilled schedule.

Running late. It is the bane of doctors everywhere. I can’t stand it; I don’t think any doctor is happy when it happens. It is distressing and feels unavoidable. I feel as if I can’t stop it, can’t prevent it.

It is almost to the point that I am amazed if I am ever actually on time. Office schedules overbooked to compensate for no-shows and to accommodate urgent patients, and operations are scheduled with an optimistic slant on the time needed. All of it collapsing with the first surprise, the extra problem, the emergency. The schedule so carefully crafted, like a house of cards, and just as vulnerable to come crashing down at the slightest perturbation, the tiniest shift. These shifts and adjustments snowball throughout the rest of the day, bigger and bigger, later and later, sweeping me along the avalanche path.

Run, run, run. Rush, rush, rush. Office to hospital, hospital to office. Dashing around the hospital on patient rounds, dashing between rooms in the clinic schedule. When I am late, no time to eat, no time to pee. The later I get, the more things slow me down — the family at the bedside, the nurse with questions, the colleague discussing the consult, phone ringing and pager beeping, piling on, assaulting you from all sides. Each of them dealt with, deflecting and dispensing with each issue and query, an eye on the clock, the schedule in mind, moving forward, keeping it moving. The constant refrain in the back of my head, “I’m late!” at once chastising and exhorting, speeding me on.

I make it to the door and burst in.

In the examination room, and especially in the operating room, it is a different space, different pace. The clock stops. I muster my wits, and I focus my full attention on the patient before me. I suppress the looming schedule, the urgency of the clock; they do not enter the room with me. All of the time in the world, all of the time they have been patiently — or impatiently — waiting for. Time to listen to their history, to examine, to perform a procedure or operation. Stifling the awareness that time is snowballing in that infernal schedule as I take the time for the patient. Time for the plot twists and surprises that are revealed when you allow time, when you take time.

The operating room is the most protected sanctuary from the schedule, the clock, the outside world. It is true that in operating, speed is prized*, harkening back to the days before reliable and safe anesthesia. But precision is also valued. So there is a balance between the two, a dance with no wasted steps, each movement efficient yet accurate, thus combining speed and precision. Steps and movements that are adjusted to the pathology, the anatomy, even the complications as the dance moves on. The steps and the rhythms and the movements change, as you guide the dance, the operation, to its close. In this dance, this operation, I take all the time I need but not a moment more.

Each patient gets the time needed for a consultation, for an examination, for an operation. As the wise philosopher of the 20th century, Yogi Berra said, “It ain’t over until it’s over.”

Then, after, I step out of the room, I pause for a brief moment and take a breath, and then step back into the fray, once more into the breach.

*Footnote:  Speed was a principal way upon which surgeons were judged historically, and they were timed with stopwatches. Among surgeons praised for their skill and speed, Dr. Robert Liston has been entitled the fastest surgeon, practicing in the 19th century, a time when speed was vitally important and critical to patient survival. His cases were legendary, his fastest being an amputation taking 25 seconds (presumably not including the closure or dressing of the wound).  From Wikipedia — Liston’s most famous case:  Amputated the leg in under 2 1/2 minutes (the patient died afterwards in the ward from hospital gangrene; they usually did in those pre-Listerian days). He amputated, in addition, the fingers of his young assistant (who died afterwards in the ward from hospital gangrene). He also slashed through the coat tails of a distinguished surgical spectator, who was so terrified that the knife had pierced his vitals he dropped dead from fright. That was the only operation in history with a 300 percent mortality. And his second most famous case:  Amputated the leg in 2 1⁄2 minutes, but in his enthusiasm the patient’s testicles as well.

Anesthesia has afforded a more leisurely pace for surgery and operations, permitting precision and meticulousness, as well as operating just on the patient and not the assistants or bystanders.

Thus, in the midst of an operation, the operating room is now largely free from the pressures of the clock and the schedule, though even there that sanctuary is often violated.

Running late: The bane of every doctor
1 comments