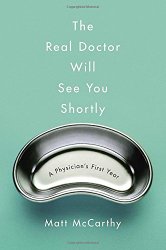 An excerpt from The Real Doctor Will See You Shortly.  Warning: Contains explicit language.

It started with a banana peel.

After years of quiet study in the libraries, laboratories, and lecture halls of Harvard Medical School, I finally made the tectonic shift to hospital life in the summer of 2006. The third year of medical school marks a startling departure from the academic fantasia of study groups and pass/fail exams, and I was flooded with anxiety. I valued sleep. I wasn’t sure how I’d handle destructive criticism, and I was known to have an irritable bowel.

The first assignment in my rotation was surgery, a three-month slog of 120-hour workweeks at Massachusetts General Hospital that was designed to identify the handful of future surgeons in our class of roughly 165 students. On the first day, I was assigned to a team with a desiccated fifth-year surgical resident named Axel, who had piercing periwinkle eyes and an implausible Adam’s apple that caused my eyes to bounce when he spoke. Axel could fairly be described as a member of the Undead; he had traded the better part of his youth for world-class surgical training and wasn’t sure it had been a fair swap.

Shortly after I was introduced to him in the cafeteria, Axel held up a banana peel, tore it in half, and said, “You may not lay a hand on any of my patients until you’ve sutured this back together.” He reached in his back pocket, handed me a needle and thread, and banished me from sight. “Go wherever you want to figure it out,” he said, “and please stop grinding your teeth.”

At first I didn’t know what to do; surely none of the other medical students had been given this assignment, and I didn’t know my way around the place we called Man’s Greatest Hospital well enough to find someone who could help. I cradled the peel like a wounded bird and started wandering up and down the long corridors, peeking into rooms at random. Eventually I returned to the room where I’d started the day — the surgical library — where an administrative assistant had given a dozen of us folders with an outline of expectations. There had been no mention of banana peels.

As I scanned the room, which was dotted with portraits of men I should have recognized but didn’t, I recalled something a frustrated professor had recently said to me: “When a patient is having a heart attack, a Harvard student’s instinct is to sprint not to the patient’s bed­side but rather to the library, to read more about the nature of chest pain. Don’t ever do that.” Yet here I was, surrounded by books instead of patients.

I pulled one off the shelf and flipped through the pages. What were my classmates doing right now? Learning to scrub in? Assisting with appendectomies? Removing gallbladders? That’s what I’d thought this rotation would be about: actual surgery, not fumbling with fruit. Was all of that really on hold until I figured this out? I looked down at the banana peel and sighed.

I could probably patch the thing back together with some basic shoestring knots, but that wasn’t the task. Suturing involves a specific set of techniques to make knots that leave very little trace of their ex­istence, as would be necessary on a patient who required them to close up a wound. But the instructions I found in books weren’t helping. The pages were filled with detailed descriptions of arcane anatomical structures and artists’ renderings of complex intestinal surgeries, stuff that was far too advanced for me.

Based on my incipient attempts, the banana peel would have been grounds for a malpractice suit. An olio of solutions bounced through my head: Pay a frazzled surgical intern to show me how to suture? Super­glue the peel back together? Claim I’d used dissolving stitches?

I heard a knock at the door and closed the book. A voice outside the library called, “Hey, a little help?”

I opened the door and found looking up at me a man with a reced­ing hairline and wire-rimmed glasses seated in a wheelchair.

“Hello,” I said, as though receiving an uninvited dinner guest. A lost patient, I presumed, until the man wheeled himself past me into the room and flipped on a second set of lights. “I’m Charlie,” he said. “You must be …”

“Matt. One of the new medical students.”

His face brightened, and he took off the glasses. “Charlie McCabe,” he said. “Pleasure to meet you.”

I flinched when I heard the name. McCabe had been one of the most promising surgeons of his generation when he began his residency at Mass General in the 1970s. At the end of his training, he was accepted into the cardiothoracic subspecialty training program at MGH, but just before graduation, he developed a tingling in his hands. In short measure he was diagnosed with multiple sclerosis and was left unable to operate. After the diagnosis, McCabe began teaching surgery to medical students and now ran the surgical rotation at Mass General. He had been named the Harvard Medical School teacher of the year on several occasions, and we all knew his heartbreaking biography.

“You’re a few minutes early,” he said. “I was about to have you guys paged. We’re going to go over some of the basics of the rotation.”

As I sat down I looked for a place to put the peel.

“Need a trash can?” McCabe asked, motioning with his head toward the large receptacle in the corner.

“Axel and his banana peels.” McCabe’s head shook from side to side.

For the next three days, I reported to the surgical library at 6:00 a.m. to spend hour upon frustrating hour mutilating the ever-darkening, softening banana peel. At the end of the third day, I bumped into McCabe near the hospital’s entrance.

“Success?” he asked. I held up the tattered peel, and he winced and said, “To my office.”

When we got to his office, I took a seat and he handed me a suture kit that he kept on his desk. “Technique is crucial,” he said. “Are you right-handed or left?”

The last time I’d been called that was on a baseball diamond, when life had seemed to be pulling me in a very different direction. Before I met McCabe, I’d spent four years on the Yale baseball team, day­dreaming of life as a professional athlete. A week after graduation, I was drafted in the twenty-first round of the 2002 Major League Base­ball draft by the Anaheim Angels and joined a minor-league team in Provo, Utah.

It quickly became apparent, however, that our hero was not des­tined for a career in pro ball. And it was during that soul-searching summer in the minors that I acknowledged something my sister had said during our childhood in Florida: I was one of the very few athletes who just didn’t look good in a baseball cap. So as my brief but memo­rable stint in rookie ball drew to a close, I applied to medical school. Harvard accepted me the same month I was cut by the Angels.

McCabe’s hands shook as he positioned mine above the banana peel and approximated its edges. The sensation made me shiver, which I tried not to show; he seemed as delicate as the peel. But despite the shaking he moved with remarkable certainty. His confidence and ex­pertise were undiminished, and I could imagine in that moment how good he must’ve been. “Don’t take too big of a bite,” McCabe said, referring to the depth of the needle insertion. “But be confident, be assertive.”

I made a swipe, and he shook his head. “Not bad. Not good. Again.” I retracted the needle and considered my next path. “You’re thinking,” he said. “Don’t think. Do.” I took another swipe, and the peel cinched together. “Perfect.” I was briefly reminded of the pottery-throwing scene from Ghost. What felt clumsy at first quickly became comfortable. The peel was sutured up in minutes. “You’re a natural,” he said. “I think we might have a budding surgeon on our hands.”

The compliment stilled my roiling stomach. To have picked up something so quickly gave me a hint of the confidence I’d felt in base­ball, before I peaked short of the big leagues and suddenly started hear­ing from coaches and trainers that I didn’t quite have what it took. Granted, I had a long way to go in medical school, but this sort of stroking coming from someone like McCabe opened up a window on a possible future.

I admired the dank, battered peel and presented it to Axel the next morning over a predawn breakfast. “Very nice,” he said, daintily hold­ing the peel over his plate of pancakes. “You’re almost ready for the show.”

As I took in the compliment, I thought about the operating room and “the show.” I imagined myself extracting a bullet from a victim of senseless violence and calmly suturing up the wound.

“Let’s lay some ground rules.” Axel mumbled while devouring his food. “One, you should always be the first one scrubbed in. Two, do not speak unless spoken to. Three, wear a clean pair of scrubs every day and keep a shirt and tie in your locker for the days when we have clinic.”

“Got it.” I started to write TIE on my hand.

“Please do not write on your hands.”

We got up from our pancakes, and when Axel discarded his tray and the beat‑up banana peel, I realized with a twinge of sadness that I’d grown somewhat fond of it. As we headed toward the operating room, he put his right hand on my left shoulder and stopped me. He was tall but wiry, not imposing.

“Going to give you some words of wisdom,” he said, “that were passed down to me when I became a surgeon. Consider them a sur­geon’s survival guide.” I closed my eyes briefly, indicating I was ready to absorb. “When you can eat, eat. When you can sleep, sleep. When you can fuck, fuck. But do not fuck with the pancreas.”

Matt McCarthy is an internal medicine physician and author of The Real Doctor Will See You Shortly.

The siloes of academic medical centers