If it weren’t for the coming together of people from all over the globe, the influenza pandemic of 1918, also known as the Spanish Flu, would not have had the devastating effect that it did. It is estimated that at one point this deadly strain infected one out of every five people on earth and ended up claiming the lives of approximately fifty million people (in comparison, nine million combatants and seven million civilians died during the First World War).

But viruses weren’t the only infectious enemy during these war-torn years. Bacterial infection from battle wounds claimed the lives and limbs of thousands. So did bacterial dysentery, in particular, Shigella. According to The Lancet, the cause of Shigellosis among soldiers during the Great War was thought to be the result of poor hygiene and insufficient drainage of excrement in the trenches, forcing “soldiers … to survive, often knee deep or worse, in foul water.”

Enter Felix d’Herelle, an oft-forgotten medical hero of the twentieth century. D’Herelle was a self-taught French-Canadian scientist who serendipitously discovered that bacteria-fighting viruses, later referred to as bacteriophages, exist and that some of them are present in humans to combat disease.

According to Carl Zimmer in A Planet of Viruses, d’Herelle made this breakthrough while studying an outbreak of Shigellosis among French soldiers. As part of his investigations, he ran the diarrhea of the sick soldiers through a filter and then grew the isolated bacteria in culture. To his surprise, some of the bacteria in culture spontaneously died. When he isolated these regions on the culture media and exposed a different set of colonies of Shigella to the isolated fluid, the bacteria once again died.

Just like Semmelweiss’ theory regarding hand washing and the prevention of infection years earlier, d’Herelle’s discovery was met with outrage and skepticism. The idea of a bacteria-killing virus in humans was ridiculed by the established medical elite, including the Nobel Prize winning French immunologist, Jules Bordet, who went so far as to claim that d’Herelle had lied about his experiments.

To prove to the scientific community once and for all that his experiments were accurate, d’Herelle isolated the phages from the stools of soldiers who had recovered from Shigella and fed them to soldiers suffering from dysentery, after first swallowing some of the medium himself to ensure that he wouldn’t hurt his patients. The sick patients quickly recovered, and d’Herelle went on to cure people with cholera and the bubonic plague. After years of fighting off criticism, d’Herelle was eventually awarded much-deserved fortune and fame (the novel Arrowsmith by Sinclair Lewis is loosely based on d’Herelle’s life).

D’Herelle’s discovery of bacteriophages has huge clinical implications. Using live viruses to deliver medical treatment (i.e., by providing aid in fighting off bacterial infections through gene therapy) has already been proven to be effective in multiple scientific trials. And yet, people worry about the potential harm. Many critics state that introducing foreign viruses in humans can have deleterious effects to those individuals and may even cause a worldwide, man-made pandemic, much like the Spanish Flu of 1918.

Bacteriophage proponents, though, assert that the theoretical risk of harm in using this technology to cure disease is low compared to the potential gains. According to Carl Zimmer, bacteriophages are ubiquitous: “Our bodies are packed with phages … which is not surprising when you consider that we each carry about a hundred trillion bacteria — promising hosts for various species of phages.” They’re present in many of the foods we eat (e.g., salami, yogurt, pickles). Bacteriophages can be engineered to target specific bacteria, just as bacteriologists James Collins out of Boston University and Tim Lu out of MIT did in 2008. They developed a bacteriophage that targeted the bacteria E. coli; in particular, Collins and Lu used gene therapy to target E. coli’s ability to create a biofilm — a thin and slimy substance used by some bacteria to attach to surfaces, as well as to protect themselves against harm from antibiotics and the immune system. The phages they engineered were greater than 99 percent effective in killing the E. coli they targeted.

Despite these successes, there are hurdles to the use of this technology, including public support. Our current debate over vaccinations, and the difficulty in convincing parents to agree to vaccinate their children, suggests that it would be equally difficult to get the general public to support the use of bacteriophages to cure disease.

Regardless of this debate, it is reassuring that there are still heroes out there doing the unthinkable to advance our medical knowledge. The latest researcher to do something as daring as d’Herelle is Barry Marshall, an Australian internist who, to prove to the world and the medical elite that the bacteria Helicobacter pylori causes stomach ulcers, drank a Petri dish full of this bacteria and subsequently developed gastritis. 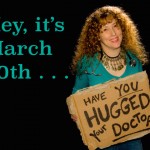 Older physicians should write. Here's why.