The headlines from January 7th and 8th told an increasingly serious story about America’s vaccine civil war — a story that was to explode in the weeks ahead. We’ve come to expect that kind of story to be uncovered by a major news network with expertly trained, experienced reporters. And it was, of course. But it wasn’t a reporter who broke the story about the connection between Disneyland and the measles. It was a pediatrician. A tweeting pediatrician from San Diego — where some of the first related measles cases were seen.

Jaime Friedman, MD is a pediatrician with Children’s Primary Care in San Diego, California. On January 6, she received an alert from the San Diego Department of Health — a standard operating procedure, apparently — that the recently treated measles cases in San Diego were linked to a specific range of dates and a specific place: Disneyland. As a public health-minded physician, Dr. Friedman knew that she needed to share the information right away. She turned to the most immediate form of communication around – one that doctors, patients, and the media have adopted in significant numbers – Twitter.

If you went to Disneyland 12/17-12/20 there were 7 confirmed cases of measles you could have been exposed to. 2 unvax kids from San Diego

Because online doctors tend to be highly connected to one another, it’s not particularly surprising that 5 of the first 10 people to note Disneyland’s connection to the measles outbreak were doctors, all of whom were retweeting Dr. Friedman’s original tweet (it was retweeted 11 times overall as of this writing). What is a bit surprising is that there was no media activity until after the California Department of Public Health issued its formal statement on January 7 — over 15 hours after Dr. Friedman’s tweet. Jennifer Thang, an assignment editor at KTLA5 TV and Susan Abram, a health care and public health reporter at the L.A. Daily News, tweeted about the story at that point, kicking off what would turn out to be more than 176,000 tweets, 5,200 blog posts and 22,000 news stories over the next 4 weeks (source: Sysomos data 1/7 – 2/15).

The phenomenon we saw playing out here is becoming increasingly common. As more and more doctors are establishing online identities and audiences, they have become primary sources for the reporters that cover the health care space. In fact, Dr. Friedman’s tweet led to an interview with Liz Szabo of USA Today for her January 23 piece entitled “Measles outbreak raises question of vaccine exemptions.” While none of the five doctors who were early reporters of the news have achieved celebrity status, they’re followed by 27 unique reporters and media outlets as well as 475 other physicians. And Ms. Szabo happens to follow all five of them. In fact, in an analysis of Ms. Szabo’s twitter account, she follows 1,541 doctors around the world, and in return is followed by over 1,900.

This interplay between doctors and the media has become more and more pronounced over time. In an analysis of doctors and the media tweeting about vaccinations, the doctors have been clear leaders for the past year. However, a few recent events have clearly shaken up the status quo, bringing the media very much into the conversation that doctors began long ago. 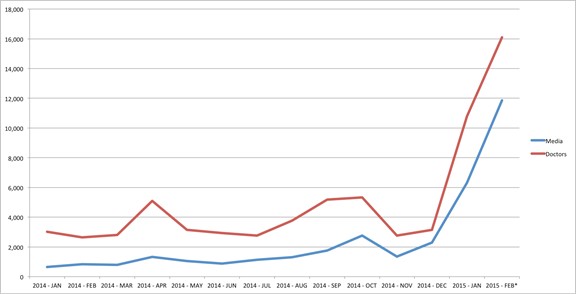 For 2014, doctors tweets about vaccines and common childhood diseases (e.g., measles) outnumbered those of the media by nearly 3:1. However, with the break of the Disneyland story, the media began to redress that balance. January’s count saw physicians’ tweets outpacing those of the media contingent by a ratio of only 1.7:1. And on February 2nd and 3rd, the media outpaced the doctors for the first and only days ever — thanks for the most part to Chris Christie and Rand Paul, two GOP presidential hopefuls who chose that day to speak out on vaccines. 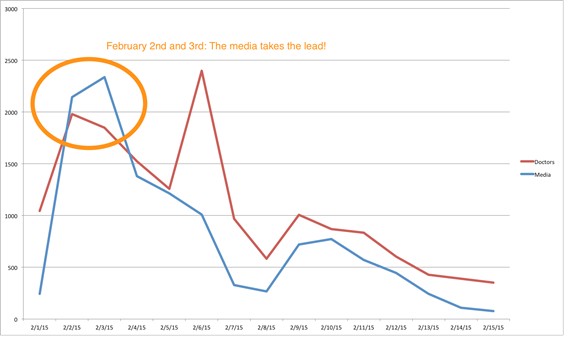 First, from Christie, in his remarks after touring a vaccine plant in England:

Christie said that he and his wife had vaccinated their children, describing that decision as “the best expression I can give you of my opinion.” He said they believe doing so is an “important part of making sure we protect their health and the public health.”

“But,” Christie added, “I also understand that parents need to have some measure of choice in things as well. So that’s the balance that the government has to decide.”
– Christie: Parents should have choice in vaccinations (Associated Press, February 2, 2015)

Paul was even more controversial:

Republican Sen. Rand Paul is standing by his statement that most vaccinations should be “voluntary,” telling CNBC that a parent’s choice not to vaccinate a child is “an issue of freedom.”

In an interview with the network Monday, Paul said that vaccines are “a good thing” but that parents “should have some input” into whether or not their children must get them.

And he gave credence to the idea – disputed by the majority of the scientific community – that vaccination can lead to mental disabilities.

“I have heard of many tragic cases of walking, talking normal children who wound up with profound mental disorders after vaccines,” he said.
– Rand Paul: Vaccines Can Lead to ‘Mental Disorders’ (NBC News, February 2, 2015)

These statements naturally received tremendous press coverage. In addition to the fact that the media had finally outpaced the doctors in terms of their vaccine conversations, there was another interesting element that came to the fore as a part of this analysis; it’s not only the quantity of the conversation that’s important here; it’s also the nature of that conversation.

In performing a content gap analysis on the two data sets (doctors vs. media in vaccine-related conversations), it became immediately clear that the media largely “played it straight” with regard to reporting the news about Christie and Paul – and that the doctors were not happy about it. The most important phrase in the doctors’ conversations related to the “false balance” that had been embraced by the media.

.@gorskon Call it like it is: false balance on vaccines is clickbait. Science journalists know the facts but pass on crap to get clicks.

What they mean by that is that sometimes “balanced” coverage isn’t actually appropriate. In a case where scientific fact overwhelms illogical superstition to an overwhelming degree, presenting “balanced” coverage is actually giving far more credence to the superstition than it deserves — something akin to the media hosting an open “debate” between a scientist explaining that the earth revolves around the sun, and a traveling salesman who was convinced that the reverse was true. And while it’s true that the anti-vaccine voice is still loud, I have a feeling that the media will come around to the doctors’ point of view without much delay. Now that the doctors are online – effectively members of the media themselves – it’s awfully hard to ignore the fact that nobody in the world is positioned as well as they are to share good, scientifically-based health information to the public.

Thanks are due to Dr. Friedman and the tens of thousands of other doctors who have made it their business to ensure that the public has access to the wisdom and insight of real doctors when they’re searching online for health information.

Greg Matthews is managing director, The W2O Group’s MDigitalLife team. He is also the author of Missing the forest for the trees: The change in physician roles that the healthcare industry missed.

2015’s biggest health story was broken by a doctor, not a reporter
1 comments