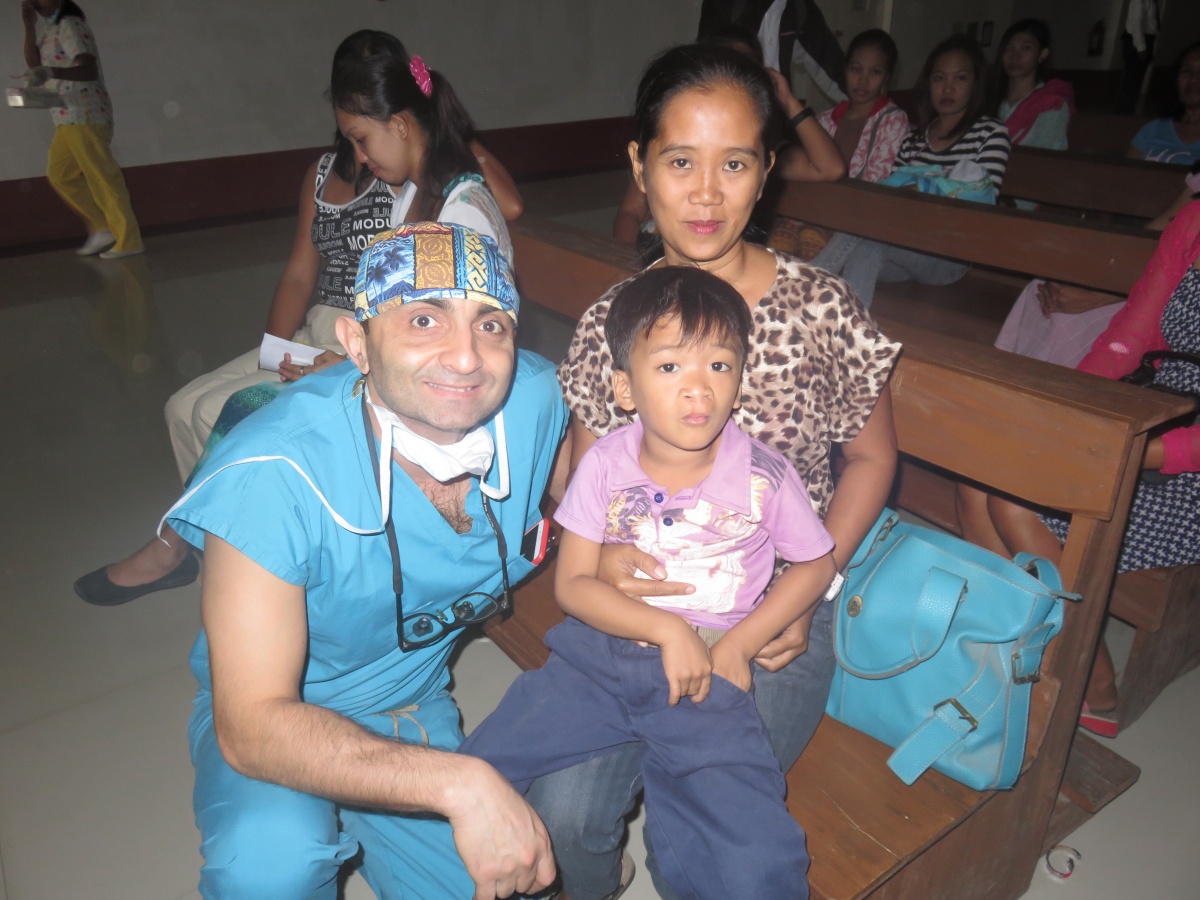 In 2012, in a remote town of San Jose, on the southern part of Occidental Mindoro province in the Philippines, I met a little boy and his desperate, but courageous mother.  The boy was just a few months past his first birthday.  He was born with a facial congenital defect known as bilateral cleft lip, so commonly seen in this part of the world.  I, a plastic surgeon from New Jersey, was born to meet him and correct his congenital facial defect.  What I could not have imagined was how this meeting would affect both our lives.

Bilateral cleft of the upper lip is one of the most disfiguring congenital birth defects.  This occurs when the medial part of the face fails to fuse in the midline during intrauterine development of the child.  There are all sorts of variations and degrees of severity of this process, but the bilateral variety is the most disfiguring.  It is heart wrenching for a child to be born with a cleft deformity.   It impacts not only the child, but it is devastating for the parents.   As a fellow parent, I cannot begin to imagine what that must feel like.

Back in 2012, I was part of a medical team, Destination Hope, a charitable organization started by my dear colleague and humanitarian Scott Mosser, MD.  We were here to perform surgery to correct cleft lips and palates.  An entire medical team dedicated to helping those, who could not get this life altering surgery.  This is how I met this family and my patient.  He was one of scores of other patients with cleft lips and palates that we came to repair.  There was nothing remarkable or unusual about him.

The surgery of this child was no different than the countless others that we have performed for many years on these missions.  I repaired the cleft lip and restored the anatomy using the most standard technique.  There was nothing unusual in the immediate recovery process of this child.  He was one of my last cases of a long week.  We were leaving the Philippines heading home the very next day.

It was not until the next morning rounds, our last day of the mission, that we realized there was something terribly wrong with this little patient.  He was not responding as he should have been.  He was almost unconscious.  Did he have a seizure?  I could see anxious family members and a desperate mother pray, as they watched our team go through our medical drills to diagnose the problem.  As his surgeon, I did my best to reassure his mother that her son was going to be fine.  As a fellow parent, I was not so sure.

Unable to resolve this issue in the local remote setting, we engaged the local staff including the governor of the province to mobilize a medivac.  The child was airlifted to a large university hospital system in Manila.  After an exhaustive diagnostic process that took over two weeks and long after our team had left the Philippines, a miracle happened.  Sitting in my office in New Jersey one day, I got word that he made a miraculous recovery and was sent home in stable condition.  I was never really sure what stable meant, but I was happy to know he recovered and went home.

Since that mission, Dr. Mosser and I have often thought about this child.  He was the only child that I operated on that had a potentially life-threatening complication.  Still to this day, I have not been able to figure out what actually happened to him that fateful day.  I have often wondered how he made out.  Is he normal?  Has the surgery improved his life or is he worse off?  How did this episode impact his mother, who seemed so desperate and yet courageous?  What feelings would she harbor towards me as the surgeon?

Three years later, in a rare twist of fate, Destination Hope was once again on the same remote island in the Philippines with Destination Hope.  Once again, we were tasked to repair cleft lips and palates.  As I finished routine surgery on a patient on my way out of the OR, I was greeted by a small woman with a beautiful toddler standing next to her in the waiting area.  She looked familiar.

It was an instant moment of recognition, as we both stared at each other, despite the language barrier.  She found out that our team was back and traveled quite a distance to the hospital where her son almost died.  She came to specifically seek me out.  Holding back tears and trying to stay strong, I inched forward towards her with measured steps.  We shared a warm embrace as she began to profusely thank me for restoring her son’s beautiful face three years ago.  Little did she realize the power of her embrace.  With her embrace, she immediately restored my love for these missions.  With her embrace, she answered all my questions that I held inside for so many years.

She allowed me to hold her son, my little patient is now almost five years old.  I thanked her for her kindness and courage in facing this challenge that no mother should have to deal with.   I apologized to her about the complication that he suffered, for which I still did not have answers.  Even though he is improved, he still has episodes of seizures.  She told me how happy she is that I made her son beautiful and that he is growing well.  As we parted, I realized for this moment, I was not her surgeon; I was a fellow parent talking to a grateful mother.  I may have surgically restored her son’s smile, but she spiritually restored mine.

4 things we should be teaching in medical school, but aren’t

Advances in hepatitis C treatment. Why aren't they being used?