We all know them. We see them on TV. We read about them in the paper. And, with the explosion of social media, you hear about it from people you know. If you have a Facebook account with a sizable enough network of friends, you’ve probably seen at least one negative comment about vaccines. On one end of the spectrum, there are the seemingly innocent people who claim that they don’t get a flu shot because every time they’ve gotten one in the past it has made them sick. On the other end, there are the more conspiracy-prone “anti-vaxxers” who believe that vaccines harm — for example, causing autism — rather than help.

Consequently, as fewer children are vaccinated, there are opportunities for outbreaks of diseases to occur. For example, we’ve recently seen some of the worst outbreaks of pertussis (“whooping cough”) in this country in decades. The CDC documented more than 48,000 cases of pertussis in the U.S. in 2012 — the highest rate since 1955. Fortunately, if you can consider this at all fortunate, only 20 of those cases resulted in death and most of those happened to newborn infants. The problem is, most, if not all of those illnesses and deaths could have been prevented by vaccination.

Fast forward to 2014, and there’s a whooping cough epidemic in California. At the same time, California is dealing with the measles outbreak that originated at Disneyland and has now spread to include cases in 14 states. Before that, there were 644 cases of measles in the U.S. in 2014, which is the most cases this century. Clearly, we’re seeing a link between parents’ decision not to vaccinate their children and these outbreaks of illness.

Let me take a moment to say that I understand that parents probably think they’re making the right decision when they choose not to vaccinate. I don’t think most parents would intentionally harm their child. Instead, what I think is happening is that they have grown up in a world where they haven’t seen these diseases firsthand. To the person who has grown up in a country without smallpox, without polio, without measles, and very minimal cases of pertussis, mumps, rubella, and the like, the supposed dangers of vaccines likely seem far more likely than the dangers of the diseases the vaccines are designed to prevent. Never mind that the doctor who fabricated the vaccine-autism link in England has admitted to falsifying the data and has had his medical license revoked. By similar logic, the mistaken belief that the flu vaccine makes you sick is likely to be seen as a bigger risk than possibly contracting the flu; despite the fact that the flu kills thousands — and often tens of thousands — of Americans every year.

The problem — as this article in the Washington Post highlights — is that the decision not to vaccinate your child is a decision that puts the health and lives of others at risk, even if they have been vaccinated as a child (because our antibody titer, or levels of immunity, decline over time).

The bottom line is that there is no science to demonstrate that vaccines are harmful, and plenty of science to demonstrate that the diseases vaccines prevent are especially harmful. But don’t just take my word for it. Watch Larry Wilmore’s comedic rant on the subject, and read this informative piece — which contains lots of useful links for you to educate yourself on the importance of vaccines. We have the power to prevent a number of important diseases. To save lives. And for a variety of reasons, we let that opportunity pass us by.

As a faculty member in a school of public health, that troubles me, and it should trouble you.

What do patients really want from doctors? 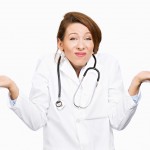 We have the power to prevent disease. But we’re not using it.
16 comments