On a 12-hour shift in the hospital, I recently spent a mere hour with patients, with the rest glued to a computer screen, to the “iPatient.” When a patient comes to the hospital, speaking to them has become an afterthought to reading extensive medical records, physical exam findings from the emergency room, and synthesizing laboratory data. I, as a millennial doctor, have been on the cusp of this shift. My first patient interview in 2nd year of medical school lasted over two hours. As a resident, my chart review takes two hours, while examining and talking to the patient serves as a tool to validate pre-formed hypotheses. Instead of asking whether the EMR produces better results, we might ask, is it fundamentally changing the ways doctors think?

The short answer is yes. The advent of EMR has changed how we test hypotheses, use heuristics, and synthesize information. Here is an example. The other day, a 70-year-old diabetic presented after a car crash, an unrestrained driver going 40 m.p.h. into a tree. Was this an episode of low blood sugar, a cardiac arrhythmia, or a simple case of falling asleep at the wheel? With no access to a trove of electronic data, I found myself at the bedside.

One hour later, my interview tested a dozen separate hypotheses. (What was his sugar after the crash? Could the lack of skid marks mean he had a heart attack?. I used the representative heuristic and judged that if it was an episode of low sugar, he would fit the script and would have felt lightheaded or “off” before the episode. An hour later, I sat down to write up the case on the EMR. Oddly, I found that I had done over 90 percent of my thinking. Similar to my experience in large lecture halls, I found my gaze opaque. I mindlessly clicked through dozens of boxes and then frustrated, quickly documented my thought process.

The process of hypothesis testing at the bedside is becoming increasingly rare. For the vast majority of cases, I spend my time constructing a hypothesis on the computer. (Did the patient have an elevated white blood cell count five years ago when they had cellulitis? What should the echocardiogram from last month make me listen for on examination?) After going through this exercise, I feel I have captured the essence of the case.

My heuristics are also different. Instead of asking, “What might be the prevalence of bone infection in the patient sitting in front of me?”, I ask, “What data is on file about their history of bone disease?” These are fundamentally different questions. The former draws on data about the patients social determinants of health (are they homeless, recently been on steroids, been drinking a little more than usual), while the latter draws on outdated and potentially inaccurate information.

On the EMR and at the bedside, clinicians still test hypotheses, use heuristics and synthesize this information to capture the essence of the cases. And yet these processes are not the same: We start asking different questions, activate a different set of biases, and synthesize a different story. It is undeniable that EMR lead to a decrease in certain types of medical error, a more comprehensive medical history, and improved communication.

As a tool for clinical reasoning, documentation is not thinking. For that, we need to go to the bedside to think alongside patients. The computer will not tell us whether there were skid marks in the car crash, whether the driver took his seatbelt off at the scene or the character of pang in his heart on the steering wheel. When we leave the computer screen, the opaque gaze may lift, even if briefly, and we can start asking clearer questions and answering those of our patients.

A holiday message from your emergency physician 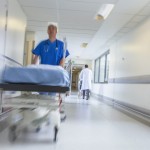