So many foods beckoning us from the grocery store shelves — but which ones are healthy for us to consume? We could study nutritional facts labels, but that feels as challenging as the math portion of the SAT, with so much numerical information to process. The label tells us how many calories are in the food in question — how many grams of protein, how many grams of fat, and of saturated fat (is that the good or bad fat?). It tells us how many milligrams of cholesterol and sodium, causing many Americans to wonder: Is a milligram bigger or smaller than a gram? Consumers have to understand what a gram is, how many calories is too many or too few to eat. And they need to figure out what percent of any given nutrient they ought to consume at any one time.

To our rescue or at least the rescue of the British population — comes stoplight symbolism. Food companies are beginning to adopt a simple system of red, yellow (they call it amber in the UK), and green colors, to signal which foods people should avoid or embrace. The stoplight symbol is used to give people quick insight into numerical info about food facts — calories, fat, saturated fat, sugar and salt.

Food high in all five of these ingredients will reveal a red symbol under each category — five red lights — signaling that it is probably not a healthy snack. By contrast, as the National Health Service in the UK informs citizens, “If you buy a food that has all or mostly greens on the label, you know straight away that it’s a healthy choice.

What a bunch of hooey!

Consider Coca-Cola, which announced it will be adopting the voluntary labels. As you can (kind of) see from the picture below, the sugar-sweetened version of Coke will now display a red light symbol next to the sugar info, whereas Diet Coke will be green — a quick glance tells you that Diet Coke is better for you than regular Coke. So far so good, I guess. I’m a fan of these kinds of normative labels. Good public health information should, whenever possible, be fast and simple for people to grasp. 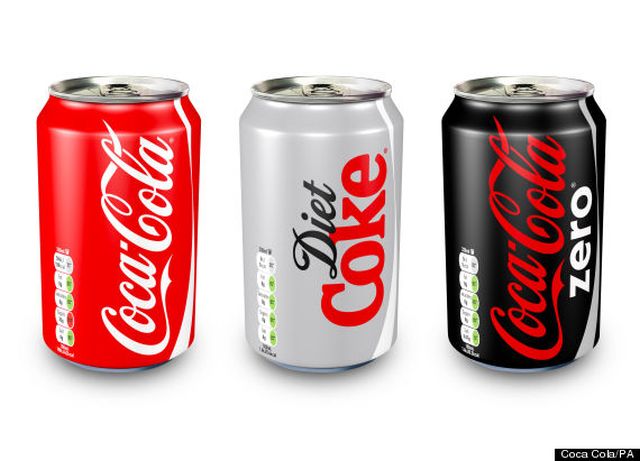 But ponder the sugary-coke label in the light of the NHS distinction, that “mostly green” points people towards “healthy choices.” Coke, after all, is low in fat, saturated fat, and salt. Moreover, because industry is allowed to define serving sizes in the UK, the Coca-Cola Company can decide that 8 oz constitutes one serving of Coke, and therefore that beverage also receives a green light next to the calories label. Four out of five green lights — Coca-Cola looks healthier than kale juice!

The problem with the UK stoplight labels is that they break nutrition down into an unhelpful set of categories, with what is increasingly looking like an unhealthy emphasis on decreasing fat. And the label does nothing to indicate the presence or absence of positive food traits. Nothing, for example, to indicate whole grains versus refined ones.

Thus, horribly unhealthy products like sugary soda look healthier than they are. And non-nutritious “foods,” like diet soda, look healthier than, say, strawberries (which, after all, have lots of sugar). The stoplight nutrition label hasn’t kept up with nutrition science. We are increasingly recognizing that sugar is harming our health at least as much, probably more, than fat and salt.

For an example, a study published in the Annals of Internal Medicine recently showed, for example, that people who avoid carbs in their diets have a much easier time losing weight than those avoiding fats. And the sugar — that is by far the #1 carb! Just one can of Coke contains eight teaspoons — yes, eight — of sugar. Almost half of the added sugar we consume comes from sweetened beverages.

Coke is not healthy!

I enjoy drinking the occasional can of Coke. (Diet Coke, blech!) But I don’t kid myself that I’m consuming a healthy beverage. We shouldn’t encourage the industry to pursue nutrition “facts” labels that mislead consumers.

The UK stoplight system is a step in the right direction, to not only inform people about what they are eating, but to give them a signal about what they ought to eat and what they should avoid or consume in moderation. I’m a fan of informative persuasion — of nudging people to engage in healthy behaviors.

But we have a long distance to travel, before we arrive at nutritional facts labels that quickly inform consumers about what is good and bad for them to ingest.

From medical student to patient, in a matter of minutes