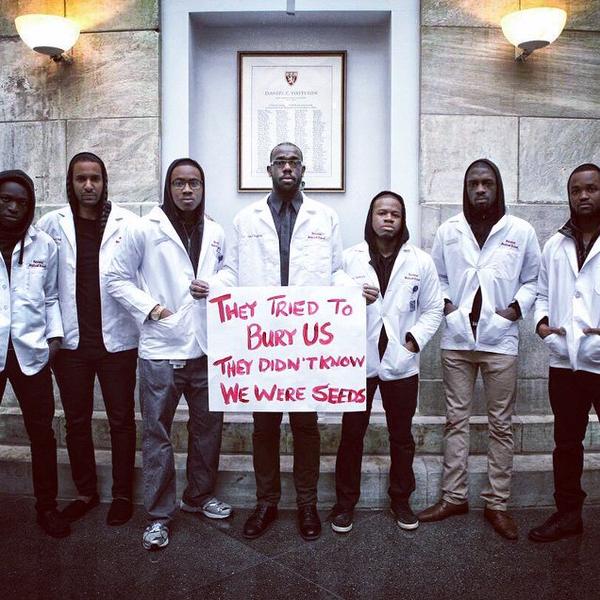 Recently, over 70 medical schools across the United States organized a mass “die-in” to silently protest back-to-back decisions to not indict law enforcement officers involved in the unfortunate deaths of two unarmed Black men within the context of an overall concern about systemic racism and the victimization of Black men by law enforcement. You may have seen the phrase “#WhiteCoats4BlackLives” in reference to this movement on trending on Twitter, or featured on media outlets like CNN, MSNBC, and the Huffington Post. We stand unified around “#WhiteCoats4BlackLives” not to suggest that the lives of others don’t matter, but bring attention to the difficulties that all who identify as Black in America face. We felt it necessary to not remain silent in the face of such grave injustice.

We moved not just for Eric Garner or Michael Brown, but for all individuals of color in this country that are a constant witness to racism and the legacy of egregious actions from our society toward Blacks that has shaped the very fabric of our nation. From the 19th century experimentation on Blacks during chattel-slavery in the U.S., to the American Medical Association’s outright exclusion of Blacks until the late 60’s (without apology until 2008), it is clear that medicine in the U.S. has a very dark past that has, unfortunately, shaped its present.

It is essential that medicine as a profession begin a sustained conversation about its role in addressing racism in our communities and the systemic biases embedded in medical education and clinical care. The mobilization of physicians and medical students nationwide for this cause is testimony to just how important this message is to the future of our profession and the greater good of society.

A costly anomaly on a brain MRI

Medicine is complex, but doctoring is viewed as being simple