A 38-year-old man is evaluated for a mass in his right neck that he first noticed 2 weeks ago while shaving. The patient also reports experiencing a pressure sensation when swallowing solid foods for the past year and daily diarrhea for the past 2 months. His personal medical history is unremarkable. His younger brother has nephrolithiasis, and his father died of a hypertensive crisis and cardiac arrest at age 62 years while undergoing anesthesia induction to repair a hip fracture.

On physical examination, vital signs are normal. A mass is palpated in the right lobe of the thyroid gland. No cervical lymphadenopathy is palpable.

A chest radiograph is normal. A thyroid ultrasound confirms a 1.4-cm mass in the right lobe of the thyroid gland.

The correct answer is B: Multiple endocrine neoplasia type 2.

Benign familial hypocalciuric hypercalcemia is a rare familial condition caused by inactivating mutations of the calcium-sensing receptor, which has a major function in regulating calcium metabolism through parathyroid tissue and renal calcium. The disorder is autosomal dominant with high penetrance. Decreased sensitivity of the calcium-sensing receptor to calcium is typical of this disorder and thus higher calcium levels are required to suppress parathyroid hormone secretion. Fractional excretion of calcium is less than 1%, despite the hypercalcemia, and the PTH level is normal or slightly elevated. The clinical significance of this disease lies mostly in its mistaken diagnosis as hyperparathyroidism. Benign hypocalciuric hypercalcemia does not explain the patient’s thyroid mass or the father’s probable pheochromocytoma.

Parathyroid cancer may be palpable on physical examination, but hyperplastic parathyroid glands with benign enlargement would not. Additionally, parathyroid cancer would cause more severe hypercalcemia and does not explain the patient’s personal history of diarrhea or his family history.

Sarcoidosis causes hypercalcemia by production of 1,25-dihydroxyvitamin D by granulomas. This patient’s neck mass and normal chest radiograph are not typical of sarcoidosis. 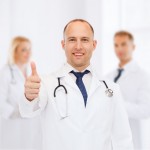 Learn to use a fax machine, and other medical student tips