A few months ago I assessed a patient with dementia.  I dutifully ordered the appropriate blood testing and MRI.  As I delved further into the history, I was concerned that there may be a component of depression. Pseudodementia (memory disturbance and dementia like symptoms caused by depression) can often mimic classic Alzheimer’s disease, but resolves with proper treatment.  The best way to differentiate these two syndromes is neuropsychological testing.  I decided to send my patient to a colleague whom I had been working with for years.  He had recently joined a large multi-specialty group owned by the major hospital system in our area.

The patient returned to my office a few weeks later.  Not only did he get the consult, he also was sent directly to the neurologist next door (who worked for the same medical group/hospital), and had all his blood work and MRI repeated.  He was placed on a dementia medication called Aricept.  Now most primary care physicians can manage run of the mill dementia without a neurologist’s input, and many agree with the American Geriatrics Society’s Choosing Wisely campaign that Aricept should be used sparingly.  So it seems my innocent and appropriate neuropsychology consult turned into a very expensive episode fraught with repetitive and unnecessary care.

A recent study in JAMA by James C. Robinson and Kelly Miller examined per patient expenditures for hospital-based practices in comparison to those that are physician owned.  They found that hospital practices were 10.3 percent more expensive and multi-hospital system owned practices were 19.8 percent more expensive then private physician practices in the period from 2009-2012.  The goal of the study was to examine the effects of work force consolidation among providers that was occurring at a breakneck pace as a result of Obamacare (for a good discussion of consolidation and Obamacare see Scott Gottlieb’s article in Forbes).

Whether intended or not, this is just another example of how governmental policy is both failing to bend the cost curve, and having a neutral if not negative effect on healthcare quality.   In fact Washington has been dead wrong more times than not.  There is no better example than the Medicare demonstration projects.  Lauded as government innovation, these projects were set up to test the most prescient beltway policies.  In January 2012 the Congressional Budget Office produced a memo titled: Lessons from Medicare’s Demonstration Projects on Disease Management, Care Coordination, and Value-Based Payment.  They concluded that of the ten projects to date,  the improvements in cost and quality had been negligible.

More recently there has been a much hype about pay for performance.  Aaron Carroll does a nice run down of how it has failed to show benefits in his New York Times piece.   The promise of electronic medical records and meaningful use was just another disappointment as documented by the RAND Corporation’s most recent analysis.  The Bundled Payments For Care Improvement initiative is now well under way and is the next in a long line of innovations which is expected to fail.

Looking into the future,  I am strongly in favor of the governments ability to form and test hypotheses.  Demonstration projects can help us predict which policies may actually lead to improved healthcare.  The problem is the government tends to look before it leaps.  Health care consolidation,  pay for performance, PQRS, and meaningful use are already prime time even as the studies to prove their effectiveness are coming up empty.

They didn't do anything! The inverted homeopathy of the ER. 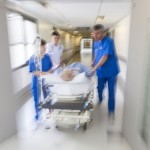 Why does the government fail to bend the cost curve?
7 comments