Almost every practicing doctor remembers the grueling hours and intense workload of residency.  I recall overnight calls when I ran around from floor to floor, my beeper never stopping. I would collapse at home the next morning exhausted, drained and a little depressed.  I would never want to relive residency, but I do look back at it with a sense of accomplishment.  In some ways, it is a badge of honor.

A lot has changed since I was a resident.  Most notably duty hour reforms have strictly cut down the hours that residents can work. In 2011, the Accreditation Council for Graduate Medical Education (ACGME) rolled out national and transformative duty hour reforms that limited resident work hours to 80 hours per week with interns working no longer than 16 hours straight.

The impetus for the massive change was fear that the lack of sleep during long shifts led to medical errors.  Recently, two articles published in the Journal of the American Medical Association counter this claim.  Both studies found that the 2011 ACGME work hour reforms had no effect on patient mortality, readmissions, and surgical complications.

Specifically, one study that was done by a group from the University of Pennsylvania found that the risk of a patient dying in the hospital or the thirty days after hospitalization was exactly the same before the reforms were in place versus after.  The same was true for hospital readmissions within 30 days of discharge. This was after the researchers accounted for differences in patients.

The other study which was done by the American College of Surgeons and other looked at patients who had surgery before and after the duty hour reforms. They found that the reforms had no effect on mortality rates for surgical patients nor had any effect on the rates of surgical complications such as post-operative infections, heart attacks, and kidney failure.

So what should we take away from these studies? Should we rescind duty hour reforms?

Like any policy or program there are pros and cons.  These recent studies suggest that one of the anticipated pros of better, safer patient care is not panning out as we expected.  And these findings add fuel to program directors and hospitals who argue that duty hour reforms have increased the number of handoffs, increased costs, and created staffing challenges.

All these arguments are valid, but one very positive effect that I have noticed it that duty hours have forced residency programs to think carefully about the job of interns and residents.  Because their time is limited, there is a realization that some of their work should be done by other people.  Often this is the scut work that we all remember from residency: scheduling appointments, tracking down medical records, drawing bloodwork.

In our own resident program, we now have a care coordinator who tracks down outsides records and schedules follow-up appointments.  The residents are visibly happier to not be doing this work.

Perhaps the next study of duty hour reforms should look at what residency programs have done to change the work content of residents.  It seems to me that residency programs are finally grasping that much of what we did in residency was not educational and in some ways was detrimental to our careers as future doctors.  Being an intern who did everything created habits that made it more difficult for us to delegate and work in teams later on in our careers. Perhaps residents these days won’t have quite the badge of honor that I had, but perhaps they will have better skills to be twenty-first-century doctors.

Should ACLS certification be mandatory? 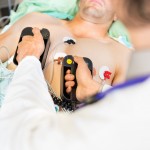 Is there any benefit of duty hour reforms?
5 comments