At a recent conference I was approached by more than a few colleagues and asked about the Kardashian Index (K-index). For those oblivious to the term, K-index is a ratio of a researcher’s Twitter followers (as a measure of “celebrity”) over the number of their research citations (as a measure of “scientific value”).

The article implies, and I quote: “A high K-index is a warning to the community that researcher X may have built their public profile on shaky foundations, while a very low K-index suggests that a scientist is being undervalued.”

Many physicians were wondering if they should maintain their presence in “Twitterverse” (cyberspace area of Twitter, with more than 500 million active users) as academic community may view this negatively. I found this thought-provoking, particularly in a time when misinformation on Ebola is wide spread across Internet and the presence of physicians, as health advocates and educators, in the digital world is important and can even be viewed as a part of their social accountability.

The good: Many conversations around K-index showed me that at last clinicians (leaders, educators and researchers) are getting interested in social media and the impact it may have on their careers. Unfortunately the fact that K-index worries so many of my colleagues also pointed out the misconception that still exists around the simple notions such as followers, citations, dissemination and influence.

The bad: The K-index author uses number of followers to index influence online. The number of Twitter followers can easily be manipulated and has no relation to ones influence online. Arguably using “influence score” provided by websites such as Klout, Kred or PeerIndex would have been a better index for this. Being on Twitter has never been about number of followers, which can easily be inflated (just tweet #FollowBack and see your followers grow!), it’s about the quality of interactions. Also, the number of your citations says nothing about the quality of your research. You can have published a totally misleading article, which raises the scientific community in arms against you, who will publish numerous articles against yours, which will still make your citation number rise!

The ugly: Physicians have always concentrated, with valid and good intentions, on disseminating their research results behind peer-reviewed walls of high-impact journals. This is debatably one of many factors that provoked the 2014 measles outbreak in the U.S. (at least 599 confirmed cases of measles in 2014). The famous retracted Lancet article linking vaccination and autism (published 1998, cited by 1960, retracted 12 years later in 2010) is a perfect example of the ugly consequences of focusing our dissemination to high impact factor journals and ignoring the popular media, including social media.

The scientific community went in arms against the anti-vax movement after the Lancet article but used the only dissemination defense they knew: peer-reviewed publications in journals with high impact factor. Although the message got through about the safeness of vaccines to other physicians, not many thought about communicating it in the digital world of Internet, where many people were (and are) looking for answers.

On the other hand, the anti-vax movement used the communication tools they knew: TV, newspapers, low-impact journals, and social media. Though the rise of anti-vax movement is more complicated than described here, I ponder on the fact that if scientific community have been more present in these non-peer-reviewed media, the U.S. may not have been struggling with a measles outbreak in 2014.

My aim is not to discuss the benefits of vaccination but merely to point out the serious consequences when physicians concentrate on their old ways of calculating disseminations (h-index and impact factor) and ignore the new dissemination tools as a fad. No matter how many times we blow the horn of privacy and professionalism concerns (and now the risk of being called a Kardashian clinician) the fact remains that our patients are using those tools to get information on Internet, and if we don’t do our health advocacy there and educate them, someone else will.

Looking at this today, when we’re dealing with an Ebola outbreak, and seeing all the fear-mongering and sensationalization on TV, Internet and social media, I believe it’s more important than ever for physicians to think about their social accountability in the digital world. They should see it as an important part of their role as health advocates to be present on social media to educate the population at large, even if it means being labeled, by a few, as Kardashian clinicians.

Alireza Jalali is social media in medical education advisor, Royal College of Physicians and Surgeons of Canada, and can be reached at his self-titled site, Ali Reza Jalali. This article originally appeared in CMAJ Blogs.

EMRs remove the soul of the medical record. So, what's next? 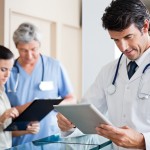 Autism's cause: How much genetic? How much environmental?

Physicians and their social accountability in the digital world
5 comments