I listened to my favorite news radio station out of New York City while driving to the office recently. They address all of the major news stories in the first eight minutes of every hour and half hour. I listened from the top of the hour for the full eight minutes, until traffic and weather rolled around again. Ebola did not make the cut; it was not mentioned.

Now, to be fair, Ebola was mentioned on the same station later in the day. I heard a public service announcement about it by the New York City health commissioner. And I heard a brief news piece about hospitals purchasing better protective gear to meet new and improved CDC standards. But still, nothing that qualified for marquee placement in those coveted eight minutes of fame (or infamy).

In a matter of mere days, we have gone from all-Ebola-all-the-time, to yesterday’s news.

Has the problem gone away? Certainly not in West Africa. Our failure to remain attentive to the crisis there may mean an unwillingness to allocate the global resources required to address this problem effectively at the source. It may mean the suffering and misery on-going where Ebola is a genuine threat to the general population, the risk for additional transmission to global travelers, and the root causes of not just this outbreak but the next — will all fly below our fickle radar.

Has the problem gone away in the United States? There have been no new cases, and a number of close contacts of the cases to date have come off quarantine. But let’s face it — there never was much of a problem here. Two people diagnosed abroad came home for treatment, with no subsequent transmission. Four other cases have been diagnosed here, the first a family member of Ebola victims in Liberia, and all of the others health care workers directly involved in the hands-on care of Ebola patients.

So to summarize the former basis for our apparent hysteria, then: We had four cases diagnosed out of a population of over 300 million of us, and the apparent risk to anyone not actually touching people sick with Ebola was absolutely zero. There was never any indication of a threat to the population at large, but we certainly reacted as if there were.

Now, apparently, the news media have decided that we’ve had quite enough of that nonsense, and it’s time to move on.

But it is not time to move on today, any more than it was time to panic yesterday. The news cycle is designed to gravitate between afflicting the comfortable and comforting the afflicted. Once amply afflicted with an exaggerated idea of the threat of Ebola to each of us, we were due for a comparably excessive dose of comfort, implying the problem had gone away.

As noted, the situation in West Africa remains dire, if improving, and much in need of the world’s on-going attention and resource allocation.

Our attention span is notoriously short, and our ability to gauge risk notoriously flawed. We are more apt to panic over remote threats we can’t directly control than deal constructively with threats many orders of magnitude greater that we can. Hyperbolic headlines fan the flames of this apparently native fire.

Real problems, in the real world, are rarely solved by either the excessively afflicted or the unduly comfortable. Real problems, like Ebola, tend to populate the space between cause for panic and allowance for apathy.

Real solutions, whatever the headlines, tend to reside there as well.

5 new rules for how doctors interact with health care IT 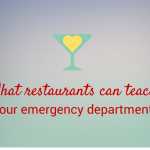 Ebola is yesterday’s news, but should the media move on?
7 comments