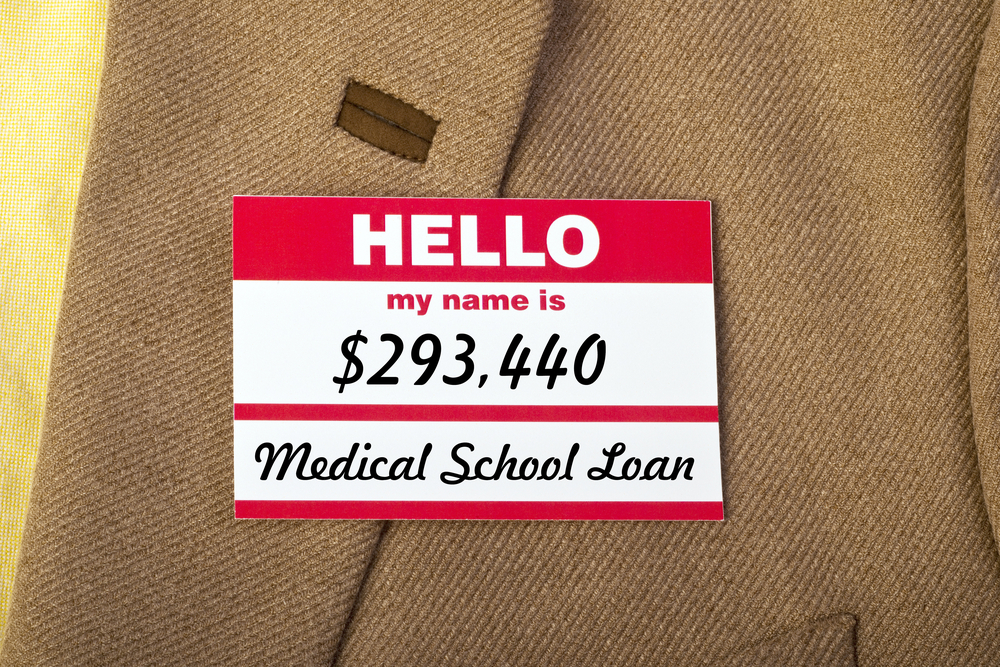 Each year, over 20,000 U.S. students begin medical school.  They routinely pay $50,000 or more per year for the privilege, and the average medical student graduates with a debt of over $170,000.  That’s a lot of money.  But for some who pursue careers in medicine, the financial cost has been considerably greater.  Melissa Chen, 35, a final-year radiology resident at the University of Texas San Antonio, calculates that her choice of a medical career has cost her over $2.6 million in lost wages, benefits, and added educational costs.  And yet in her mind, the sacrifice has definitely been worth it.

Chen’s story explains why.  Her father is a doctor and her mother a pharmacist.  She was always a good student.  So a career in medicine would have been a natural.  But her father encouraged her to explore a variety of career options, and her mother had always been very interested in business and the stock market.  So Chen chose to attend one of the nation’s top business schools.  When she arrived, she quickly realized that many of the students had a clear plan: To get their degree and go to New York to pursue a lucrative career on Wall Street.

“I loved my classes there,” Chen says.  “It was fun to see how what you were learning every day would apply in the real world.  Determining how well a particular business or the economy as a whole is performing was fun.  We felt like scientists.  You could collect the data, run the equations, and come out with an exact number.  It answered huge questions, like ‘Are we in a recession?’  And it was amazing how smart my fellow students were.  Many of them came from affluent backgrounds and already knew so much about business.  At times, it could be intimidating.”

So Chen took her business degree to New York, where she had secured a great job with one of the largest investment banks in the world.  Perhaps because she was from Texas, she had been slated to start with their oil and gas division, where she would help energy companies with mergers and acquisitions and the financing of businesses with equity and debt issuances.  Her first day on the job proved unforgettable, not so much because of her new office, the employees she met, or the nature of her responsibilities, but because of the date itself: September 11, 2001.

Chen’s office was located about a block from the World Trade Center.  As soon has she arrived, she phoned her mother to share her excitement, but she realized immediately that her mother sounded quite worried.  Within seconds, Chen says, “She told me to get out of the building right away.”  As Chen left, she could feel the heat from the burning first tower, and before she could get more than a block away, it collapsed.  “There was a loud rumbling noise,” Chen says.  “It was like a bomb exploding.  I started running as fast as I could, but I was in high heels, and I was certain I was going to get stampeded and die.”

“When I finally got far enough away that people were no longer running,” Chen says, “I stopped to catch my breath and turned around.  The building was gone.  The rest of the day and all that night, I was with a colleague who was worried that his father had been in the World Trade Center.  He kept phoning and phoning, but could get no answer.  Finally, we learned that his father had been in the building when it collapsed.  It was devastating.  From that moment on, I began to view life differently.  I realized how quickly everything you love can disappear.”

When work at the firm resumed, Chen threw herself into it.  She worked hard and enjoyed considerable success, helping to put together business deals worth huge sums of money.  At first the hours seemed almost overwhelming, but she soon realized that people treated working late into the night as a badge of pride.  People would brag, “Man, I haven’t even been home in two days!”  After a bit more than a year on the job, Chen was slated for promotion, but her 9/11 experience led her to take a closer look at the people above her on the corporate ladder.

“People were very successful, but they also seemed deeply unhappy,” Chen says.  “They would tell me things like, ‘This job is horrible’ or ‘My life really sucks.’  So I would say, ‘Then why don’t you quit and do something else?’  And they would look at me with incomprehension and say, ‘Everyone knows this is what I have to do to get to the next level.’  But it was beginning to dawn on me that no matter how high up the ladder you ascended, everyone still seemed to keep saying, ‘I hate my job, but this is what I have to do to move up.’”

“After a while, it seemed pretty absurd” Chen continues.  “Here they were, some of the best-educated and most highly compensated people in the world, people who could do almost anything they set their sights on, and they were just miserable, getting all stressed out over some marketing project for a bank.  I couldn’t help but compare it to phone conversations with my dad.  I would ask him about work, and sometimes he would talk about the stress he felt, but at least when he was stressed it was because the life of one of his patients was on the line.”

“I began to realize that much of what had attracted me to investment banking in the first place wasn’t as real as I thought.  People were all uptight over money.  But to me, having been there when the twin towers collapsed, it just didn’t seem so meaningful.  At meetings and parties, they would smile and be so nice to people, but it was all about ‘networking.’  My co-analysts acted so sweet toward those who could advance their careers.  And then they would smile thinking about how fun it would be to tell the higher ups to just take this job and stick it.”

“For me,” she continues, “the turning point came one night when I was working late.  I phoned home.  ‘Dad,’ I asked, ‘Do you ever regret being a doctor?’  ‘No,’ he said.  ‘There are some rough times, but I have never stopped believing in what I do, and that makes me happy.’  The next day, I told the people in the office that I was going to go to medical school.  They said, ‘Are you crazy?  You could move up in this company.’  I think my boss felt almost betrayed.  ‘We were grooming you to advance,’ he said.  ‘Are you sure you don’t want to reconsider?’”

“But I didn’t,” Chen continues.  “So I enrolled in a post-baccalaureate program to complete my premedical requirements and then started medical school back in my hometown of San Antonio.  It has taken two years of additional premedical studies, four years of medical school, and five years of residency, for a total of 11 years.”

Given the huge sacrifice in time and money, was it worth it?  Chen answers without hesitation, “Yes it was.  Sometimes I felt impatient, and sometimes I felt a bit out of place, because most of my classmates came straight from college.  But from the first day, I knew it was better.”

When Chen speaks about her life in medicine, the weary tone that marks her reminiscences of life in investment banking gives way to enthusiasm.  “Though I work as hard as I did before, it does not feel like a drag, because I can see directly how it is helping patients.  It is a feeling that I never really had in business.  Even after closing a big deal, I would often ask myself, ‘Are we really doing the right thing for our clients?’  In medicine, you have the privilege of knowing that you are truly working for your patient, always trying to do the best thing for them.”

Chen tells numerous stories of patients whose lives she has touched, many of whom have touched her life.  One night when she was on call in the hospital, a middle-aged man came in with constipation and abdominal pain.  A CT scan was ordered, and when Chen read it, she recognized subtle signs of a colon cancer.  The patient went to surgery that night.  Said the emergency department doctor, “Your reading of the CT scan totally changed the way I managed that patient.  I was going to give him an enema and send him home, but thanks to you, he is now getting treated for his cancer.”

Sometimes it is not making a life-saving diagnosis but simply building a relationship with a patient that makes all the difference.  Chen was treating a young woman with Down syndrome and a hyperactive thyroid gland.  Instead of just administering the treatment and leaving, Chen stayed with the patient, listening to her as she described her favorite toys.  “I didn’t understand everything she said, but she was just so animated and enthusiastic.  Before I left, she had hugged me many times.  I tell you, that girl really made my week!”

I asked Chen how she feels about the growing role of business in medicine today.  “With all the talk of productivity and declining payments, I sometimes have to remind myself that I am not doing this for the money,” she says.  “Unlike business people, doctors are not here to enrich the shareholders of a company.  Sure, some business practices could make medicine more efficient, and we should take advantage of those.  But these things must be very carefully applied, and we should always remember that our primary mission is to serve our patients.”

Chen has learned that perpetual anticipation is no attitude with which to go through life.  Her colleagues in business would always say, “Sure, life is tough, but this is the price we have to pay to advance to the top and make the really big bucks.”  But even at the top, Chen says, “The day when they could stop and enjoy it never seemed to come.”  Chen has applied this same lesson to marriage and parenthood, having taken time off to have two babies during her residency training.  “I have learned that if I really want to have a good life and make a difference, I need to live now.  I can’t keep putting it off into the future.”

If there has been a turning point in Chen’s professional life, it came on 9/11.   It was the experience of running at full-tilt away from the collapsing World Trade Center, knowing that at any moment the smoke and heat could engulf her, and fearing that she was about to be crushed under the ruble of the towers and the feet of the stampeding crowd.  Compared to that, the costs of pursuing a medical career — even $2.6 million — pales by comparison.  Looking at life from this point of view, she never gets too discouraged.  “Every day,” she says with a smile, “I just feel so grateful for the chance I have to make a difference for my patients.”

When joining a medical practice: The importance of autonomy

$2.6 million: Is the cost of becoming a doctor worth it?
5 comments