A friend of mine, a diabetic who has been pretty passive about his medical care, suddenly learned the importance of patient engagement a few weeks ago when a matter affecting his pocketbook grabbed his attention. A bill arrived from Express Scripts, the pharmacy benefit manager (PBM) for Emblem Health, a Medigap plan offered to former New York City employees.

For years my friend had been taking the drug gemfibrozil that diabetics often take to lower triglycerides and cholesterol. That drug has worked for him. No nasty drug interactions. No nasty side effects. Plus the price has been low: $2.71 for 60 pills. In August, the price more than doubled to $6.14 — still a bargain when you consider what most brand-name drugs cost.

In September, Express Scripts sent a letter to my friend’s doctor suggesting that, for reasons of “safety and efficacy,” he should switch my friend to a different drug, a generic called fenofibric acid that would cost him $156.70 for 90 pills, his share of the cost required by his insurance policy. Fenofibric acid costs $1.74 per pill compared to gemfibrozil’s 10 cents a pill, resulting in an out-of-pocket cost increase of 1,640 percent.

Fenofibric acid supposedly performs the same therapeutic function as gemfibrozil. “Why the switch?” my friend asked his doctor. The doctor pointed to the reasons given in the letter about an increased risk of skeletal muscle effects and said maybe it was advisable to try the new drug. While his doctor was astonished by the price increase, my friend said it was clear he wasn’t going to buck the recommendations of the PBM.

My friend complained to an official at New York City’s employee benefits office who said she had never heard of a PBM recommending that a more expensive generic drug replace a cheaper one. The benefits office contacted Emblem Health, which dispatched a representative to look into the matter and contact the PBM to see if my friend could continue taking gemfibrozil.

In the meantime, my friend checked the local pharmacy to see what it would cost if he had to buy fenofibric on his own, bypassing his insurance company and the PBM. For a 90-day supply, he would pay $554.89 or $6.17 per pill. For a generic? That was what brand-name drugs cost! I was puzzled.

For the last several years the mantra has been “buy generics” as a way to lower the cost of drugs for consumers but also for the nation. For a while generics did that. Not anymore. I contacted John Rother, former chief lobbyist for AARP and now head of the National Coalition on Health Care, which is in the midst of a campaign to educate the public about the exorbitant prices of drugs, particularly the hepatitis C drug Sovaldi and other specialty drugs that will soon come on the market and carry super-high price tags.

“Generic prices have been rising and quite steeply,” he said. “So something is going on that reflects a fundamental change in the market. There doesn’t seem to be an explanation for it.” Rother explained that some generic drug makers have left the market, allowing the ones that remain to gain market share and raise their prices.

Maybe there are clinical reasons for my friend to make the switch, but so far his doctor has not been persuasive. Who’s treating the patient –the doctor, the PBM or the insurance carrier? How does any patient know who’s right?

Since individual patients can’t negotiate prices with drug companies, and since Congress has prohibited Medicare from doing that, my friend says, “It’s carte blanche to rip people off. In situations like this no one ever talks straight, but someone is making a lot more money.”

Rother has another concern. “Four years after we passed what we thought was universal health coverage, you can’t get the medicines you need because of the prices. It’s tragic,” he says.

Running a code is a team sport

The striking parallels between warfare and emergency departments 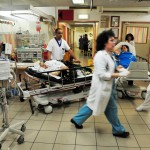