Pain is one of the few things in life universally common to all races, all ages, virtually all people for the history of time.   Though it is always with us, it is also the most difficult of human feelings to describe or even talk about. Doctors in an attempt to understand the degree to which we hurt invented a 1 to 10 pain scale.

I was very fortunate my first 47 years of life as the most serious pain I had experienced was a broken collar bone at age 16. On a beautiful fall day in 2004 that changed when I fell 19 feet from a ladder and dislocated my elbow.  I was hyperventilating as my wife drove me an endless mile to a local clinic. As the doctor filled out his form he asked me the question: “On a scale of one to 10 how would you rate your pain right now?”

As clearly as I remember that extreme pain the amazing relief that came when the doctor and two nurses pulled with all their strength and my arm bones popped back into the socket is even more vivid.

Two weeks later, I awoke after a radial head implant surgery to pain that made the dislocation seem like nothing. I spent that sleepless night with my finger constantly pounding the morphine PCA pump button. “10” had completely new meaning. The next day I would reflect that the dislocation pain was now at best a 7 or 8. My pain scale had somehow expanded (a lot). Six months later my arm became infected after my third arm surgery and swelled up to the size of a football. Like the dislocation, the swelling placed pressure on all 3 of my major arm nerves. The pain was so intense my tears blinded me as I drove 1 1/2 hours to my doctor’s office. I was certain I would die from crashing my car on the drive.

Once again the instant pain relief from draining my arm with a very large needle and syringe was something I will never forget. As I laid in my hospital bed the next week I would now rate the infection as an 8,  surgery was still a 10, but the dislocation was now maybe a 6, and a broken collar bone at best a 4. This time my scale had not expanded but I was certainly adding vivid data points.

Everyone experiences pain differently; some endurance athletes even become addicted to a certain kind of pain and suffering. Through my injuries I learned that pain ratings are truly relative to my own previous experience.

It occurred to me that the question would be much more accurate if the doctor asked it in two parts: “Kerry, what is the worst pain that you have ever experienced?” Then, “How would you rate your current pain to that previous experience?” Pain needs context.

Conversely, patients could help their doctors by elaborating when asked the question. “Doc the worst pain in my life was x. Compared to that, today my pain is 1 to 10.”

When I entered physical therapy my therapists would ask nearly every day what my pain level was. I found the low end of the scale extremely hard to describe as what is the real difference between one, two, or three.  During therapy the pain would escalate quickly. They always told me to tell them when it hurt too much. I believed in the “no pain, no gain” theory so I never ever told them how much it hurt. One astute therapist learned when to stop by the degree of redness in my face. Not a very effective way to communicate about pain.

Today after two years of surgeries and therapy my arm works pretty well but I am learning a lot about low level chronic pain, which I am finding is even more difficult to deal with than short term high level pain.

Looking back, I wish that the English language had another dozen adjectives to describe the various kinds of pain we experience in life.

Kerry O’Connell is a construction executive. This article originally appeared on Engaging the Patient.

Why doctors are afraid of their patients 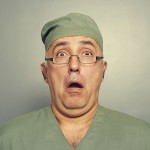