Baseball fans like me take great joy in studying the way general managers assemble their rosters.

The variations are fascinating. Some teams focus on pitching strength. Others go for speed or power-hitting. Each approach carries distinct advantages and disadvantages on the field.

That same level of variation and strategic decision-making applies to health plans, as well.

With the health care marketplaces reopening for enrollment on Nov. 15, anyone evaluating their coverage options should take a very close look at the different “rosters.”

That’s because more and more health plan “general managers” are assembling narrower networks of physicians and hospitals than in the past. And while these narrow networks can help lower premiums, they might also limit choice, access and potentially even quality.

In the past, insured Americans got their health care from one of two types of health plans: the “network” model and the integrated delivery system.

Under the network model, physicians and hospitals are generally reimbursed on a fee-for-service basis. Meaning, insurance companies reimburse network doctors and hospitals for each service they perform, including office visits, tests and procedures. When subscribers of this type of health plan become sick, they can visit any of the many doctors or hospitals in the network.

In contrast, the integrated delivery system consists of physicians who are part of a multi-specialty medical group. Instead of getting reimbursements from an insurance company based on services, medical groups are capitated or paid through some form of prospective payment. Individual physicians are often salaried and paid based on their quality and service scores.

This latter form of reimbursement is known as pay-for-value. Integrated systems tend to include fewer doctors than the larger networks. However, these doctors have been selected by clinicians in their specialty for their medical expertise and quality of training.

A third option: The narrow network

In 2014, health plans participating in the public exchanges introduced a somewhat different choice.

From a coverage and reimbursement perspective, “narrow networks” are structured much the same as the traditional fee-for-service model, but they offer a much smaller selection of physicians and hospitals.

McKinsey & Company reports that narrow networks include between 30 to 70 percent of all hospitals in the area participating. 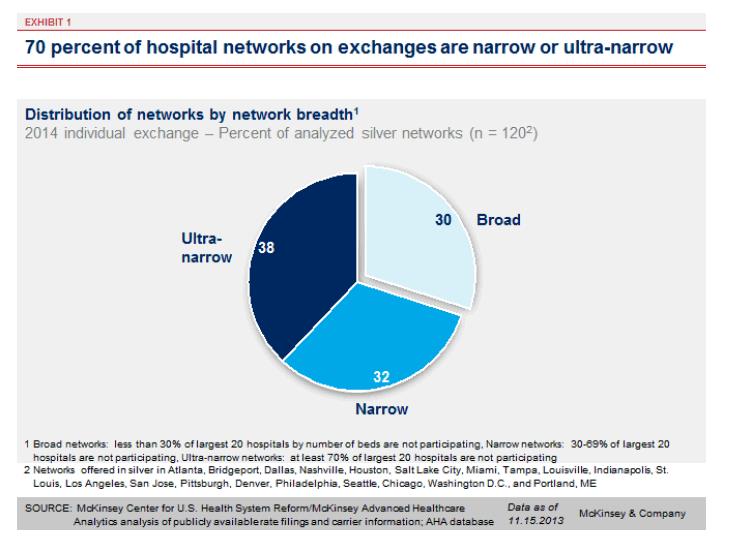 Narrowing the choice of in-network doctors and hospitals is designed to help insurance companies control costs and manage care.

Now that we get the gist of narrow network structure, let’s explore how people can choose their coverage.

Subscribers of the platinum and gold tiers pay higher premiums but have fewer out-of-pocket costs. Those who choose a silver or bronze option pay less up front and have more exposure to out-of-pocket expenses. It’s similar to choosing deductible options when buying car insurance.

In the past, some insurers offered low-priced options and kept their medical-loss ratios low by “cherry picking” relatively healthy members and “lemon dropping” individuals with pre-existing medical conditions.

And thus, the narrow network was born.

But many subscribers had difficulty identifying their network’s “roster” in the first year of the exchanges and faced a rude awakening. There was no way for them to know which doctors and hospitals had been dropped. They learned the hard way just how narrow their choice of doctors and hospitals was when they sought care.

In some states, patients faced with unexpected medical bills for newly out-of-network doctors were extremely disappointed in their experience. Some enrollees sued the insurance companies that failed to let them know.

And in the first year, some of the rosters offered through the narrow networks were not selected based on quality and service data. Instead, the list of doctors was created based on the prices they charged insurance companies and their willingness to accept steep reductions in fees.

It does not necessarily mean there is a problem with these physicians. It does, however, mean that it will be important for people to closely examine the full network roster before selecting a particular health plan.

How should you decide?

Similar to major league baseball, the quality of players on a health care team usually determines the results.

Some health care exchanges say they plan to include quality data on their websites in the future, allowing consumers to make more informed decisions. In California this fall, for example, the state’s insurance exchange “Covered California” will feature quality star ratings next to health plans as part of the site’s popular “shop and compare” tool, making it easier for consumers to use the ratings in selecting a plan.

For now, subscribers who believe they can figure out which physicians and hospitals provide the best care may prefer the traditional, broad network, fee-for-service model.

For those who’d rather see clinical experts to assemble their team for them (based on the training, quality performance and interpersonal skills of the players) an integrated, multi-specialty medical group may be the better choice.

And for those who care about the price of their monthly premiums above all else, a narrow network may be the right choice – assuming the price is right. But before making this selection, consumers should research exactly who is “on the team” and on what basis they were chosen.

Those who don’t may find themselves reciting this common baseball refrain: “Well, there’s always next year.”

I will build a practice, but I will also build a life

Nursing homes: Our society has chosen to see only darkness

Narrow networks on the health care exchanges: Can they survive?
5 comments