A few weeks ago an emergency room doctor called our infectious disease physician group concerning a patient who had returned from Liberia and was having nausea and vomiting. Several of the patient’s family members had died of Ebola.

As panic struck us, our decisive question was: When did he return from Liberia?

The Centers for Disease Control and Prevention guidelines for screening and isolating patients for possible Ebola infection are clear: Any person who is presenting with symptoms (which include fever, headache, vomiting and stomach pain) along with a history of travel to West African countries including Liberia, Guinea and Sierra Leone within 21 days of symptom onset.

To our relief, the patient had arrived in America three months earlier, so we reassured the ER physician that the risk for Ebola was virtually zero. But what if he had arrived 23 days ago? Would it have been prudent to let the patient go home from the emergency room with anti-nausea medication, or would it be better to quarantine and evaluate him for Ebola?

For me, a recent article in the New England Journal of Medicine detailing the first nine months of the 2014 epidemic in West Africa raises concern about the short, often-mentioned 21 post-exposure-day periods in the guidelines. In the journal’s study of 4,507 probable and confirmed cases, “approximately 95 percent of the case patients had symptom onset within 21 days of exposure.” If we do the math, this means that approximately 5 percent or 225 of the Ebola cases in West Africa had symptoms 21 days after exposure, as reported by the patient or caregiver.

In medicine for most illnesses we tolerate 95 percent certainty. I give antibiotics for a diabetic foot ulcer with a first line regimen which has 95 percent certainty of cure. This is appropriate because if my first treatment fails (which it will in 5 percent of cases), the patient’s life or limb is not threatened. However when I am treating a case of meningitis or sepsis, I use the most powerful antibiotics initially so that I am 99.9 percent certain that I do not miss antibiotic-resistant bacteria.

The level of certainty has to be tailored to the level of threat a disease poses. With Ebola’s 70 percent mortality rate and public health implications to health care workers and the general public, an exponential-fold higher level of certainty is necessary from the usual 95 percent.

On October 20, quarantine for many, including the family of Thomas Eric Duncan and the health workers who cared for him during his first ER visit, will end. Should we consider a longer quarantining period to increase the level of certainty that no contact has an incubation period greater than 21 days?

Charles Haas, professor at Drexel University, published a paper in PLOS Current Outbreaks that can help us delineate the probability of infection, based on the six Ebola epidemics. According to his model, 21 days after exposure the risk of acquiring Ebola is 0.1% to 12%. The risk reduces to 0.01% to 5% after 30 days and the risk is virtually zero after 40 days.

The problem with modeling is that the output data is only as good as the input data. Getting a history of possible date of exposure in a potential Ebola patient in a developing country during an epidemic is difficult — especially when data is not being obtained for research purposes. Also, patients often do not provide an accurate history because they may not recall the sequences of events or they may have wishful thinking, hoping they have long passed the time after exposure.

The Haas study alters my clinical decision making at the bedside for screening of patients for Ebola. So if the ER physician had told me that the patient had returned from Liberia 23 days or 30 days earlier, with confidence, I would have asked the patient to be placed under isolation and evaluated him for Ebola, overriding the guidelines.

But that’s for one patient. What if we have to decide on the duration of quarantine for hundreds of people who feel well and want to return to their daily routine? Keeping quarantine for a long time is not easy, as witnessed by NBC’s Nancy Snyderman, who broke her quarantine after her exposure to her cameraman with Ebola.

So what can we do? I believe we need to individualize the duration of quarantine based on exposure and risk of acquiring Ebola infection, just as I and many doctors individualize the decision for isolation based on patient’s history and its reliability.

While data are not available for Ebola, with most other viral infections, the greater the exposure inoculums (vomitus or blood touching the mucus membrane of health worker or family member during peak of illness) the shorter the incubation period, hence those with minor or minimal exposure may be more likely to show a longer incubation time.

Additionally, we can marry quarantine with technology using polymerase chain reaction, or PCR. At a cost of $60 to $200 the test looks for viral particles in the blood and amplifies them millions of folds, picking up most cases of Ebola patients who may still be asymptomatic. While not 100 percent foolproof, the PCR test increases the level of certainty in determining if a patient has an Ebola infection, which can ultimately lead to a more accurate decision on lifting the quarantine.

With so little known about the Ebola virus, as a public health decision, it may be prudent to extend the quarantine or observation period. Public fear and loss of confidence in the CDC may increase if a patient presents with Ebola symptoms on day 23 after exposure. We hope the Ebola virus does not throw us another curve ball in its debut appearance in America.

Instead of being hysterical about Ebola, respect it 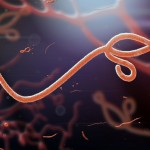