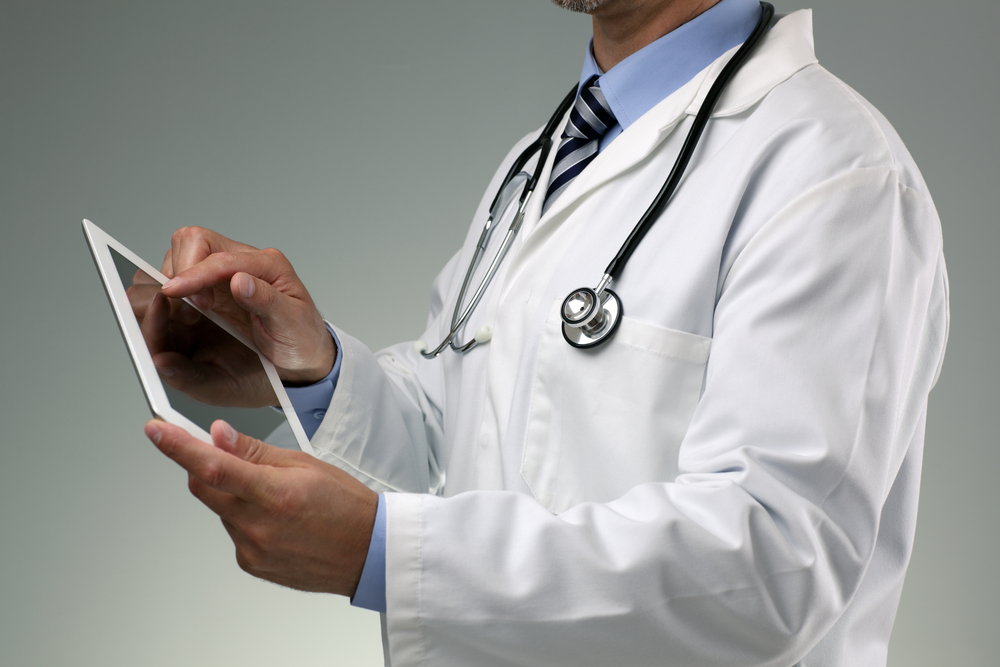 The Senate Appropriations Committee has defined a new transgression perpetrated in the committee’s expert opinion by vendors of certified EHRs, as well as “eligible hospitals or providers.” Since the committee has no data or evidence of any kind that this transgression is actually occurring, it requires the Office of the National Coordinator for Health Information Technology (ONC) to embark on a fishing expedition to locate all perpetrators of “information blocking” and devise a “comprehensive strategy on how to address the information blocking issue.” The committee is recommending that “ONC should take steps to decertify products that proactively block the sharing of information.” The Senate committee does not specify which information should be shared, but it unequivocally states that information blocking practices “frustrate congressional intent.”

Interoperability is the means by which computers communicate with each other. It is not necessarily the means by which people use computers to communicate. Lack of interoperability does not mean that patients cannot access their medical records, and it does not imply that physicians are unable to obtain pertinent information at the point of care. Interoperability means that communications between human beings are mediated by a computer that has the ability to parse, process, combine and use exchanged information in multiple ways. It therefore means that the information is formatted as structured and universally standardized atomic elements, translatable into identical 0 and 1 bits of electric current by all computers. Talking on the phone, faxing pieces of paper, exchanging electronic messages and documents, or sending data elements in a proprietary format, do not qualify as interoperability. There is no interoperability, unless all computers everywhere have a thorough “understanding” of everything people wish to say to each other.

Machine interoperability is being touted as the silver bullet in our quest to improve care coordination, and rightfully so. Interoperable computers are the ultimate population managers. There is no better way to ensure that people don’t fall through the cracks of an increasingly fragmented system where continuity of care is being replaced by electronic coordination of services. Computers that are interoperable are immensely better at “remembering” all the services that are needed and the dates when services are due for each individual patient. Computers can also generate reminders and alerts to make sure that everybody is adherent to recommended therapies, and keep track of results and outcomes, particularly for patients with chronic disease and multiple comorbidities. Proper care coordination can thus reduce complications, errors of omission, preventable hospital admissions and unnecessary readmissions, saving the system boatloads of wasted money. No wonder then that the United States Senate and practically all experts in the field are adamant that interoperability should be our number one priority.

The following assessment of financial waste in health care comes from the man who invented the triple aim and introduced the patient-centered concept into mainstream conversation, Dr. Donald Berwick, a staunch supporter of the Affordable Care Act who was chosen by the Obama administration to lead the Centers for Medicare and Medicaid Services (CMS), a physician who actually practiced medicine, and a New England liberal. 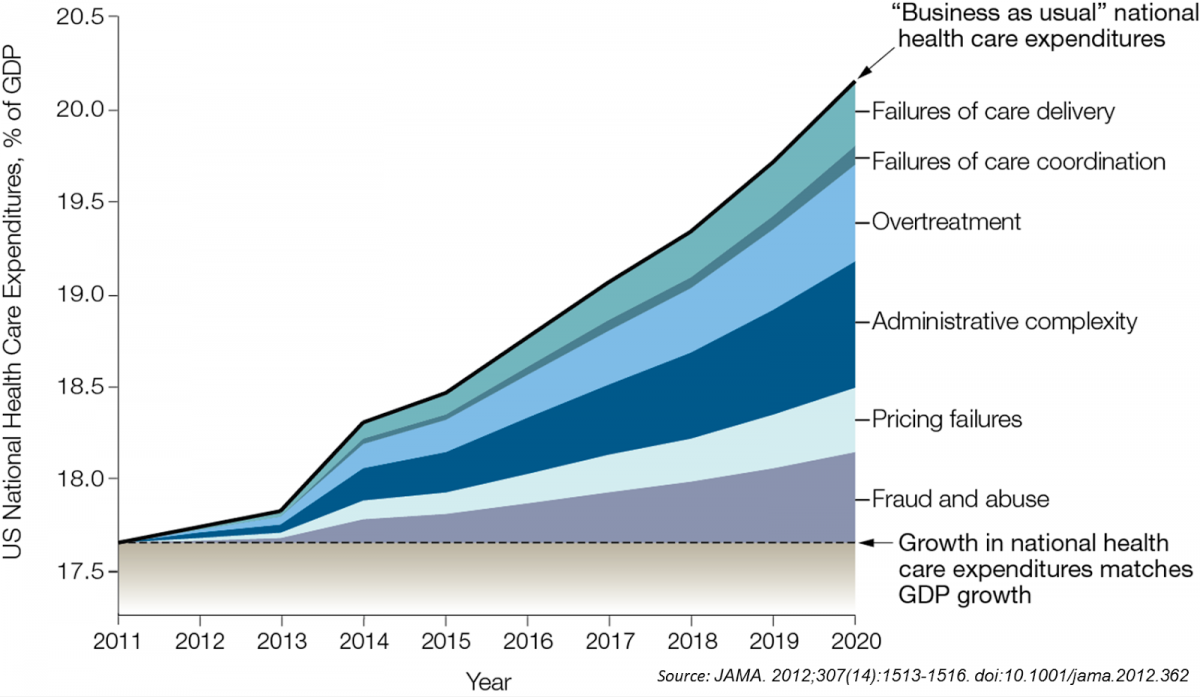 If you tilt your head to the left at just the right angle, and squint a little while looking at this graphic, you will notice the comparatively negligible waste created by failure to coordinate care.  You will also notice that the majority of wasted health care dollars have almost nothing to do with actual patient care, whether it is coordinated or not.

Nevertheless, care coordination and its managed care alter ego, provided by interoperable machines, has become the battle cry of health care reform. Hospital consolidation, accountable care organizations, vertical integration, narrow networks, the proliferation of managed care, particularly for those dually eligible for Medicare and Medicaid, bundled payments, incentives and team care, all proclaim their goal to be better care coordination. Hundreds of billions of dollars are flying around, in a dizzying triple aim dance led by the falsetto of the interoperability orchestra.  Interoperability, and the incessant regulatory deluge aimed at promoting the so called data liquidity necessary for clinical information to flow in a thousand directions, contributes almost nothing to reductions in five of Dr. Berwick’s six wedges of waste, and for administrative complexity, which is the biggest waste of all, it actually makes things infinitely worse.

So why are our government and the overwhelming majority of our industry obsessed with interoperability? Because uniformly standardized machine interoperability is the one prerequisite to the creation and accumulation of big data for health care in particular, and for all other surveillance purposes in general.  Once enough big data is generated and dutifully allowed to flow uninhibited to entities beyond traditional health care organizations and their old and tired legacy systems, the fresh ideas from innovative entrepreneurs will sweep health care off its feet and transform it into a lean and mean transparent, effective and efficient machine that keeps us all safe and healthy at a fraction of today’s costs, or something like that. And, knock on wood, even immortality is now a tangible option trickling down from deranged Silicon Valley billionaires.

Back on Earth, there are early indications of how this free-flowing big data business will actually work. Setting an example for one and all, Medicare has begun releasing huge datasets to the public. A good illustration is the recent release of its physician payment data. The headlines triggered by this liberating act were swift and abundant: “Medicare Millionaires Emerge in Data on Doctor Payments,” “Top Medicare Ripoff Doc Is Dominican,” “Political Ties of Top Billers for Medicare,” “Sliver of Medicare Doctors Get Big Share of Payouts,” “Medicare pays hundreds of millions to Maryland providers,” “Florida has most doctors with $3 million in Medicare claims,” “Millions paid to Medicare doctors in Memphis,” “Is your doctor one of the 340 in Texas to make more than $1 million from Medicare?” and my personal favorite, “Medicare Records Provide Tantalizing New Details Of Payments To Doctors,” plus thousands of more of the same.

Being tantalized is an integral part of being safe and healthy, and it seems that a good old fashioned witch-hunt is also highly recommended for rabble morale, not to mention the ad revenues generated by all this mindless click bait. Once interoperability is widespread and data flows freely, entrepreneurial companies may decide that it is in the public interest to be tantalized not only by millionaire doctors, but also by the million dollar babies who are feeding their habit. And since this is after all big data from certified EHRs, we can build very nifty HIPAA compliant databases to shed some light on the demographics of top health care spenders (e.g.,  “Millions Paid by Medicaid for Out of Wedlock Births in Mississippi,” “Sliver of Children Spend Big Share of Health Care Dollars,” “Retired Millionaires Deplete the Medicare Trust Fund,“ “Sexual Preferences of Top Spenders for Medicaid,” etc.).

If I may venture a guess though, wide scale interoperability is not blocked by antiquated moral or ethical concerns some of us may have. It is blocked by money. All serious EHR vendors are perfectly willing and fully capable of opening the database floodgates to release most clinical information out into the wilderness, but doing that costs lots of money. There are labor costs, hardware costs, maintenance costs, various certification costs, and practically no return on investment, and no other tangible benefits, for their clients or their clients’ patients. Industry captains, who beat the data liberation drums the loudest, charge small fortunes for interoperability, including transaction fees for every liberated medical record. Contrary to popular belief, interoperability is good for EHR vendors’ business, and it does not alleviate the so called “vendor lock in” problem one bit, which may explain why the most respected interoperability experts hail from the largest EHR companies.

So who are the true information blockers? You are. You, and all other people who are stubbornly refusing to pay EHR vendors for allowing you to collect irrelevant data, and for transferring these data to those who are creating a tantalizing new market for the personal information of your patients, are frustrating congressional intent. You should expect stiff penalties and punishments for noncompliance, because interoperability is not about technology or the sharing of pertinent clinical information at the point of care. Universal and comprehensive interoperability of machines is about the transfer of power and wealth, from patients and doctors, to large corporations.

Patient outcomes: It's time to account for socioeconomic factors

Do we really need soda companies to cut calories for us?

Who is blocking EMR interoperability? You are.
26 comments