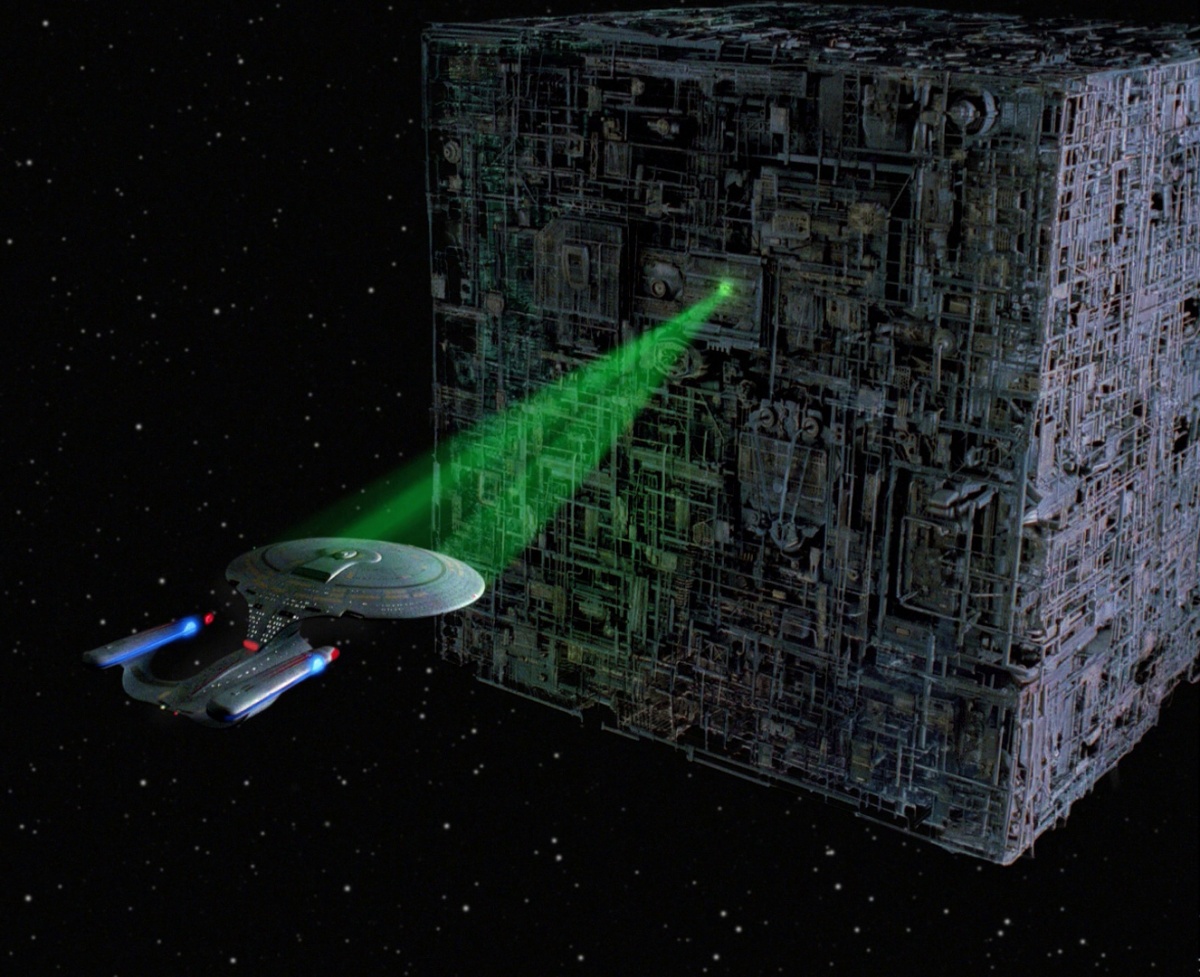 Fans of Star Trek: The Next Generation will recall that the most disturbing aliens encountered by the Federation were the Borg, a part-cyber, part human collective race that functioned as an integrated and cyber-connected whole that existed only for the good of the collective, rather than as distinct individuals with their own thoughts and personalities — much like honey bees work together as a collective for the protection of the queen and the survival of the colony.

When the Borg encountered a humanoid species, they would forcefully assimilate them and their technologies into the collective, or destroy them, preceded by only one warning:

“We are the Borg. Lower your shields and surrender your ships. We will add your biological and technological distinctiveness to our own. Your culture will adapt to service us. Resistance is futile.”

The Borg did not consider themselves to be evil though, because “the Borg only want to ‘raise the quality of life’ of the species they ‘assimilate.’”

I expect that many physicians in independent practices feel the same way as the unfortunate humans that encountered the Borg: They are under unrelenting pressure to be assimilated into hospital-owned or other large group practices, giving up their independence in the process, with the promise (of course!) that assimilation will  “raise their quality of life.”

But is assimilation the only option for independent practices?  Is resistance futile?

My answer: No to the first, and yes to the second.

Let me explain.  I believe that independent physician practices can survive, and even thrive, because they offer something valued by most patients: An ongoing relationship with a physician who lives in the community, and who knows them and their families.  A practice where, like Cheers, everyone knows your name — from the front office receptionist to the practice’s physician assistant or RN to the physicians themselves.

I don’t believe that patients want these practices and their physicians to be forcefully assimilated into large groups that may be located some distance from their homes, where when they arrive for an appointment they are forced to wait for a long time in an overcrowded waiting room, just take a number please, to be seen by someone — a nurse, or a PA, or maybe if they are lucky, a physician — who they never met before and won’t be around next time they need to be seen.

(Now, before I get angry comments about this characterization from ACP members in large group practices, I am not saying that this is how all or even most large groups operate — most provide excellent and personalized and attentive care, often in community-based practices — even though the individual physicians and have chosen to be part of a larger group.  And there are small practices where patients are treated brusquely by inattentive staff and physicians.  My point is that if assimilation into a larger group means the loss of a personal relationship with a physician they know and trust, many patients will be opposed.)

And while big is not always better, smaller independent physician practices should explore ways to share information systems, data, and even risk with other independent practices, achieving economies of scale without losing their independence.

Independent physician practices do not have to be assimilated, then, but they have to have to be willing to embrace changes that will better position them to be successful without losing their values, their relationships with their patients, and their independence.

For the unfortunate victims of the Borg, assimilation meant losing everything they valued — their independence, their creativity, their individualism, their personal relationships, their values.  But Star Trek’s Federation learns how to prevail against the Borg, not by becoming part of them, or defeating them militarily, but by showing that an independent Federation of free people, voluntarily working together for the public good, is a better model of survival then a cyborg collective that snuffs out innovation and creativity.  With the right support, I believe that independent physician practices, provided that they are willing to embrace innovation on their own terms, will be able to show that they offer something of extraordinary value to patients and payers, allowing them to survive and even thrive without losing their independence.

Quit smoking: It takes a community to spread the word

Dissociate EMRs from billing. Here's how to do it.