I recently did a tally.  Since starting my locums adventure last year, and going to full-time locums in January, I’ve worked in a grand total of 11 emergency departments.  Let me qualify that for the occasional visitor to my blog.  I decided to do this for purposes of flexibility, finances and a much needed change of scenery.  Not because I’m a problem physician, or unable to do the work in a “real” job.  I say that to emphasize the fact that at 21 years into my career, I am a keen and qualified observer of life in emergency medicine; in fact, of life in medicine in general. It’s one of the things I write about most.  And I do so because there are so many regular physicians out there with grave concerns and real problems, for whom there is no voice at all.  I try to be that voice.

And one of the things the doctors are crying out over is electronic medical records, or EMR.  These are systems that hospitals impose upon physicians in order to capture extra federal dollars via meaningful use. Or in order to mine the data so that they can squeeze every more blood from the turnip of paying patients and insurers.  Or, they are used to track every motion, every action so that administrators can have sufficient flow charts, spread sheets and other data with which to send “bad boy” letters to clinicians reminding them to work faster or better.  (And which allow various mid-level managers something to do all day without having to actually care for patients or provide intrinsic value to the hospital.)

Mind you, EMRs were already on their way, but now the administrative pressure is high.  Sadly, the systems are very, very bad indeed.  It is said that use of an EMR, versus paper charts or dictation, typically reduces physician productivity by about 30% right out of the box.  It is also noted that now, young physicians in training spend more and more time at keyboards and less and less time looking at that pesky throwback to ancient times, the human patient.  (How dare they not be pixelated!)

The sound of medicine these days is the sound of the keyboard. It is so prevalent at times that it nearly causes me to have a headache and nausea.  Tap, tap, tap, day and night.  We dash to the patient and we come back and spend the lion’s share of our time using the one class of all our classes that mattered most; typing or keyboarding.

This is not because it generates a good chart.  In fact, most systems generate terrible charts.  Charts full of clipped sentences and check box histories and exams that read worse than the worst prose.  A patient encounter can generally be summarized in well composed paragraph.  It’s just harder to mine the data from said writing.  So modern EMR charts are inundated with time-stamps and worthless information, much of it put in the chart by nurses also forced to document everything from the patient’s pain scale to when they last fluffed his pillow or inquired as to his general state of happiness.  All too often, the reason for the visit is buried in nutritional assessments and statements about whether or not they feel safe at home, or the bed-rails are up.  (I have actually witnessed charts on patients with a laceration in which the laceration or its location were nowhere described.)

The whole thing is demoralizing.  It is my experience that physicians and nurses routinely stay an hour or two later than their shift time, just to complete charting that they couldn’t do while trying to see human beings in a timely and competent manner.  In the process, they develop repetitive stress injuries like carpal tunnel syndrome.  I have had right shoulder pain on several occasions after prolonged charting.  Of course, this extra time does not in any way result in extra hourly compensation. It is a requirement added on the already too many requirements of life in modern emergency departments, imposed by those whose jobs end at 3 or 5 and who do not spend their days logging in, logging out and trying to click all the right boxes while around them, people may well be dying.  But I digress.

Having used a number of EMR systems, I can say that some are horrendous.  These are the systems that require at least four to eight introductory hours of classroom time.  These are the systems that ultimately take users weeks to fully comprehend and employ.  These leave users frustrated and angry; sometimes tearful as they simply can’t be used in a manner commensurate with the pace of the actual medicine being practiced.

Why are cumbersome systems used?  Many reasons, no doubt.  Perhaps because the hospital or hospital system has been heavily courted by a large company that convinced them that it was an “industry standard,”  that “everyone who is anyone is using it.” Certainly not, in general, because the end-user (physicians and nurses) found it simple and effective; that metric seems almost laughable these days. Doctors and nurses are commoditized quantities who will do as they’re told or else.  Period.

The cumbersome systems are also, often, connected with the large corporations that run health care.  They own or are affiliated with EMRs and those systems, with their built in data capture and billing systems, are forced upon the system’s providers to maximize reimbursement. ( One more reason, in my estimation, that a simple laceration costs $1,000 in most emergency departments.)

I am not naming bad systems; not yet.  But I am going to name two systems that are excellent.  I am not an owner, shareholder or employee of either.  I simply want to illustrate the difference.  I have used systems that required an IT nurse educator to sit by my side for at least an entire 8 or 10 hour shift; and still I wasn’t clear.  And by way of disclaimer, I realize that even the systems I’m naming are businesses, dedicated to both documentation and generating revenue.

Having said that, I repeat that I have used systems that I understood and could use competently in 30 minutes.  Why aren’t these more popular?  Because if we want physicians to use EMR, and we want those physicians to do their jobs effectively and quickly, we need to simplify and streamline.

Which ones, you ask?  First of all, EPOWERdoc.  I have used this at two facilities and found it to be delightfully simple, with a very gentle learning curve.  I learned, and used it, within about 15 minutes.  The doctor leaving night shift showed it to me and I used it seamlessly for the next 12 hours and from then on at that, and another, facility.

Second, T system.  I have used paper T-sheets and they’re nice and simple.  Personally, given my bad penmanship, I prefer the electronic version.  When I first used it in June of this year, I was met by an IT educator as I walked into the shift.  In 20 minutes, I understood it and smiled as I enjoyed its intuitive design for the next 10 hours.

I suspect that if physicians had any control of this situation, the majority would use the simplest system possible. As it stands, however, we don’t.

Pity, because the demands on emergency departments grow more intense every day.  The stresses are high and the resources are stretched. The last thing anyone needs is a complicated, time-intensive, soul-sucking computer program.

What we need is simplicity and compassion for providers.

Is that too much to ask? 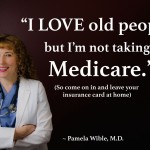 Why bad EMRs are forced on physicians
4 comments