He was a 24-year-old African American man with no history of medical or eye problems.   On an ordinary Thursday evening at 8 p.m., he arrived into the emergency department complaining of a sudden loss of vision in both eyes.

“He couldn’t see a thing on our chart.  Vitals are fine, pupils are equal and reactive, and the rest of the neuro exam is unremarkable,” the emergency room attending briefly explained.  “Can you see him?”

As the first year ophthalmology resident on call that night, I certainly could.

Not a half hour later, I had whisked my new patient to the eye clinic, settled him in the exam chair, and asked him to read the chart with one eye covered.

“E.”  He correctly stated the 20/400 letter after just a moment’s hesitation.

We got down to 20/200 in each eye, and then he struggled.  I didn’t expect such a poor visual acuity from a young and otherwise healthy man.  I confirmed the normal pupils and as I swung the slit lamp before him, I wondered what pathologies I would find.

But there were none.  His eyes appeared perfectly healthy, if not slightly myopic.  We were discouraged from performing refractions on emergency visits, but I wanted to ascertain a diagnosis, so I went ahead.

After we corrected a moderate amount of myopia, he easily read the 20/20 line with each eye.   I turned on the room light and lifted the phoropter away from his face.  He looked at me with a sheepish smile and shrugged.

“The good news is your eyes look healthy, you just need a simple pair of glasses,” I told him.

I paused.  He looked at his hands.

“But,” I continued. “Something tells me you already knew that.”

He sighed.  “You got me.  I knew I needed glasses.  I’ve needed them for a while.  So much for sudden loss of vision.  Sorry, doc.”  He chuckled.  “But I lost my insurance.  It didn’t cover glasses anyway, and glasses are so expensive.  And eye exams are so expensive.  So I figured if I came to the emergency room, maybe I could get both for free.”

My heart sank.  It’s a common misconception that emergency care is free of cost.  I explained to him that emergency rooms are mandated to provide emergency care regardless of a person’s ability to pay, but patients will often still get billed. His little white lie would likely turn into a big invoice.

It was hard to blame him.  Most glasses were ridiculously expensive.   One company controls a large majority of the frame manufacturing and prescription glasses retail in the United States, and sets prices at an enormous markup.   It explains why one can get simple over the counter plus lenses, or reading glasses, relatively cheaply, but simple minus lenses to correct myopia are only available by prescription and therefore cost several orders of magnitude greater.

I gave my patient a spectacle prescription and pointed him in the direction of a few new online spectacle retailers, who were reliable and much more affordable.

As I signed the patient back over to the emergency room for discharge, the attending told me he would do his best to minimize the patient’s bill.  We were lucky to avoid the CT scan, and we agreed to discuss the decision to image ophthalmologic cases before the tests were actually ordered.  “Communicating,” the attending surmised.  “Patient to doctor, doctor to patient, doctor to doctor.  It goes a long way, doesn’t it?”

I had to agree.

Sriranjani Padmanabhan is an ophthalmology resident. 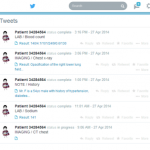 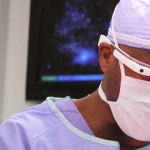