“It is immoral that the wealthiest nation on the planet does not provide affordable, high-quality health care to all of its citizens. Despite being the only global ‘superpower’ still standing, we trail much of the industrialized world in life expectancy, infant mortality, and countless other indicators of health. Until we fix our broken, prohibitively expensive delivery system, things will only get worse.”

I’m not sure if anyone has used those exact words, but the sentiments expressed therein have served as the impetus behind health policy reform in this country for years. And droves of “thought leaders” have stepped forward to make ours a healthier, more righteous nation — health insurance exchanges, EMR technologies, ACOs, quality strategies, rating systems, patient satisfaction surveys, pay-for-performance reimbursement models, and price transparency initiatives, together costing billions of dollars, have been the result. These same “disruptive innovators” and “creative destroyers” have also asserted that we must emulate other countries’ health care systems if we are to march toward a more equitable, salubrious national future and assume our rightful place atop the global health hierarchy.

The problem, of course, is that medical care, along with all of the other activities we collectively refer to as “health care,” has a rather negligible impact on aggregate health indicators such as life expectancy. In fact, we’ve known for quite some time that a nation’s health status is primarily a function of its socioeconomic idiosyncrasies and, to a lesser extent, the genetic composition of its citizenry. Similarly, how well or poorly a society treats its sickest, most vulnerable citizens is more a reflection of its collective values than it is a measure of its health care system’s efficacy or administrative efficiency.

Stated differently, “health” and “health care” are entirely unrelated concepts. Health is largely about life, about unique individuals, their daily struggles, their jobs, their mortgages, their lifestyles. It is neither attained nor lost in a doctor’s office, and it cannot be isolated from the culture that yields it or be easily reproduced in a different environment. Spending billions to introduce new layers of administrative refuse between physicians and patients, or to implement untested or foreign delivery models, is therefore useless. Those approaches are as ineffectual as attempting to improve education by incorporating Asian décor in our schools or investing more heavily in principals’ offices than classrooms.

So if improved health is the goal, and health is primarily a function of other phenomena, why focus almost exclusively on health care policy? Well, she’s currently the sexiest, most powerful woman in the room, and she’s got very deep pockets to boot. Sure, physicians know she lacks substance. But politicians are drawn to her because she controls millions of votes. And “thought leaders” flock to her because she’s financially promiscuous: “No health care experience? No medical training? No problem, stud. Here’s a billion bucks — go throw some shit against the wall and see what sticks. Show those doctors how it’s done.”

More importantly, however, health care delivery has increasingly become a convenient scapegoat in our society. We blame it for anything we find distasteful (e.g. death, inequality, drug addiction, racism). A health care system, though, is merely a mirror that reflects a society’s existing moral identity, not a womb within which that identity is conceived. Make no mistake — health care is important. But spending exorbitant amounts of money restructuring the administrative components of a system that does not cause, and cannot fix, the problems we wish to address is a waste of valuable resources. So what are some of the problems we should be addressing?

Take a look at the graph below which shows the median wealth and life expectancy at birth in ten countries: 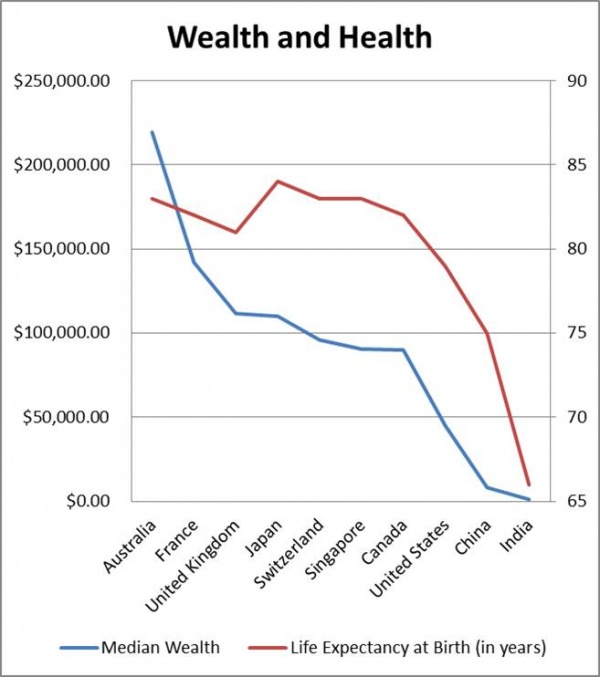 We already know that health status is closely linked to wealth — the wealthier you are, the healthier you tend to be — so the slope of these lines is no surprise. But viewing the data this way helps us understand why we have relatively poor life expectancy despite being the most affluent nation on Earth. Because of the staggering inequality in the United States, our median wealth ($44,911) is much closer to that of China ($8,023) or India ($1,040) than it is to the average median wealth of the other seven countries represented on the graph ($122,830).

Until we address the wealth inequality in this country, we will continue to die younger than the citizens of other nations, no matter how many patient satisfaction surveys we develop. If improved health is really the goal, focusing exclusively or disproportionately on doctors and hospitals isn’t an option.

So why not just pick another country’s health care system and “copy” it? Well, take a look at the graph below which shows the level of Geocultural Complexity ℠ in the same ten countries. 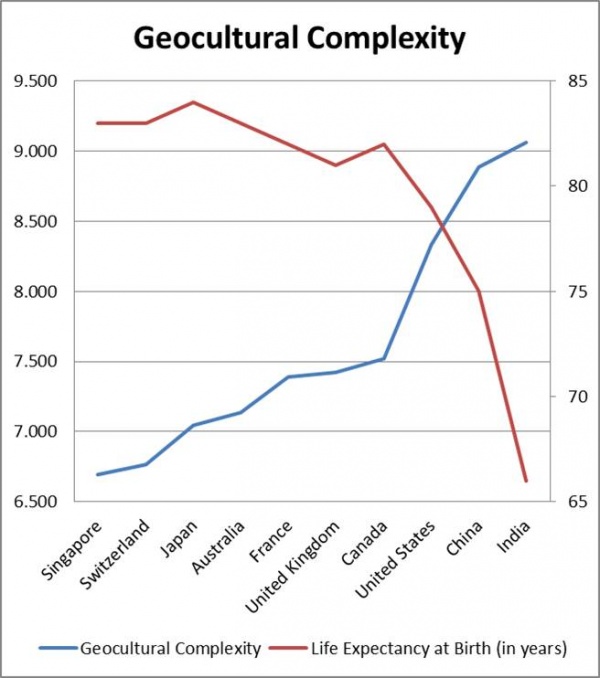 Geocultural Complexity ℠ is a scale that attempts to quantify the degree to which a country’s geography, demographics, and culture pose a challenge to health care delivery. It incorporates numerous national characteristics such as land area, population size, age distribution, diet quality, inactivity levels, geographic distribution (rural vs. urban), linguistic diversity (LDI), and several other criteria.

The purpose of the graph, though, is not to prove that there is a strong correlation between this measure of complexity and life expectancy (though there may, in fact, be one — as complexity increases, life expectancy seems to decrease). Rather, the goal is simply to show that each country poses distinct challenges. And if you really think about it, that makes perfect sense.

The point is simply that every country is unique. And a health care system does not exist in a vacuum — it is born of, and inextricably linked to, a nation’s distinct political, cultural, geographic, and economic environments. “Copying” Switzerland’s financing model but not its restrictions on insurance company profit, emulating Japan’s delivery model but not its citizens’ diet habits, or adopting Singapore’s entire health care system but not itsstate capitalism will not make us any healthier. It’s just not that simple.

If we want to improve our nation’s health, we need to rethink our strategy. First, contrary to what our thought leaders tell us, we need to focus on making ours the best, most efficient “sick care” system in the world. Marketing tactics and political doublespeak aside, health care is, first and foremost, about caring for the ill, about providing them with low-cost, high-quality medical care when and where they need it.

Much of what we now label “patient-centered” is ineffective, overly expensive administrative clutter. And prevention is certainly important, but in many cases, it is best addressed outside the costly confines of a health care system. Paradoxically, the more we “study” health care delivery and attempt to “retool” it to solve problems it does not cause and cannot prevent, the more cost and waste we introduce. Let’s focus on cleaning up the clutter, removing administrative barriers, and allowing physicians to do what they were trained to do.

Next, rather than spending billions trying to make health care something it isn’t, we need to redirect those resources toward reducing inequality and improving education, two true determinants of health. Finally, and perhaps most importantly, we need to decide who we are as a nation. Let’s focus on building a health care system that is right for us, one that suits our culture, incorporates our values, respects our freedoms, and meets our needs, rather than simply adopting one designed to solve another country’s problems.

Luis Collar is a physician who blogs at Sapphire Equinox. He is the author of A Quiet Death.

A passion for family-centered care