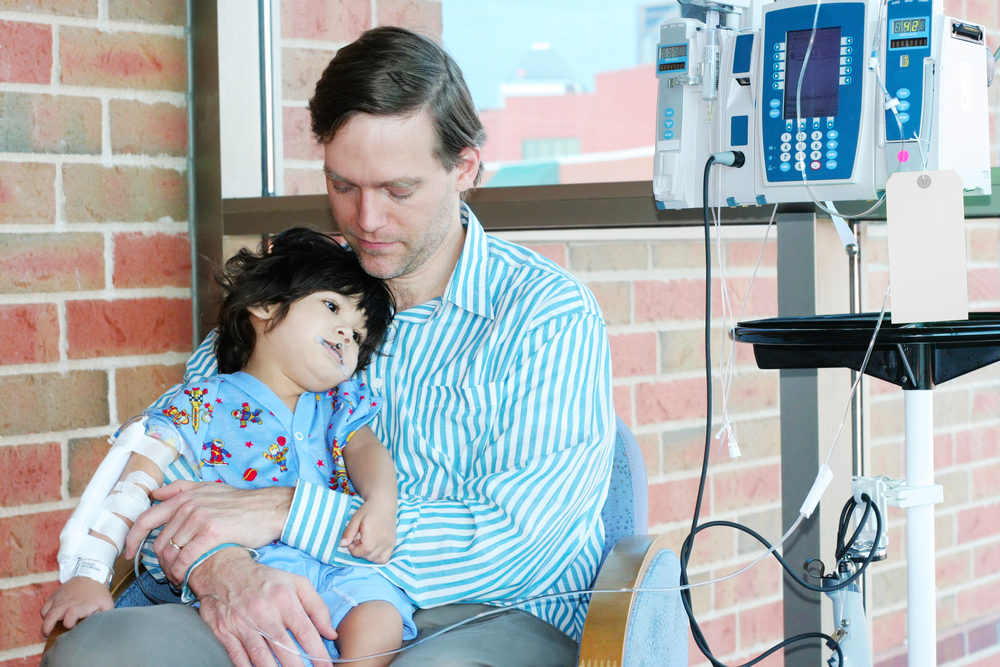 When I was a little girl, my dad was my hero. He was strong and brave, and it only took his presence to make me feel safe and secure. I thought he understood everything there was to know in the world. I believed he could solve any problem, slay any dragon, protect me from all harm.

That’s the best thing about dads, really. You get that feeling settled deep down inside of you that lets you know you can rest easy because he’s got you. He’s never going to let you go. I guess it’s probably one of the best things about being a dad, too. When you look at your child, you know that she really believes you hung the moon. And for her, you would.

Perhaps that’s one of the reasons it’s so hard for dads whose children suffer with serious illnesses. He is supposed to be the protector, the warrior who goes into battle unafraid. But when his child gets sick, in some ways he feels he’s already lost the battle. He couldn’t protect his child from harm. He couldn’t prevent the pain. He doesn’t know how to fix it or make it better. And he is afraid.

It’s a heavy burden these dads carry around every day. And yet, when a child is sick, Dad is probably the most overlooked of the family. We neglect to look a little deeper into his eyes, behind the tough exterior to see the broken man who is struggling and in pain. We don’t know the questions to ask him, and he doesn’t know how to share the grief so deep that it defies all explanation.

When kids get sick, we have a much better understanding of the traditional role that moms often take on as the primary caretaker, but dads tend to be less understood. Even though we live in an era where gender roles are much less defined in our families, sometimes the illness of a child forces us into them. One parent has to stay at the hospital with the sick child while the other goes to work each day to pay the bills, care for their other children, make meals and drive carpool. When families are forced to divide and conquer in this way, sometimes the roles dads serve are forgotten. Worse, we judge them without knowing the whole story.

I think of how heavy these burdens must be, and my heart aches. I think of how much heavier it must be for those who are parenting in a single-parent household, and it aches even more. These dads (and the moms, too) are really living extraordinary lives and giving of themselves far more than our eyes can see.

On this Father’s Day, take the time to remember these dads, the ones who have silently and selflessly given their all for their families. Look them in the eyes, give them a pat on the back, and tell them they are doing a good job.

They are doing the most important work of their lives. Make sure they know it.

The EHR should work for us, not us for it