I recently got back from a brief trip to Florida. I went down there to celebrate my mother’s 85th birthday. As you might expect, her social circle has shrunk in recent years, but she did get a number of cards and calls from friends and family members. The cards were on display in her kitchen, and a few calls came in while I was there. One in particular pointed out some of the many things wrong with medicine these days.

The caller was a cousin of mine whose elderly father is one of the few remaining friends my mother sees on a regular basis. He and my father grew up together, and our families were always close. Since my father died, and his wife passed, he and my mother go out to dinner on a weekly basis.

My mother had told me that he was having back trouble, so when his daughter called my mother with birthday greetings, she and I spoke and I asked after her father. She sounded a bit frustrated with him, and said that she had told him to “just get an MRI already” to see what was wrong, since it was clear, she said, that “nobody was going to operate on someone his age.”

I did not challenge her suggestion, but I couldn’t for the life of me figure out what an MRI would add to his management, especiallys ince, as she pointed out, he was not a surgical candidate (and his symptoms, by her account, were neither disabling nor accompanied by neurological signs). I just chalked it up to another example of consumer-driven demand, the perfect companion to fee-for-service imaging in a well-insured population, and pretty typical of what we know to be one of the causes of overutilization of imaging studies. Sad, but hardly reportable.

The really sad part came when I called her father, since I wanted to see how he was coping with his back pain. He told me that he was actually feeling much better, and told me that his back had not ever been the problem, but rather nagging aches in his calves. His physician had prescribed hydrocodone — really, for an 88-year-old? — which lessened the pain, but made him feel woozy (big surprise there).

What really made the difference, he said, was something that seemed crazy, and he wanted my opinion. Turns out he loves grapefruit, and eats them daily, but he read someplace that it might be interacting with his lovastatin, so he cut out the grapefruit and his leg pain got better. I totally endorsed his theory and told him that he would probably be better off stopping the lovastatin and continuing his grapefruit, but he thought I was kidding (I was not!).

So here’s the sad part. An 88-year-old man who loves grapefruit is now deprived of it, so that he can continue taking a medication of dubious value in his age/risk profile, prescribed by a physician who prescribed a narcotic to someone with an adverse drug reaction. At least he stopped the narcotic before he had a complication from that.

What happened to talking to patients? The patient was offering the diagnosis, and his doctor still missed it.

What is wrong with this picture?

Are safe harbors the answer to fixing medical malpractice? 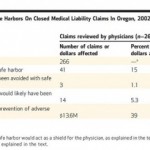 A requiem for handwritten admitting orders

The patient offered a diagnosis, and the doctor missed it
12 comments