In an article entitled, ”Why the ER admits too many patients,” Dr. Michael Kirsch tries to explain that emergency department admissions are inflated due to emergency physicians acting in their own self-interest.  Many emergency physicians have read this and taken offense, feeling that his assertions point unfair blame on them for a significant portion of excesses in medical care and costs.  I share this visceral reaction in part, but such a reaction blurs some very important points worth examining.  Let’s give the benefit of the doubt for a moment, that the author may in fact be pointing the blame not at emergency physicians personally, but at a broken system instead.

First, he claims that due to fears of potential lawsuits, emergency physicians when in doubt, cautiously err on the side of admitting a patient and ordering tests, rather than discharging them with minimal work up.  How any emergency physician can deny that this happens baffles me, as almost every one I’ve ever known will say in private they think about, and are motivated to avoid the threat of lawsuits (except for possibly a few in the handful of states with strong tort reform).  Physician surveys seem to support this, with at least one showing greater than 90% of physicians across multiple specialties admitting to such.  This speaks to the greater issue of defensive medicine and the need for tort reform, and should not be seen as an indictment of emergency physicians.  Tort reform is an issue where the American people just plain need to decide.  Do they want to keep their cake uncut, or to eat it?  You absolutely cannot cling to the pipe dream of reducing unnecessary medical testing and expensive overly-cautious admissions while holding true to the good old-fashioned American past time of suing the pants off of a doctor who sends a patient home, only to have something unexpected go wrong.

You cannot have both.   For the most part, and in most states in the land, the American people, their elected politicians and the plaintiff’s attorneys that support them, have already decided in favor of option 2.  The right to sue has always come out on top (in most states) and there’s no sign that’s about to change any time soon.  To those who will respond with “science,” “data” and articles claiming the threat of medical malpractice doesn’t alter doctors’ practices or inflate health care costs, don’t bother.  Most physicians are not interested in hearing evidence or data to show oxygen isn’t needed for breathing, or that 2+2 isn’t 4, either.

Secondly, it is claimed that doctors may be pressured by their hospital to admit patients to make more money.  But for whom?  There is nothing that personally profits an emergency physician by choosing to admit a patient over discharging one.  Whether a patient is admitted or not, doesn’t change the physician fee, or level of service billed, at all.  It’s simply not part of the criteria.  It certainly may make a difference to a hospital administrator’s bottom line, which could lead a hospital to threaten a physician’s job over not admitting enough patients, or to provide improper and unwelcome pressure to do the same.  At least one pair of emergency physicians have alleged exactly this, filing suit saying their “hospitals … offered them illegal kickbacks to order unnecessary tests and admit more patients to increase corporate revenues.”

Is this an isolated case, and a fluke?  Or are these the only two amongst many physicians that were either brave enough or fed up enough, to blow the whistle?  Could this be the tip of an iceberg pointing towards a growing trend?

My suspicion is that as the current trend of hospitals buying physician practices and employing physicians directly to co-monopolizing the health care system along with the government and insurance industry, that such instances will become more common.  Either way, none this personally benefits an emergency physician.  In fact, such pressures are toxic towards physician morale and are on the list of things that lead many physicians to steer young people away from becoming physicians.  Emergency physicians only make more money by either, working more hours or seeing more patients.  Otherwise, they suffer (along with more importantly, their patients) from being caught in the middle of the rest of these twisted pressures and motivations imposed by others.  This needs to be made 100% clear.

The author goes on to assert, that unnecessary admissions would be stopped suddenly and dramatically, if we could just tweak the system such that “hospitals are penalized financially for hospitalizing folks who should have been sent home,” and then “we will witness the miracle of a runaway train performing a U-turn on the tracks.”  Where is the proof, that this would do anything more than just add another layer of distorted pressures and motivations, twisting the vice tighter on emergency physicians, with the sword of frivolous medical malpractice accusations on one side if a sick patient is sent home, and on the other side, the hot iron of threats from profit-conscious hospital administrators facing the threat of financial penalties if too many patients are admitted?

This seems to me, that opposed to having “miraculous” results, it would do nothing more than add another layer of unintended consequences to an already twisted storm of conflicts of interests, distracting physicians from making the best decisions for their patients based on their medical knowledge, judgment, textbooks and training.

In conclusion, the author of this article brings up some very good issues and concerns.  It is unclear the extent to which he points the blame specifically at emergency physicians themselves. To the extent that he does so, I disagree vehemently.  It is my suspicion however, that he points the blame more at our system with its perverse pressures, as evidenced by his comment, “If I were an ER physician, I would behave similarly facing the same pressures that they do.”

Emergency physicians are a lighting rod at the center of a broken storm of a system, and suffer from it much (second only to the patients), with little to gain from its perverse pressures and coercions.  Under the current conditions I would say they do the most with the least, and as a group, do a phenomenal job in the unenviable, overwhelming and thankless circumstances they frequently find themselves.  Perhaps by understanding and acknowledging this, physicians between specialties, patients and policy makers can find common ground to battle the threats distorting, twisting and re-defining our profession and our patients’ care.

What if homeopathy invaded the ER?  This. 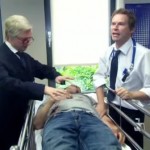 Emergency physicians are blamed for a broken health system
1 comments