An article published recently in the American Cancer Society journal CA: A Journal for Clinicians received a lot of media attention. The report showed dramatic declines in the rate of people being diagnosed with colorectal cancer, as well as decreases in the rates of colorectal cancer deaths over the past number of years.

But the press didn’t say much about the fact that not everyone has benefited from the progress we have made in the prevention, early detection, and improved treatment for colorectal cancer. It is a sad but very real commentary on how we approach health care in this country that African Americans have not benefited equally from this progress in treating a cancer that for many people can be prevented or effectively treated when found before it spreads to other parts of the body.

As a nation, I believe it is incumbent that we address this glaring health disparity. To do less is unacceptable.

Here are some examples from the research report:

It’s tempting to dismiss these statistics by claiming there is something inherently different about colorectal cancer in blacks compared to whites. But the evidence does not support that claim. Decades ago, there was no difference in survival between blacks and whites. And more recently, a commitment by the state of Delaware to provide equal screening and treatment to all for colorectal cancer has resulted in an elimination of these differences in less than a decade. So don’t use ethnicity as an excuse for poor outcomes. It is clearly due to something that we can fix.

There are probably a number of factors that contribute to these findings. As noted in the report, some of those include a generally lower socioeconomic access in the black community, which translates into less access to care and is associated with a higher risk of colorectal cancer and death. Behavioral risk factors and obesity account for approximately 40% of the socioeconomic disparity in colorectal cancer according to the authors. However, even within the same socioeconomic group, the death rates are much higher in blacks. So that doesn’t explain the whole story.

They also note that black patients when treated with adjuvant chemotherapy to prevent locally advanced colon cancer from recurring have fewer side effects and equal benefit compared to whites.

Screening-or the absence of same-probably plays a significant role. Colorectal cancer screening has the potential to find a colon polyp that may turn into a cancer, or find a cancer at an early stage meaning better survival. A recent report suggests that 42% of the difference in the frequency of colorectal cancer diagnoses in blacks compared to whites is related to differences in screening. People who live in high poverty areas don’t have the same access to screening compared to those who live elsewhere.

The authors of the report write:

The disparate pattern (of colorectal cancer mortality) is likely the product of a complex interplay of social and environmental factors, including the delayed diffusion of information about screening and disparities in the management of care and receipt of treatment. It has been established that 54% of the racial disparity in colorectal cancer mortality is due to the combined effects of differences in screening and stage specific survival.

So while we are celebrating the declines in colorectal cancer incidence and deaths, we must not ignore or dismiss the fact that not everyone in this country is sharing in that incredible success. When equal opportunity for prevention, early detection and appropriate treatment is available, the disparity disappears. That’s means we are failing too many people who don’t have the knowledge or the access to effective systems of care that can significantly reduce deaths from colorectal cancer whether it means more participation in screening, or getting appropriate medical care if diagnosed with colorectal cancer.

We could reduce deaths from this cancer significantly if we did what we already know: for everyone. As we move forward with a new nationwide emphasis on achieving that goal, let’s redouble our efforts to make certain that we can all participate in this incredibly valuable public health initiative. We should accept nothing less than success in making this happen.

What paying it forward in health care looks like 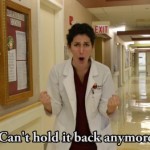