Health care reform is a reality.  The ACA and its associated mandates have forever changed the landscape of medicine in the U.S. today.  The Obama administration touts the goals of reform as providing affordable, cost effective, high quality care for all Americans.  Certainly these are noble and lofty goals: But have we completely missed the mark?

Today, many remain uninsured and the majority that have signed up for the exchanges are simply those who have lost their health care coverage from other providers.  Health care costs in the U.S. remain above those of all other industrialized countries while physician salaries continue to fall.  Even though the U.S. spends more dollars per capita on health care than any other country on earth, our outcomes, when compared to other nations, remain mediocre at best.

What about cost?  Who is actually delivering care?

Over the last 30 years, hospital administrators and CEOs have grown by 2500% while physicians have grown by only a modest amount.  In fact, according to the American Academy of Family Practice, there must be a 25% increase in primary care doctors over the next 10 years in order to keep pace with demand.  Multiple independent surveys (published by the AAMC) indicate a significant shortfall of all types of physicians nationally by the year 2020.  As administrators and insurance company executives grow, hospital staff and services continue to be cut: Nurses and doctors are asked to care for more patients with fewer resources.  Executives continue to tout savings within their organizations and boards award these administrators with enormous financial bonuses. 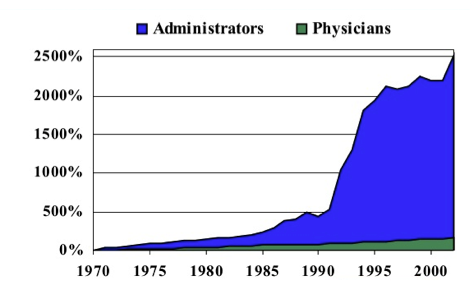 Where are the doctors in all of this?

The short answer is that physicians are caring for patients and managing the piles of paperwork that the government and other health care organizations and executives have created for them.  Doctors are now consumed with checking boxes, implementing EMRs and transitioning to a new coding system for billing — all while seeing increasing patient loads and meeting increasingly steep clinical demands.

Recently in the New York Times, Elisabeth Rosenthal penned an article that spells out what many physicians have known for a very long time: The administrators and hospitals are the high wage earners — not the doctors.  As the numbers of administrators continues to rise exponentially, many independent physicians and physician groups are being driven to integrate with or leave practice altogether in order to remain fiscally viable.  According the the Times, the salaries of many administrators and CEOs (in both the hospitals and the insurance industry) are outpacing salaries of both general practice physicians, surgeons and even most specialists.

Astronomical wages such as those earned by Aetna’s CEO (total package over 36 million dollars) and others are a big contributing factor to the trillions of dollars that we spend on health care each year.  According to the Times, health care administrative costs make up nearly 30% of the total U.S. health care bill.  Obviously, large corporations and CEOs will argue that these wages are necessary to attract the best and brightest executives to the health care industry.  What is there to attract the best and brightest scientists to medicine?  Certainly altruism is a big part of what physicians are about but economic realities must still come into play when bright young students are choosing careers (while accumulating graduate and professional school debt at record paces).

Why then does it seem as though physicians are the only target for reform?

That answer is simple: Hospital administrators and insurance company CEOs are well trained businessmen (and women) with MBAs from prestigious schools.  They understand politics and how to effectively lobby.  They have been actively involved in reform and have participated in discussions on Capitol Hill rather than watch the change happen around them.  When costs are cut from the health care expenditures, they have made erudite moves: They have worked effectively to isolate themselves and their institutions from the cuts that are affecting the rest of the industry.   While reimbursement for office visits and procedures falls to less than 50% through many of the exchanges and other government based programs such as Medicare and Medicaid, CEOs and hospital administrators continue to financially outpace their colleagues in other sectors of business.

As physicians, we must continue to focus on our patients and their well being.  Individually, we must continue to provide outstanding, efficient, quality care to those who depend on us every single day.  As a group, however, doctors must begin to work harder to influence those in Washington for change.  While health care reform is essential and must be accomplished in a fiscally responsible way, it is my hope that those in a position to effect change will recognize that we must begin to better regulate and limit those in CEO and administrative positions in both the insurance and hospital industries.

Just as we reduce the numbers of nurses on the floor to care for patients in order to save health care dollars, maybe we should eliminate a few VPs with fancy offices on the top floors of our hospitals.  Which one do you think will positively impact patients more: fewer nurses or fewer dark suits? 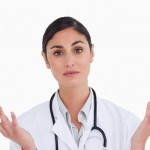 The salaries of health executives: What can doctors do?
60 comments