I was working side-by-side with a Kenyan ENT doctor at his hospital in Eldoret, Kenya. My wife, Kathi, and I were part of a team of head and neck surgeons organized by Indiana University spending two weeks working with Kenyan ENT surgeons to help them build confidence to perform operations independently. In rapid sequence, we were seeing dozens of patients who had signed up to be examined and hoping to have surgery for tumors or other problems of the head and neck.

An elderly man sat slumped in the ENT clinic exam chair with his clothes hanging loosely from his body. His eyes were sunken and he winced when he swallowed.

“How long has he been like this?” I asked. “When did he start losing weight?”

The family members conferred in Swahili. “He hasn’t been able to eat for about six months. He has too much pain in his mouth.”

I flipped on my headlight and spoke to the son. “Please ask him to open up. I want to see inside.”

His son translated and the man’s mouth opened, revealing a deep crater where his tongue had once been. There was no movement of the remaining tissues. The ulcer was growing into the lower jaw. 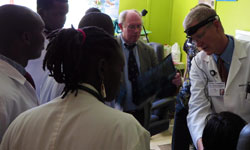 “We do not have a biopsy,” I said, “but this is likely a very large cancer. It has been there for a long time.” I ran my fingers up and down the sides of his neck feeling for enlarged lymph nodes. Several hard masses lay just deep to the muscles. “The cancer has spread to many of the lymph nodes, as well.” Given the number of nodes involved, I realized that there was a strong probability that the cancer had already traveled throughout his body.

“In addition,” said the son, he is also HIV positive.”

I turned to my colleague. “This is a very advanced cancer. Even without HIV, we would not have much to offer in the States.”

“Really?” he asked me. “How about a flap of some kind? “Couldn’t you take out the cancer and put in a flap?”

I thought about his question. The kind of surgery he mentioned takes a large team and twelve or more hours of OR time. Recovery is prolonged and requires specialized nursing care and rehabilitation. The radiation therapy treatment he would need after surgery is only available six hours away in either Nairobi or Kampala and would take several weeks. I could not imagine that he would be able to tolerate the treatment, much less survive the surgery.

“No,” I said. “In the States, we would probably have a feeding tube placed and consider some chemotherapy once he was a bit stronger.”

“Does that help?” my Kenyan colleague asked.

My Kenyan colleague turned to the family and spoke to them in Swahili for a couple of minutes. The elderly man nodded and slowly got up and walked back to the crowded hallway.

“What did you tell them?” I asked.

“We will arrange for a meeting with the palliative team. We will not try to treat his cancer.”

I was surprised that there was a palliative team to send him to but, reflecting later, realized that Kenya and most of sub-Saharan Africa was devastated by HIV/AIDS just a few years ago. This medical center became adept at offering comfort when it could not offer treatment.

The exam chair was soon filled by another patient. And then another. Over the course of several hours, we examined adults and children with enormous cancers, huge thyroid goiters, and challenging problems. Many of them were scheduled for surgery in the upcoming days but some, like the elderly man with the tongue mass, were turned away because we had nothing to offer.

“Thank you for coming,” I said to each of them.

“Asante, Doctor,” they often replied. “Thank you for being here today.”

Negative results from clinical trials need to be reported

Powerless to treat a complicated cancer case in Kenya
4 comments