Research and development is critical to battling disease.  Now, more than ever, technology can rapidly impact a patient and their disease process in a very positive way.  The process of developing a new drug or device is expensive and can be very time consuming.  As government funding for projects continues to decline, more funding is coming from private sponsorship according to a recent New York Times piece.

Another critical source of research funding comes from the pharmaceutical and medical device industries. Partnerships with industry can provide additional opportunities for meaningful research.  When handled objectively and with clearly stated endpoints, these studies can produce impactful results.  However, as reported in both the New York Times and the Wall Street Journal (discussing two separate issues), these relationships can also begin to blur lines between academic endeavors, patient care and profit — often calling in to question the validity of the research.

In order to stay current and provide patients with the best available therapies, physicians dedicate many hours to reading new publications that evaluate novel treatments in peer reviewed journals or hearing about new therapies when data is presented at national academic meetings.  When data is compelling, most clinicians will change practice in order to incorporate what is perceived to be a superior treatment into our therapeutic regimen.

Transparency of research — whether conducted through government sponsored grants or through industry funded projects — is critical to providing patients with the best available treatments.  The evaluation of the drug must be complete and we must be allowed to see all of the steps in the development process.  However, if there is more data “behind the curtain” we may not be getting an absolutely accurate picture of the safety and efficacy of the new therapy.  Lack of clarity in medicine when treating patients can result in unintended harm.

In the Wall Street Journal, author Hester Plumridge reports on groundbreaking European legislation concerning the regulation of pharmaceutical companies and their drug trials. The European Parliament is voting next month to consider requiring all data for all trials conducted in pharmaceutical research to be released for public consumption.   For years, pharmaceutical makers have been able to conduct clinical trials without reporting negative results if they choose not to do so.

Most drug companies conduct numerous trials in an effort to develop new (and profitable) drugs to treat disease.  The process of drug development is tedious and can take many years to go from concept, to bench to clinical trials — and eventually to market in the US via FDA approval.  Now, for the first time, European legislators are working to approve a measure that would require all studies to be publicly reported within a year of completion — irrespective of the outcome.  Obviously, publicly held corporations are less than enthusiastic about publishing failures and disappointing stockholders.  However, there well documented reports of negative data that has been withheld from review and buried within emails and confidential paperwork within commercial organizations.  Many of these have led to litigation in the US and abroad.

Data from 2009 indicates that only around 50% of all trials conducted by pharmaceutical companies is actually published and released for review by the scientific community.  According to the Wall Street Journal, only 41% of over 600 studies sponsored by the National Institutes of Health (NIH) were published within 3 years of completion.  Many clinicians are concerned that the motivation for profit may ultimately do patients harm.  Withholding negative results related to a drug in development may result in incomplete data being presented to regulatory agencies such as the FDA — for example if a drug has one positive trial and two others that showed less benefit statistically, the drug could be approved without examining all of the evidence.  This approval may lead physicians to believe the drug is more effective than it actually is.

A well known example from the recent past involved pharmaceutical giant Merck and their drug Vioxx — in a well reported case, the drug maker was accused of failing to report cardiovascular related deaths, burying negative data and hiding risks to patients in order to gain approval and profit — ultimately they withdrew the drug in 2004 and have suffered significant legal consequences since then.

We must continue to innovate.  As the health care industry continues to scramble to control costs in the era of the Affordable Care Act (ACA) we must continue to put patients first.  Scientists and clinicians — whether in academia, private practice as well as in industry — must continue to work together and  disclose all data concerning the development of novel therapies.  It is essential to maintain absolute transparency when dealing with human lives.  Industry is a business and will always be driven by intense pressure to develop the next billion dollar revenue “blockbuster” drug — but we must be allowed access to the data surrounding the failures as well as the successes in order to protect the lives of the very patients we strive to heal.

Companies such as Johnson and Johnson as well as GlaxoSmithKline are beginning to lead the way in terms of openness and data publication.  Healthy partnerships between clinicians interested in performing rigorous research and industry leaders who are interested in innovation are key to success going forward.  It is my hope that the European legislation passes next month and that the United States will follow the lead of our European colleagues.

Powerless to treat a complicated cancer case in Kenya 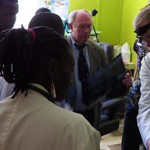 The rise of ADHD diagnoses in young mothers

Negative results from clinical trials need to be reported
2 comments