In his article, “Going to the Moon in Health Care: Medicine’s Big Hairy Audacious Goal (BHAG),” Emanuel argues that contemporary medicine is in need of vision, an overarching, aspirational goal “like going to the moon that can make an organization — or a nation — stretch beyond what it thought was possible to achieve remarkable things.”

He asserts that medicine has no such vision today. In the past, medicine’s BHAG was universal coverage, but now, he suggests, that’s passé.

We strongly disagree. Universal coverage remains a “Big Hairy Ambitious Goal,” especially in view of official estimates that our nation will still have 31 million uninsured people in 2024.

One has to wonder: When Emanuel argues that the goal of universal care “was not transformative for the U.S. health system,” is he speaking of corporate interests, such as the insurance industry? Clearly he does not mean physicians, a majority of whom now support government action to establish national health insurance, which would assure truly universal coverage.

Offering his own candidate for a winning BHAG, Emanuel proposes the financial goal of capping health care cost increases relative to the GDP, or in his words, “By 2020, per capita health care costs will increase no more than gross domestic product (GDP) + 0%.”

Cost control is indeed a worthy and urgent goal, given that economists are unanimous in predicting that health care costs will continue to rise under the Affordable Care Act. But the remedies that Emanuel has traditionally prescribed for this problem fall far short of what is needed.

In point of fact, a single-payer, government-funded system would be the easiest way to control health care costs — and it would also achieve the appropriate BHAG of universal coverage.

A single payer universal insurance system would control costs by:

Obamacare cannot lead to universal coverage. By maintaining the insurance industry’s role as a middleman, it will serve to ensure that health care costs cannot be reined in without draconian restrictions on needed care.

Emanuel rightly suggests that reining in costs will require focusing on outpatient management of patients with chronic conditions. However, the biggest obstacle to this is inadequate access due to uninsurance and underinsurance, not lack of technological tracking of physiologic indicators.

Both access to care and quality improvement would be much easier in a single-payer system.

Emanuel has reframed the crisis in the U.S. health care system as one of cost instead of the approximately 100 million Americans who lack health insurance or have insurance that does not enable appropriate care, leading to many thousands of deaths per year. We suggest that elimination of this travesty is the most important BHAG for physicians and that the solution is a single-payer system.

The surge of physician membership in Congress 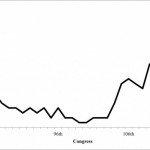 What spending time with critically ill patients taught me