As reviewed in many other sources, the relative underinvestment of resources in primary care in the U.S. has a great deal to do with the fact that we spend far more on health services than anywhere else in the world but rank near the back of the pack in key health metrics such as life expectancy, infant mortality, and disability compared to other high-income countries. Although economic inequality, lack of insurance coverage, and shrinking public health budgets are also part of the problem, I’d argue that diverting dollars from redundant multi-million dollar proton beam facilities to provide a patient-centered medical home for every American would have positive effects on population health.

Even though I feel that the U.S. has a lot to learn from other countries about building infrastructure to support high-quality primary care, it was still hard for me to get my head around the premise of an Atlantic headline that caught my eye earlier this year: “Rwanda’s Historic Health Recovery: What the U.S. Might Learn.”

Like most Americans who have never traveled there, I suspect, my impressions of Rwanda have been strongly influenced by popular dramatizations of the 1994 genocide such as the movie “Hotel Rwanda” and Immaculee Ilibagiza’s memoir Left to Tell. I had a difficult time imagining how any semblance of a functioning health system could have emerged even two decades later, much less a system that would have something to teach the U.S.

But a recent BMJ article by Paul Farmer and colleagues documented impressive gains in Rwandan life expectancy, led by declines in morbidity and mortality from tuberculosis, HIV, and malaria that resulted not only from investments in lifesaving drugs but in preventive and primary care. 93% of Rwandan girls have received the complete HPV vaccine series to prevent cervical cancer, compared to only 33% of eligible U.S. girls in 2012.

Here’s the thing, though: the foot soldiers in the Rwandan primary care revolution aren’t doctors. In fact, there were only 625 practicing physicians in the entire country in 2011. (According to a report published in the same year, Washington, DC alone has about 3,000.) How, then, has Rwanda been able to staff its network of community health cancers and reach out to its eleven million people, many of whom are so poor that they can’t afford the national health insurance premium of $2 per person? (That’s right, 2 dollars for an entire year. According to the Kaiser Family Foundation, the average monthly individual premium for generally healthy persons in 2010 was $215, or just over $2500 per year.)

They do it primarily by relying on community health workers, trusted local residents who receive a minimum of basic medical training and are then integrated into more comprehensive primary care teams. As described further in a BMC Health Services Research article by the group Partners in Health:

Each district is served by a network of community health workers (CHWs) — three per village — offering health education, basic preventive and curative services, and family planning. CHWs are supported by local health centers, which serve approximately 20,000 people and are staffed by nurses, most of whom have a secondary school education level. Health centers provide vaccinations, reproductive and child health services, acute care, and diagnosis and treatment of HIV, tuberculosis, and malaria. District hospitals, staffed in part by 10-15 generalist physicians, provide more advanced care, including basic surgical services, such as cesarean sections. 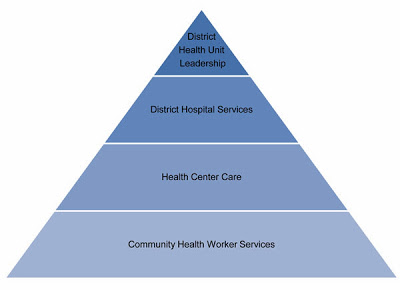 The lesson to take home isn’t that the U.S. can get away with training fewer primary care physicians than it already does. Indeed, Rwanda has every intention of training more doctors with assistance from other countries, including the U.S. What’s important is the pyramidal structure of their health system, with primary care at the base and more specialized care at the apex. If you took the U.S. physician workforce, which consists of about 70% specialists and 30% generalists, and mapped it to a similar structure, it would look more like this (apologies for my poor graphical skills): 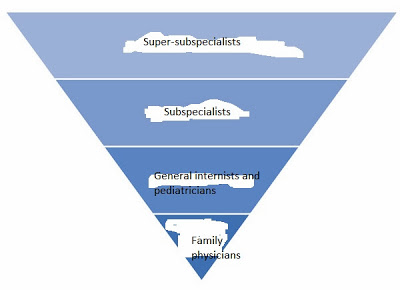 At the top, you have the super sub-specialists, who are experts on a single narrow spectrum of diseases confined to one organ system (e.g., hepatologists). Lower down are the ordinary specialists, such as gastroenterologists, cardiologists, and pulmonologists, whose expertise is limited to a single organ system and age group (e.g., adults). Still lower are generalists whose scope of practice is limited by age group. Finally, at the bottom, are the family physicians, the only type of physician whose scope is not limited by age, gender, or organ system.

The problem with this upside-down pyramid is that it’s inherently unstable. In Washington, DC, it’s sometimes easier for a patient with musculoskeletal low back pain to get an appointment with a spine surgeon or for a patient with panic attacks see a cardiologist than it is to find a family physician. You can get a same-day MRI for any number of problems that probably don’t require any imaging at all. Such a health system is inefficient and wasteful at best, harmful at worst, and destined to get the extremely poor results it does.

Standardize drug names and reduce the risk of medication errors

The personal costs of a living donor liver transplantation

Rwanda provides primary care lessons we can learn from
8 comments