It is pretty easy to be against Obamacare these days.

The federal government can’t come up with a working website to help people buy health insurance. The president misled people about whether they could hold onto their old insurance plans. And come next tax day, the least popular provision of the Affordable Care Act — the individual mandate — will be implemented for the first time.

Lost amidst all this controversy is the very strong likelihood that once Obamacare is fully implemented, and the disastrous Healthcare.gov website is functioning properly, the law will mean health insurance for millions of previously uninsured Americans.

And the people most likely to benefit from this law, according to a recent study, are blacks and Hispanics who not only have higher rates of uninsurance, but also frequently demonstrate greater need for medical care.

Which raises a question: is it racist to oppose the Obamacare efforts to increase health insurance in the United States?

The authors of the study point out that “not only are Hispanics and Blacks more likely to be uninsured [than whites], they also report worse health at most ages.” This partly explains why African-Americans have shorter life expectancy than Caucasians, and spend more of their adult years in poor health. In fact, the authors have an analysis illustrating the chance of going without health insurance according to age, race and ethnicity, based on data from 2008, before Obamacare was passed into law: 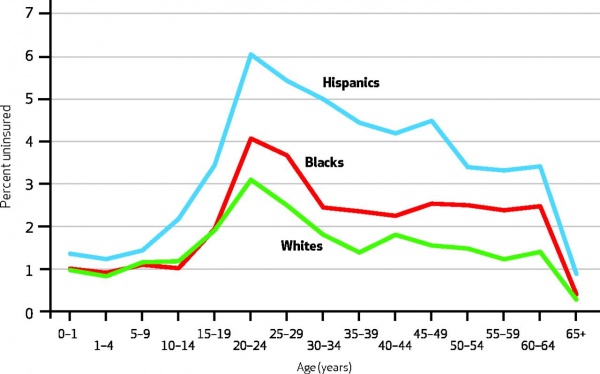 This picture reminds us that a major goal of Obamacare was to reduce unjust disparities in access to healthcare, access that can mean the difference between pursuing versus not being able to pursue one’s life goals. I understand people’s concerns about creating an expensive new government “entitlement.” I know why many of my politically conservative friends and relatives are suspicious about federal efforts to reform something as massive and complex as the US healthcare system. Indeed, the ridiculously incompetent launch of Healthcare.gov confirms many of these suspicions.

But as a physician, I cannot stand the thought that we allow people to suffer needlessly for lack of access to affordable healthcare. Having practiced medicine in the VA health care system from 20 years, I have seen the benefits of providing decent Americans with solid healthcare coverage.

I also understand the concerns of my politically liberal friends who criticize Obamacare for not pushing us into a single payer system, and instead relying upon private insurance companies to help solve the problem. It is very likely that “Medicare for all” could have been launched much more smoothly than the health insurance exchanges which we are trying to get running now.

But as a political moderate, and also as someone who has read extensively about the history of health reform efforts in the United States, I understand why the Democrats tried to work within the system we have, rather than impose a politically untenable single-payer system that never would have come into being. No politician who values her chance at re-election would vote to eliminate a whole industry, like the health insurance industry. Health care reform must always operate within the possible.

Now back to the question I pose in the title of this post: given that Obamacare will help blacks and Hispanics more than other segments of the American population, is it racist to oppose the law?

Nevertheless, people who oppose the law for these other, more legitimate, reasons need to at least recognize that efforts to thwart the law, if they succeed, will disproportionately harm blacks and Hispanics. That is what is so disturbing about the many Republican efforts to repeal The Affordable Care Act without coming up with a legitimate alternative that offers all Americans decent and affordable health insurance. I am not saying that alternative plans do not exist. I’m just saying they have not been the focus of most repeal efforts.

To oppose the Affordable Care Act without coming up with a way of benefiting the neediest people among us — I have a hard time respecting that.

Unlike mechanics, doctors have been denied the basic logic of futility

Is it racist to oppose Obamacare?
31 comments