Obamacare is working quite well, in some places, for quite a large number of people.  But you wouldn’t know that from the constant media drumbeat about the problems with the healthcare.gov enrollment portal and the relatively small (fewer than 6%) of the population whose individual insurance policies have to be replaced because they don’t meet the law’s benefits and ratings standards.

Now, before I get a rash of comments about how I can be so naïve about the problems with the Obamacare launch (I know, I will probably get them anyway), let me state from the outset that it is inexcusable that the administration launched an enrollment website that clearly was not ready.   It is completely inexcusable that a toxic combination of poor management, politics, under-performing contractors, and an apparent complete lack of transparency and accountability resulted in such a chaotic launch.  It is also clear that the president’s promise — “if you like your health plan, you can keep it” — was false.

The website problems, the cancellations, and Obama’s broken promise have led to weeks of negative news stories about Obamacare.  Support for Obamacare has fallen as result, although most Americans do not want it repealed.

Some have pointed to the rollout problems as evidence that Obamacare is fundamentally doomed because, as Bill O’Reilly claims, “the federal government is not capable of running the health care system.”

But the fact is that Obamacare already is working as it is supposed to in many states.  Just look at California and Kentucky.  California is a “blue” (reliably Democratic) state that is so large that it often is a national trendsetter, although it also is the state with the biggest numbers of uninsured behind Texas.  Kentucky is a small, poor, southern state that votes “red” (reliably Republican) in presidential elections, although it has a conservative Democratic governor and legislature.  They couldn’t be more different, except when it comes to the ACA: both states are fully on board with Obamacare, and both are having very promising initial success in signing people up.

Kaiser Health News reports that as of November 19, 80,000 people had signed up for coverage in California’s ACA marketplace, and nearly 23% were between the ages of 18 and 34, which “more or less matches their makeup statewide.”

Kentucky’s rollout also is going smoothly.  The Washington Post published a striking account of the poor, rural Kentuckians who are signing up in droves for ACA coverage, and what it means for them and their families. “If the health-care law is having a troubled rollout across the country, Kentucky — and Breathitt County in particular — shows what can happen in a place where things are working as the law’s supporters envisioned,” writes Post reporter Stephanie McCrummen.  She tells us about Courtney Lively, “who has been signing people up since the exchanges opened in early October.”  Lively told her the reporter that, “people have been ‘pouring into’ her office” and “one woman cried when she was told she qualified for Medicaid under the new law.”

But it isn’t just California and Kentucky where Obamacare enrollment is picking up.  The fourteen states running their own marketplaces are reporting an “enrollment surge,” doubling enrollment to about 150,000 from 79,000, according to state and federal statistics.

So if Obamacare is fundamentally unworkable, as it critics claim, then how can it be working in California, Kentucky and most of the other 12 states that are running their own ACA marketplaces?  And if it isn’t working so well, so far, in the remainder that are being funneled through the troubled website, isn’t that at least partly the fault of the governors of those states that chose not to set up their own marketplaces, leaving it to the feds to do the job for them?  And if the federal government fundamentally is incapable of running a health care system, then how do we account for the fact that it has been successfully running Medicare for 38 years now, and very few Americans (even die-hard conservatives) are in favor of ending government-run Medicare as we know it?

It would take rose-colored glasses to not see that the rollout of the federal government’s  incompetence in rolling out the web portal has been nothing short of disastrous.  But one would have to be blinded by ideology to not see that Obamacare is working the way it is supposed to in California, Kentucky and many other states, signing up tens of thousands of people who otherwise would be without affordable health insurance coverage.

With apologies to New York City and Frank Sinatra, if Obamacare can make it there (in California and Kentucky), it can make it anywhere.  Once the feds get that darned website fixed, that is.

What happens to medicine when it has no heroes?

I can’t always cure, but I can always care 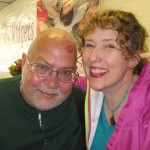 Where Obamacare is working well
38 comments