As a practicing primary care doctor, I very much enjoy my career choice. I’m fortunate enough to be in a large multispecialty practice that is collegial and forward thinking. If I was in a smaller practice like other colleagues, I would not quite feel the same. Yet concern about how to make primary care attractive for both future doctors and those currently in practice has been something I’ve been occupied with since 2010. It is simply about lowering panel size? Though that may help, the answer is more complex than that. In this post and a future post, I ask that question and propose a framework on how primary care can be better and how physician leaders might best address the problem.

In 2006, my medical group transitioned to an electronic medical record (EMR). Interestingly, nothing changed on the amount of time doctors spent in the office. After becoming more facile with the EMR, those doctors who left soon after the last patient continued to do so, those who left 60 to 90 minutes later did the same, and those who stayed hours later did as well. Those who stayed later on the EMR were the same group who stayed later when we had paper charts. Surprised?

At the same time over the past decade, our medical group has been actively reducing our patient panel size by hiring more primary care doctors. Doctors who stayed later on the EMR were also the same group that stayed later even after lowering our patient panel size. If doctors didn’t mind staying late and if it didn’t interfere with their work-life balance, then this would not be an issue. Yet, would there be an opportunity to make their professional lives better? Is fixing primary care more difficult than simply lowering panel size? At what point might lowering panel size do little to improve professional satisfaction or even become problematic?

Malcolm Gladwell tackles this question, not around panel size, but around school classroom size. He notes in his book David and Goliath that:

… Virtually everywhere in the world, parents and policymakers take it for granted that smaller classes are better classes.

… There used to be as many as twenty-five students in a classroom at Shepaug Valley [Connecticut]. Now that number is sometimes as low as fifteen. That means students at Shepaug get far more individual attention from their teacher than before, and common sense says that the more attention children get from their teacher, the better their learning experience will be. Students at the new, intimate Shepaug Valley ought to be doing better at school than students at the old crowded Shepaug— right?

… The economist Caroline Hoxby has done just that, looking at every elementary school in the state of Connecticut, and here’s what she found: Nothing! “There are many studies that say they can’t find a statistically significant effect of some policy change,” Hoxby says. “That doesn’t mean that there wasn’t an effect. It just means that they couldn’t find it in the data. In this study, I found estimates that are very precisely estimated around the point zero. I got a precise zero. In other words, there is no effect [of lowering classroom sizes. As an example Gladwell refers to a review of 5th grader class size at the same school, same teacher, same textbooks from 1993 to 2005, which ranged from 10 to 23].”

… When Hoxby says that her study found nothing, what she means is that she could find no real benefit to making classes smaller in that medium range. Somewhere between Israel [with a class size between 38 and 40] and Connecticut, in other words, the effects of class size move along the curve to the flat middle— where adding resources to the classroom stops translating into a better experience for children.

In other words, there is a point where reduction of class size is not better. In fact, if lower than a certain number the performance of the class is actually worse.

Gladwell notes this phenomenon as an inverted-U curve. 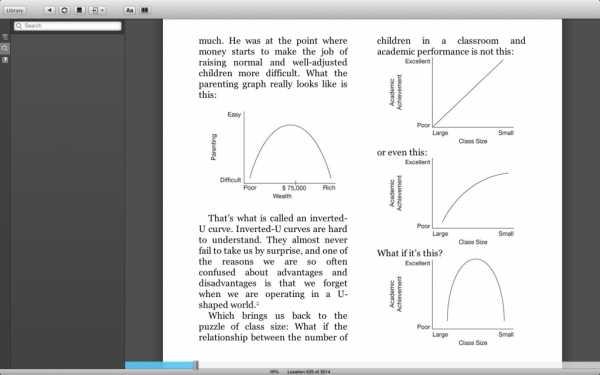 … a smaller classroom translates to a better outcome only if teachers change their teaching style when given a lower workload. And what the evidence suggests is that in this midrange, teachers don’t necessarily do that. They just work less. This is only human nature.

Imagine that you are a doctor and you suddenly learn that you’ll see twenty patients on a Friday afternoon instead of twenty-five, while getting paid the same. Would you respond by spending more time with each patient? Or would you simply leave at six-thirty instead of seven-thirty and have dinner with your kids?

Does the primary care panel size issue fit an inverted-U shaped curve? At what point does panel size too low become an issue?

Will a personalized DNA report ever be commonly ordered?