If you remember the 1950s you probably remember the terror of polio. Polio, short for poliomyelitis, is a disease caused by a virus which can cause severe inflammation of the spinal cord. Though most infected people have no symptoms, a small fraction of patients are left with permanent paralysis and deformities. The disease is sometimes fatal. In the US, the 1952 polio epidemic killed over 3,000 people and left over 20,000 with some paralysis.

The isolation of the polio virus and the development of effective vaccines still stand among the greatest achievements in public health. After widespread use of the polio vaccines the number of cases in the US dropped precipitously. Polio was eliminated from the US in 1979, from the Western Hemisphere in 1994, and from Europe in 2002.

In the last month polio has resurfaced in a country that is in no position to manage an outbreak: Syria. This is the first polio outbreak in Syria since 1999. Ten cases have been confirmed and twelve others are suspected. At least ten children have become paralyzed. Prior to the war vaccination rates were quite high, but in the last two and a half years the civil war has collapsed the nation’s public health system. The war has also displaced more than nine million people, placing populations in camps with poor sanitation and widespread malnutrition — perfect breeding grounds for communicable diseases. The World Health Organization is scrambling to vaccinate over a million children in Syria and six neighboring countries. Obviously such a massive immunization campaign will be extremely challenging during a war.

The medical lesson of this tragedy is about herd immunity. Since no vaccine is perfectly effective, and since no community (or “herd”) has every individual vaccinated, there are always a small number of people in any “herd” who are not immune. They stay healthy because the vast number of people that they come into contact with are immune and can’t infect them. So they are protected by the rest of the herd.

But as vaccination rates fall, the number of vulnerable individuals increases past a critical threshold at which the likelihood of an infected person spreading the illness to another vulnerable individual is high. At that point the infection can spread throughout the vulnerable members like fire through brush that has just become dry enough to combust.

Children who are denied vaccination because of war deserve our sympathy. But parents who refuse to vaccinate their children because of misguided beliefs deserve our reproach. They do not just jeopardize the health of their children; they weaken herd immunity. Though what is happening in Syria is difficult to imagine in the US, it’s easy to imagine an earthquake or large storm temporarily disrupting sewage and water systems and moving large numbers of people into crowded shelters. In such a scenario unvaccinated people would be like dry kindling waiting for a spark. 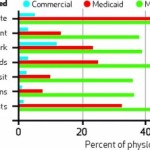